The margay (Leopardus wiedii) is a small wild cat native to Central and South America. A solitary and nocturnal cat, it lives mainly in primary evergreen and deciduous forest.

Until the 1990s, margays were hunted illegally for the wildlife trade, which resulted in a large population decrease. Since 2008, the margay has been listed as Near Threatened on the IUCN Red List because the population is thought to be declining due to loss of habitat following deforestation. 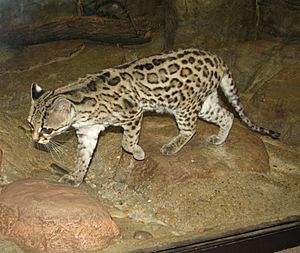 Its fur is brown and marked with numerous rows of dark brown or black rosettes and longitudinal streaks. The undersides are paler, ranging from buff to white, and the tail has numerous dark bands and a black tip. The backs of the ears are black with circular white markings in the centre.

Most notably the margay is a much more skilful climber than its relative, and it is sometimes called the tree ocelot because of this ability. The margay may spend its entire life in the trees, leaping after and chasing birds and monkeys through the treetops. 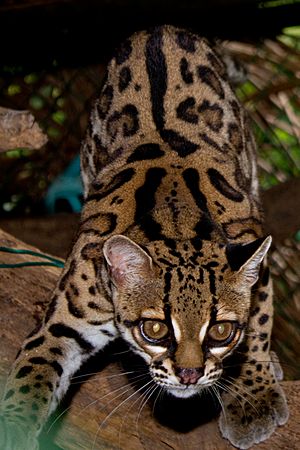 The margay is mostly nocturnal. Like most cats, they are solitary. They have large home ranges of 11 to 16 square kilometres (4.2 to 6.2 sq mi). They use scent to mark their territory (urine spraying) and leave scratch marks on the ground or on branches. Their vocalisations are short range: they do not call to each other over long distances.

The margay is one of only two cat species with ankles flexible enough to climb head-first down trees. The other is the clouded leopard; the little-studied marbled cat may also have this ability.

The margay is very agile; its ankles can turn up to 180 degrees, it can grasp branches equally well with its fore and hind paws, and it is able to jump up to 12 feet (3.7 m) horizontally. The margay has been seen to hang from branches with only one foot, and can run upside down beneath branches. 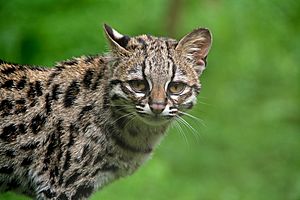 A margay at Parc des Félins in France

The margay is found from southern Mexico, through Central America and in northern South America east of the Andes. The southern edge of its range reaches Uruguay and northern Argentina. They are found almost exclusively in areas of dense forest, ranging from tropical evergreen forest to tropical dry forest and high cloud forest. Margays have sometimes also been observed in coffee and cocoa plantations.

Fossil evidence of margays or margay-like cats has been found in Florida and Georgia dating to the Pleistocene, suggesting that they had a wider distribution in the past. The last record from Texas was from 1852.

It eats small mammals (sometimes including monkeys), birds, eggs, lizards and tree frogs. The margay is able to hunt its prey entirely in trees. However, they do sometimes hunt on the ground, and have been reported to eat cane rats and guinea pigs. During the day, they rest in safe branches or clumps of lianas. There is a report of a margay using sound mimicry to lure a prey. 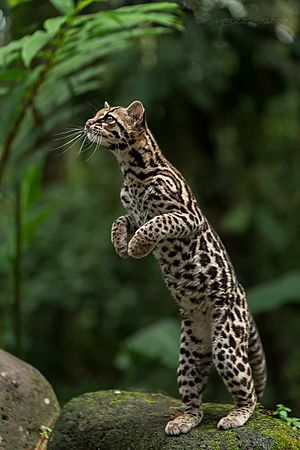 Gestation lasts about 80 days, and generally results in the birth of a single kitten (very rarely, there are two) usually between March and June. Kittens weigh 85 to 170 grams (3.0 to 6.0 oz) at birth. This is relatively large for a small cat, and is probably related to the long gestation period. The kittens open their eyes at around two weeks of age, and begin to take solid food at seven to eight weeks. Margays reach maturity at twelve to eighteen months of age, and have been reported to live more than 20 years in captivity.

A 26-year-old margay named Carlota lives at the Cincinnati Zoo and Botanical Garden as of April 2018.

Infants suffer from a 50% mortality rate. Coupled with the problems they have breeding in captivity, this makes the prospect of increasing the population very difficult.

It has ten subspecies over a large geographical range from Mexico to Argentina. Its past range even included the southern United States.

They are hunted mainly for their fur and this has resulted in a large population decrease - around 14,000 are killed a year. They also suffer from a loss of habitat, which is also a significant part of this decline.

All content from Kiddle encyclopedia articles (including the article images and facts) can be freely used under Attribution-ShareAlike license, unless stated otherwise. Cite this article:
Margay Facts for Kids. Kiddle Encyclopedia.