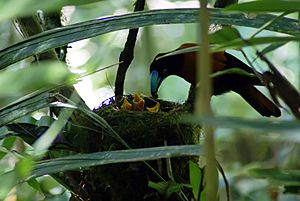 The helmet vanga is the iconic bird species of Marojejy National Park.

Marojejy National Park is noted for its rich biodiversity, which can appeal to both scientist and ecotourist. There are a wide range of habitats within the park, and many of its plants and animals are endemic to the area. Scientific expeditions regularly discover species that are either not previously documented in Marojejy, or in some cases, completely new to science. Some new species are highly endangered. In the case of many large groups, such as invertebrates, very little is known and much remains to be discovered.

The vegetation of Marojejy National Park is extremely diverse due to the various microclimates. The microclimates also affect plant growth rates, with the wet eastern slopes showing faster plant growth, the dry western slopes exhibiting slower plant growth, and the plants on the ridge tops hindered by high winds and poor soils. More than 2,000  species of flowering plants (angiosperms) have been discovered at the park so far. At least four plant families are found at all elevations: Clusiaceae and Poaceae are generally common, while Myrsinaceae and Elaeocarpaceae are rare.

There are four basic types of forest found at Marojejy: 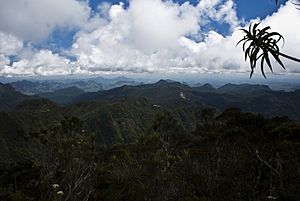 Sclerophyllous montane cloudforest, as seen from the summit, has shorter trees than the forests in the lowland areas.

Of the many plant species found in Marojejy, 35 are palms, several of which are critically endangered and have extremely low populations. Only three of these palm species can be found outside of Madagascar, and seven can only be found at Marojejy. More than 275 fern species are present in the rainforests of the massif, 18 of which are tree ferns and seven are found only at Marojejy. Many of these fern species are very rare and have highly restricted distributions.

Marojejy also contains several types of rare rosewood and palisandre (genus Dalbergia), all of which are endemic to Madagascar. Rosewood, or andramena in Malagasy, is a type of hardwood with a lustrous deep red color, while palisandre, such as Dalbergia madagascariensis, lacks the red color. Of the three species of Dalbergia found in Marojejy, D. madagascariensis and D. baronii are listed as "vulnerable" on the IUCN Red List, while D. louvelii is listed as "endangered." The park has few large specimens of the former two due to overexploitation, and specimens are rarely found in the surrounding 5 km (3.1 mi) surrounding the park. The latter, D. louvelii, is not found outside of the park.

The Madagascar paradise-flycatcher is one of many species of bird found at Marojejy.

Marojejy National Park is best known for its two iconic species, the helmet vanga (Euryceros prevostii) and the critically endangered silky sifaka or simpona (Propithecus candidus). The silky sifaka has been listed as one of "The World's 25 Most Endangered Primates" since the inception of the list in 2000. According to estimates, fewer than 1,000 individuals of this species remain, and none exist in captivity.

The wealth of species of well-known groups of animals demonstrates the depth of the biodiversity found at Marojejy National Park. For example, 75 of the 118 species of birds (64%) found in or around Marojejy are forest-dwelling birds, a total that surpasses any other mountain site in Madagascar. All of these forest-dependent bird species are endemic to Madagascar and utilize the forest for some portion of their life-cycle. One of these birds is the Madagascar serpent-eagle (Eutriorchis astur), which prior to being reported in 1990, had not been seen by ornithologists since 1932.

In addition to the silky sifaka, Marojejy is home to 10 other species of lemur, several of which are also endangered due mainly to habitat loss. The nocturnal aye-aye has only been seen once at the park, although one old nest and traces of its feeding have been found at various elevations. Other mammals include at least 15 species of tenrec, seven species of native rodent, the fossa (Cryptoprocta ferox), and the Madagascar sucker-footed bat (Myzopoda aurita)

The reptile and amphibian diversity at Marojejy is also rich, higher than any other protected area in Madagascar. A total of 148 species have been inventoried, and 17 of these are found only in Marojejy, including Brookesia karchei and Chamaeleo peyrieresi, two species of several chameleons found there. The panther chameleon (Furcifer pardalis), leaf-tailed geckos (genus Uroplatus), and many species of frogs are also reported from this locality. Invertebrates include large millipedes, spiders, and an abundance of small leeches. 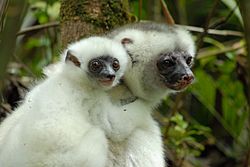 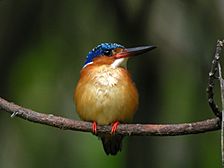 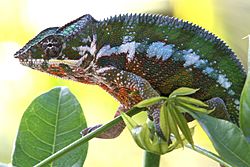 Marojejy National Park is rich in biodiversity and is home to the critically endangered silky sifaka (left), the Malagasy kingfisher (center), and the colorful panther chameleon (right).

Three camps located at different altitudes allow visitors to sleep in the forest. Bungalows made of wood and tarpaulin, shelter meals, a kitchenette with the availability of coal and stove and a toilet and a shower.

It was estimated that between 23 325 and 46 650 trees of Rosewood were cut down illegally in national parks Marojejy and Masoala for 2009.

All content from Kiddle encyclopedia articles (including the article images and facts) can be freely used under Attribution-ShareAlike license, unless stated otherwise. Cite this article:
Marojejy National Park Facts for Kids. Kiddle Encyclopedia.