Kids Encyclopedia Facts
Not to be confused with Martin Peak (Methow Mountains).

Martin Peak is an 8,511-foot (2,594-metre) mountain summit located in the North Cascades, in Chelan County of Washington state. Martin Peak is situated 80 miles northeast of Seattle, and 3 mi (4.8 km) northwest of Holden, in the Glacier Peak Wilderness, on land managed by the Wenatchee National Forest. Martin Peak ranks 56th on Washington's highest 100 peaks, and 54th on the "Bulger List". The nearest higher neighbor is Bonanza Peak, 2.35 miles (3.78 km) to the west, and Riddle Peak lies 3.7 miles (6.0 km) to the east-southeast. Precipitation runoff from the mountain and meltwater from the glacier in the east cirque drains into nearby Lake Chelan via Railroad Creek and Company Creek. Topographic relief is significant since the southern aspect of the mountain rises 4,900 feet above the Railroad Creek Valley in approximately 2 mi (3.2 km). The first ascent of the peak was made in July 1936 by Ida Zacher Darr.

Lying east of the Cascade crest, the area around Martin Peak is a bit drier than areas to the west. Summers can bring warm temperatures and occasional thunderstorms. Most weather fronts originate in the Pacific Ocean, and travel northeast toward the Cascade Mountains. As fronts approach the North Cascades, they are forced upward by the peaks of the Cascade Range, causing them to drop their moisture in the form of rain or snowfall onto the Cascades (Orographic lift). As a result, the North Cascades experiences high precipitation, especially during the winter months in the form of snowfall. With its impressive height, Martin Peak can have snow on it in late-spring and early-fall, and can be very cold in the winter. 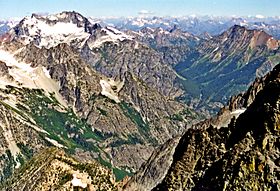 The history of the formation of the Cascade Mountains dates back millions of years ago to the late Eocene Epoch. With the North American Plate overriding the Pacific Plate, episodes of volcanic igneous activity persisted. Glacier Peak, a stratovolcano that is 16.5 mi (26.6 km) west-southwest of Martin Peak, began forming in the mid-Pleistocene. In addition, small fragments of the oceanic and continental lithosphere called terranes created the North Cascades about 50 million years ago.

All content from Kiddle encyclopedia articles (including the article images and facts) can be freely used under Attribution-ShareAlike license, unless stated otherwise. Cite this article:
Martin Peak (Washington) Facts for Kids. Kiddle Encyclopedia.