Michigan Limestone and Chemical Company (a.k.a. "Michigan Limestone") operates the world's largest limestone quarry located near Rogers City, Michigan. It was founded in 1910; however, production didn't begin until 1912. Ownership of the quarry has changed a number of times in recent years, but it is still one of the country's largest producers of limestone. The limestone which it uses is found in the limestone deposit underground in the northeastern part of Northern Michigan near Alpena just south of Rogers City along the shore of Lake Huron. 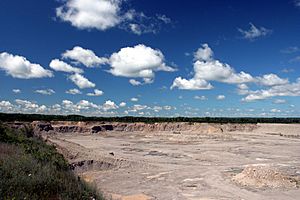 About 1908 or 1909, the geologist Henry H. Hindshaw established the commercial value of limestone in Northern Lower Michigan. Limestone is a raw material essential in industry for making steel, chemicals, and concrete. Hindshaw determined the value due to the especially high grade and purity of the limestone deposit underground in the northeastern region of Lower Michigan along the shore of Lake Huron, near Alpena and just south of Rogers City.

The quality and size of the limestone deposit at Rogers City, and the availability of easy water transportation, led to the development of the quarry and a port. Both quarry and port are named Calcite, after Calcite, the principal ingredient of limestone.

Michigan Limestone & Chemical Co. was formed in 1910 by New York investment banker William F. White and a group of investors who purchased a large block of land along the Lake Huron shore just south of the small lumbering community of Rogers (now Rogers City). It was the lumber industry that had brought the first settlers to the Rogers City area around the time of the Civil War. The first settlers arrived at Rogers in 1869 with the establishment of the Rogers-Molitor Lumber Company. 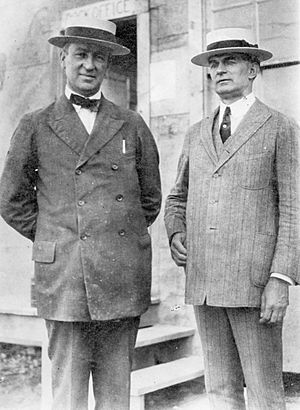 The lumber industry was the backbone of the economy in Rogers City and Presque Isle County until the second decade of the 20th century. By that time, most of the forests had been cut over and the major lumber companies were moving their camps to fresh forests in the Upper Peninsula of Michigan and into the states of Wisconsin and Minnesota. It was about that time that Michigan Limestone and Chemical Company began mining limestone.

White, who continued to live in New York City, served as President of Michigan Limestone. In 1911, Carl D. Bradley was hired as General Manager of the Calcite Plant. Bradley oversaw construction of the limestone processing plant, which included a powerhouse, crusher, mill or screenhouse, conveyor distribution system, harbor, loading slip, ship loader, repair shop, and office building. Steam shovels were purchased for use in mining, and steam locomotives and dump cars were used to move the stone from the quarry to the crusher. Production at the quarry began in early 1912 and the first cargoes of stone were shipped in June of that year.

Most of the stone mined at the Rogers City quarry was shipped on lake freighters to steel mills located along the lower Great Lakes at places like Detroit, Cleveland, Gary, and South Chicago. For most of the plant's history, its biggest customer was United States Steel (Also known as U.S. Steel.), the world's largest producer of steel products. Eventually, additional markets were found for the limestone in the agricultural, construction, chemical, and cement industries. The Rogers City area continued to develop and grow as the Calcite Plant grew. Within 20 years, the quarry at Rogers was the world's largest producer of limestone.

Michigan Limestone and Bradley Transportation came under the full ownership of U.S. Steel upon Bradley's death in 1928. At that time U.S. Steel purchased all of the stock of both Michigan Limestone and the associated shipping concern, Bradley Transportation, and made both these companies subsidiaries of U.S. Steel. The company became a division in 1951 when the operations at Rogers City became U.S. Steel’s "Northern District", since the main offices were moved to Detroit. The operation is still a major employer in northern Michigan. Its ownership has changed several times in recent years. Since 2008 it has been owned by Carmeuse, a Belgium-based major international producer of lime-based products.

The limestone produced at Michigan Limestone is high quality and almost pure white. Steel mills added limestone to molten iron in the blast furnaces. It is used to carry away impurities in the process of making steel. The material is also in widespread use in making cement. The limestone also produces just pure lime, which is used in everything from glass manufacturing, paint fabrication, baking powder assembly and ammonia production.

Self-unloading ships of the company 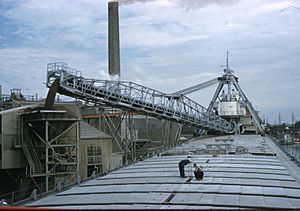 Michigan Limestone and Chemical Company built three ships between 1912 and 1917. They were named SS Calcite, SS W.F. White and SS Carl D. Bradley (in 1927, this ship would be renamed John G. Munson, and a new SS Carl D. Bradley would be built). These ships were revolutionary in their own right. They represented the latest technology in "self-unloading" ships, then simply called "unloading ships".

In 1912, the company built its first steamship, SS Calcite. It was considerably larger than the first modern self-unloader ever built on the Great Lakes. That ship was the SS Wyandotte and was built in 1908 for the Michigan Alkali Company of Wyandotte, Michigan, better known as Wyandotte Chemical Co. The ship was used to haul limestone from the company's quarry at Alpena, Michigan, to their manufacturing plant on the Detroit River south of Detroit. The steamships W.F. White and Carl D. Bradley followed over the next few years. All the steamships' hulls were painted grey to minimize the appearance of the limestone dust that accumulated during loading and unloading. 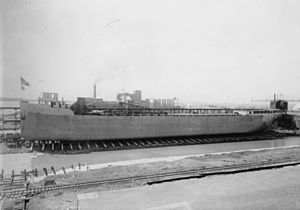 The design of these early self-unloaders was pretty much the same as today. The idea is that the "cargo hold" is built with its sides sloping toward the center of the ship along the keel. Where the two sides come together, a series of steel gates can be opened. This allows the material to drop onto a conveyor belt running the length of the ship beneath the "cargo hold." The conveyor belt carries the material up to an exchanger, where it is transferred to a second belt which runs up to the main deck, then through a long boom on deck. The unloading swing boom hangs over the ship's side to discharge the material load onto the waiting customer's dock. The advantage of self-unloaders is that they can deliver the limestone material directly to a customer's dock without requiring expensive shoreside unloading rigs.

As business grew over the years, the company built several more of these self-unloaders. These ships were operate under the name Bradley Transportation Company after 1920 and were known as the Bradley boats or the Bradley fleet. There are self-unloaders today that carry limestone from the Calcite plant through the Port of Calcite to industrial ports all around the Great Lakes.

The SS Carl D. Bradley was lost in a storm in November 1958 while returning from delivering a load of limestone; 33 of the 35 crewmembers died, most of whom lived in or around the small town of Rogers City. No larger loss of lives has occurred in the lake freighter fleet since the Bradley's sinking.

There is a Michigan State Historic Site historical marker at a viewing point over Michigan Limestone and Chemical Company facilities that reads:

All content from Kiddle encyclopedia articles (including the article images and facts) can be freely used under Attribution-ShareAlike license, unless stated otherwise. Cite this article:
Michigan Limestone and Chemical Company Facts for Kids. Kiddle Encyclopedia.