Moca is a municipality of Puerto Rico located in the north-western region of the island, north of Añasco; southeast of Aguadilla; east of Aguada; and west of Isabela and San Sebastián. Moca is spread over 12 wards and Moca Pueblo (The downtown area and the administrative center of the ville). It is part of the Aguadilla-Isabela-San Sebastián Metropolitan Statistical Area.

The name of Moca comes from the tree Andira Ínermis whose beautiful pink/purple flowers expose their presence, which are very common in this region.

The Moca tree was officially adopted as the representative tree of the town on February 19, 1972. Moca is famous for its Mundillo lace. Mundillo is the Puerto Rican name for handmade bobbin lace. It is almost synonymous with the small town of Moca.

Moca known as "La Capital del Mundillo" (The capital of lace) it was founded by Don José de Quiñónez on June 22, 1772. Diverse versions exist on the date of its foundation. Manuel de Ubeda and Delgado, in his "Isla de Puerto Rico. "Estudio histórico, geográfico y estadístico", published in San Juan in 1878, says to us that it was founded on 1774. On the other hand, Cayetano Coll y Toste, in the "Boletín histórico de Puerto Rico", maintains that it was founded on June 22, 1772.

On August 14, 1898, The United States Armed Forces entered and took the town of Moca finding no resistance. On August 8, 1898, after the Spanish–American War officially ended, Puerto Rico became a United States territory as an outcome of the Treaty of Paris of 1898. 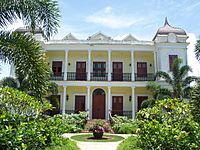 The Labadie Mansion inspired Enrique Laguerre to write La Llamarada. The property was restored as a museum and renamed the Palacete Los Moreau, in honor of Laguerre’s fictional characters. 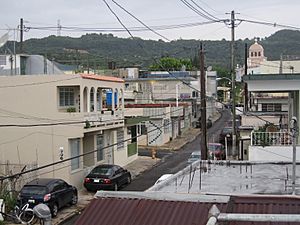 Climate: Tropical with hardly noticeable seasonal changes. Temperatures throughout the year range between 76 and 98 degrees Fahrenheit (24 to 37 °C).

On May 16, 2010, Moca was the epicenter of a strong 5.8 earthquake. The earthquake was felt in the entire island and also in the Dominican Republic and the Virgin Islands. Damage was reported in various towns.

Moca has a Double-A Baseball team called the Moca Vampiros that play in the Superior Baseball League.

Moca also had a volleyball team named "Los Rebeldes", which played in LVS (Liga de Voleibol Superior) through the years of 1998 to 2005. The team went to the post season every year, obtained a controversial second place in its 1998 final with the "Changos" of Naranjito. In addition, "Los Rebeldes" were National Champions against the "Changos" in the 2000 final. "Los Rebeldes" swept the "Changos" 4-0 in the finals, handing the "Changos" its most embarrassing finals defeat in the teams history.

It has oblong form. Divided in a silver-plated field and blue sky united by a purple rhombus (diamond shape), the color of the Moca flower. The rhombus has within religious symbolisms. The rhombus is surrounded, in its inferior part, by two branches of the Moca tree; in its superior part, an arc of eleven silver-plated five-point stars. Within the rhombus is a gold monogram (of the Virgin Mary) topped by a Christian crown of the same metal. A silver-lined crown in form of a three-tower castle crowns the shield. On the frontal portion of the crown, carved in gold, the word Moca. The stones of the castle are lined in blue. The doors and windows are purple.

All content from Kiddle encyclopedia articles (including the article images and facts) can be freely used under Attribution-ShareAlike license, unless stated otherwise. Cite this article:
Moca, Puerto Rico Facts for Kids. Kiddle Encyclopedia.