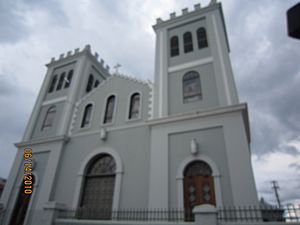 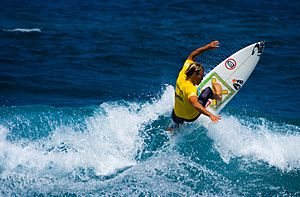 Isabela is a municipality of Puerto Rico located in the north-western region of the island, north of San Sebastián; west of Quebradillas; and east of Aguadilla and Moca. Isabela is spread over 13 wards and Isabela Pueblo (The downtown area and the administrative center of the city). It is a principal city of the Aguadilla-Isabela-San Sebastián Metropolitan Statistical Area.

The town is known as the "Jardín del Noroeste," the "Garden of the Northwest," because of the many wild flowers in its landscape. It is also knowns as el "Pueblo de los Quesitos de Hoja", the "town of Leaf Cheeses," for its production of this typical fresh white cheese wrapped in banana plant leaves, reputed to be the best. It is also known as la Ciudad de los Gallitos or the "City of the Fighting Cocks." Since the 18th century, cock fighting was very common throughout the island, and the town became famous and well known for the quality of its fighting cocks and special breeding and training techniques used by its people.

The chief Mabodamaca, one of the most important chieftains of the Island of Boriken (name for the island of Puerto Rico) during the firsts decades of the 16th century, ruled the region of the 'Guajataca' (Taíno name for the northwestern region of Puerto Rico) where Isabela was founded. Although the actual date of the origins of the first Spanish settlement is not precisely known, a small settlement/hermitage is known to have existed by the end of the 17th century or beginning of the 18th century in a great extension of land into what encompass today the municipalities of Isabela, Camuy and Quebradillas. The settlement bordered to the east with the shoreline of the Guajataca River and was located on the grounds of an earlier Taíno settlement.

Around 1725, José Antonio de Mendizábal y Azares, Governor of the Island of Puerto Rico granted authorization to base a population on the existing hermitage/village. Its given name, San Antonio de La Tuna, derives from the avocation of the Spanish settlers to the saint San Antonio de Padua and in honor of a wild cactus growing in the region (Tuna is the Spanish name for cactus). At the end of the 18th century San Antonio de la Tuna had a church, more than sixty houses, and almost 1,200 inhabitants, which was a considerable population for those times.

Prompted by economic and health factors, the decision to relocate the hermitage to a more favorable location was pursued. Around 1818, the village obtained authorization from then Governor Salvador Meléndez to transfer the population to a new location closer to the coast. . Meléndez approved the transfer request and a new town was founded the following year on May 21, 1819. In this same year the construction of the church began, which finished in 1824. In 1918 the church was damaged during a strong earthquake that affected the western region of the island, it was rebuilt soon after.

Geographically, the municipality of Isabela belongs to the Northern Coastal Plains. Running through the south, the Aymamón mountains, a prolongation of the Jaicoa Mountain Range that begins in the neighboring town of Aguadilla, boasts peaks of over 1,000 feet (300 m) above sea level. The most prominent hills that are part of these mountains are La Bandera (Galateo Alto ward) at 1,207 ft (368 m); La Silla (Arenales Alto ward) at 1,106 ft (337 m); El Sombrero (in Galateo Alto) at 1,083 feet (330 m); Indio (Planas ward) at 1,017 feet (310 m); and Monte Encantado (in Arenales Altos) at 919 feet (280 m) of elevation above sea level. The central part of the territory, which consists mostly of flatlands, the mountains does not surpass 656 feet (200 m) of height; the coastline flats (Bajuras), is slightly above sea level.

One of present Isabela's main industries is tourism, because it's a coastal city with several beautiful beaches, outstanding panoramic views and other diverse attractions such as its rainforest, rivers, lake, cordillera mountains, submarine rivers and caves and archaeological sites among others. It is visited by many local tourists as well as those seeking some sun and fun from the United States and other countries.

Isabela is also well known for its world-class surfing spots, and was the host site for two World Cup Surfing Championships in the 20th century.

Isabela had a basketball team that played at the Jose "Buga" Abreu Coliseum, the Isabela Roosters ("Gallitos de Isabela"). The team had average success. In 1987, one of its superstars, Frankie Torruella, was diagnosed with heart disease, and the trading of another star player, Edwin Pellot, to the Coamo team, hastened the team's fallout. In 1984, the team lost the championship, four games to two, to the Canovanas Indians team ("Indios de Canóvanas"). Between the mid-1970s and mid-1980s, the Bantams were serious championship contenders. In the late 1970s their star player, Mickey Coll, died in a motorcycle accident. The first home team's court was named after him. The Bantams where Isabela's home team until October 2005 when they moved the franchise to Guaynabo. The Playeras, a female volleyball team, played in Isabela for 2 seasons until they as well moved to Aguadilla becoming Las Divas.

The town also have their own classic cars club, called "Club de Autos Clasicos y Antiguos del Noroeste" (Classic and Old Car Club from Northwest). They also celebrate their own Exhibition of Classic Cars on the famous Coliseum on November.

The local basketball team was called the "Gallitos" ("Little Cocks," in reference to the slim, lightweight body of the fighting variety) due to the town's fame for quality fighting cocks. The name was translated literally into English as "Bantams", a variety of dwarf cocks.

The town has a cockfighting arena, traditionally called a "Gallera." Fights are customarily held on Sunday mornings, and the bet and stakes are controlled by the government of Puerto Rico, and pay prizes based on the fighting record of the cocks.

Isabela's flag derives its design, colors and symbolism from its Coat of Arms. It consists of three horizontal stripes of equal width. The top and bottom stripe are yellow and the center one green. The Coat of Arms may be superposed on the green stripe in the center. 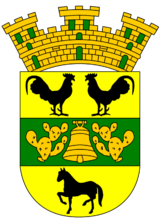 The Original Coat of Arms of Isabela

The town's coat of arms, dated 1819, is divided an olive tree in its center, symbolizes the first inhabitants of Isabela and of the island of Puerto Rico, the Igneris Indians. The gold represents the Taíno Indians (they made extensive use of gold), who lived in this area about two hundred years before the discovery of the island. The gold bell represented in the center stripe between two cactus is a symbol of the town of San Antonio de la Tuna. The two cocks represent the bravery of the inhabitants and Isabela's famous fighting cocks. The horse represents the cattle wealth of the region and honors the fine step horses (Paso Fino) for which Isabela is famous. The coat of arms is embellished with a mural crown having three towers, the standard emblem at the time for formally established 'pueblos' (townships) under Spanish rule. A new Coat of Arms is shown here; it depicts a revised mural crown with five towers to represent a city, but historically, only 11 communities in Puerto Rico were conferred this title under Spanish rule.

On the occasion of the celebration of 186 years of Isabela was necessary to adopt an ordinance to establish properly and historical veracity heraldic elements of the emblazoned shield and official seal of the City of Isabela. Next, information drafted pursuant to Ordinance Number 3, series 2005-2006 approved by the Municipal Legislature on August 5, 2005:

CONSTITUENT ELEMENTS OF THE SHIELD OF ISABELA (translated):

"The Mural Crown: Current mural crown that has the coat of Isabela has three towers. Due to population increase of over 50,000 inhabitants who had Isabela in this last decade, the HUD office in Washington DC, conferred status as a "city" to Isabela last year. Given this demographic reality and focused on the mural crown that represents the spirit of unity and growth of the inhabitants of our city of Isabela, we understand appropriate that the crown mural consists of "five" distinct towers that symbolize the passage from town to city."

THIS IS PUBLISHED IN A PAMPHLET EXPLANATION OF THE LEGISLATURE REGARDING THE MUNICIPAL COAT OF ISABELA. SAME WAS PREPARED BY GLORIA M PEREZ Secretary of the legislature in 2009 ....... Information courtesy of Adrian Augusto and Manuel Abreu

All content from Kiddle encyclopedia articles (including the article images and facts) can be freely used under Attribution-ShareAlike license, unless stated otherwise. Cite this article:
Isabela, Puerto Rico Facts for Kids. Kiddle Encyclopedia.