Aguadilla (Spanish pronunciation: [aɣwaˈðiʝa], Watered Smalls), founded in 1775 by Luis de Córdova, is a city and municipality located in the northwestern tip of Puerto Rico bordered by the Atlantic Ocean to the north and west, north of Aguada, and Moca and west of Isabela. Aguadilla is spread over 15 wards and Aguadilla Pueblo, the administrative center of the city. It is a principal city of the Aguadilla-Isabela-San Sebastián Metropolitan Statistical Area.

According to sources, a Taíno settlement called Amamón was located close to the Culebrinas River.

The present territory of Aguadilla was originally part of the territory of Aguada. In 1775, the foundation of Aguadilla by Don Luis de Córdova was approved. But it wasn't until 1780 that the territory was properly segregated, making the founding of the town official. Originally, Aguadilla was constituted by the Victoria and Higüey wards. This region was already inhabited and known as Aguadilla before 1770. In 1776, Fray Íñigo Abbad y Lasierra in his description of the towns of the island, mentioned it as the "new Town of San Carlos of the Aguadilla." Nevertheless, according to Dr. Agustín Stahl in his Foundation of Aguadilla, it was not until 1780 that the town was officially founded. The construction of a new church and the proceedings to become an independent village began in the 1775. 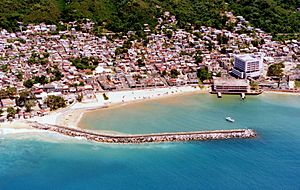 The population in the Village of Aguadilla continued to increase constantly mainly due to its excellent port and strategic location in the route of the boats. In 1776, when Santo Domingo became independent for the first time, the Spanish descended loyals emigrated to Puerto Rico, mainly to Aguadilla, which caused the population to continue increasing significantly. In 1831, according to Don Pedro Tomás de Córdova, the party of Aguadilla belonged to Aguada. At this time, the territorial organization of Aguadilla was as follows: Pueblo Norte (North Town), Pueblo Sur (South Town), Ceiba Alta, Ceiba Baja, Montaña, Malezas, Aguacate, Dos Palmas, Camaseyes, Plainela, Borinquen, Arenales, Higüey, Corrales, Victoria, and Mangual.

Don Pedro Tomás de Córdova mentions the road of Aguadilla formed by Punta Borinquen and San Francisco, as the "fordeadero of the ships that travel from Europe to Havana and Mexico". He adds that its "port is the most frequented in the Island due to the proportions that it offers to refresh all class of ship."

In 1860, Aguadilla was officially declared a village. Several years later, when the island was territorially organized into seven departments, Aguadilla became the head of the third department that included the municipalities of Aguada, Isabela, Lares, Moca, Rincon, and San Sebastián. In January 1841 a Royal Order transferred the judicial party from Aguada to Aguadilla. In 1878, according to Don Manuel Ebeda y Delgado, the territorial organization of Aguadilla had varied a little. At this time Plainela, Higüey, and Mangual wards are not mentioned. The Dos Palmas ward appears as Palmar. Also at this time, three new wards are mentioned: Guerrero, Caimital Alto, and Caimital Bajo. In 1898, even with the change of sovereignty in the island, the territorial organization of Aguadilla is the same to that of 1878. Nevertheless, in the Census of 1899, downtown Aguadilla appears constituted by Higüey, Iglesia, Nueva, Santa Barbara, and Tamarindo wards. Malezas ward appears subdivided into Maleza Alta and Maleza Baja. From that time, the territorial organization of Aguadilla did not change, until 1948, when the Puerto Rico Department of Planning prepared the map of the city and its wards, and following instructions of city authorities, Higüey and parts of Caimital Alto wards are annexed to Downtown Aguadilla.

Aguadilla was the site of the U.S. military's Ramey Air Force Base for almost five decades. During this period, Aguadilla was home to the Strategic Air Command 72d Bombardment Wing, Heavy equipped with B-52s, a very strategic facility during the Cold War. During the early years of the base and throughout World War II, Puerto Ricans in the area became more Americanized than in remote locations, and the after effects are still apparent in Aguadilla, and other towns like Aguada, Moca and Isabela.

The military and Puerto Ricans from the surrounding communities generally had good formal relations, but the undercurrent of resentment in many aspects of the relationship was always just below the surface. Many Americans stationed in the area did not even realize that the people all around them were even American citizens.

Though the infrastructure still exists, it was handed over to the Commonwealth of Puerto Rico in 1973. The aerial facilities are now civilian controlled by the Puerto Rico Ports Authority. The facilities now make up the Rafael Hernandez International Airport. The barracks now host the Faro Inn Suites, a 79-room hotel. The Officer's Club now hosts the Faro Conference Center, a 22,000-square-foot (2,000 m2) meeting facility. The hospital is now the Courtyard by Marriott Punta Borinquen Resort & Casino, a 150-room hotel with a casino and the first Marriott in Puerto Rico out of the San Juan Metropolitan Area.

There is still an active part of the base that hosts the Coast Guard Borinquen Air Station. There are also other government agencies based at Ramey. They include the United States Department of Homeland Security, U.S. Customs & Border Protection's Office of Air and Marine and Office of Border Patrol, the Fuerzas Unidas de Rápida Acción (United Forces for Rapid Action) of the Puerto Rico Police Department and the Puerto Rico National Guard.

The beginning of San Antonio Village was back in the mid-19th century. It was composed by 60 families. Originally the place where these families were located was known as Bajura de Vadi, place later to be known as San Antonio.

In 1918, as a consequence of the 1918 San Fermín earthquake, the village was totally destroyed by a tsunami. The families suffered the struggles cause by this natural disaster, due by the proximity of the village to the shore.

The residents of the village decided re-localize the village in a higher area further from shore. The new location was what today is known as Ramey.

At this new location prosperity was not to be delayed. Various leaders and commercial owners of the time, took a step to carry the village forward. Most of the poor houses disappeared.

The village's infrastructure started its evolution. Luis R. Esteves and Juan Garcia established the first two theaters in the area. A new was social club form, known as "Luz del Porvenir" (Light of the Future). A new school system was the pride of the village because it offered them the opportunity to give their children an education without having to go 9 miles (14 km) south downtown. There was also a new bakery and a post office, among other facilities. At this time, the village also began its Patron Festival.

The clothing industry was a major source of employment.

Prosperity and happiness came to an end, when the news that the Federal Government needed the land to build an air base that came to be known as Ramey Air Force Base. In September 1939, some 3,796 acres (15.4 km2) covered by sugar cane, was expropriated for the military at the cost of $1,215,000.

Since the foundation, the village has suffered three expropriations as a result of expansions to Ramey Air Force Base. This expropriations delayed and ended the plans to turn San Antonio into a town.

Today, the population of San Antonio consists of approximately 10 thousand people. It has a modern square, a Puerto Rico State Police Station, a coliseum, an industrial park, public housing, a baseball park, a public school system, shops, and many other, charasteristics of a small town. Also, as a characteristic of a town, has a flag and an emblem. The creation of the flag and emblem was done by Roberto Román Acevedo.

Tragedy on election day in 1944

On the early morning hours of November 7, 1944, Puerto Rico suffered the most violent railroad accident in its history in Aguadilla. Train No. 3 was traveling from San Juan to Ponce carrying passengers to their different hometowns for the island general elections to be held that same day. It stopped at the Jimenez Station in Aguadilla for a routine engineer and boilerman exchange with Train No. 4 which was heading towards San Juan. The engineer assigned to Train No. 3's ride from Jimenez Station to Ponce was Jose Antonio Roman, an experienced freight train engineer, but who had never worked in passenger travel. When the train left the station at 2:00 am, it was hauling 6 passenger cars with hundreds of commuters and two freight cars.

At 2:20 a.m. the train started to descend a hill section known as Cuesta Vieja (Old Hill) in Aguadilla at what some witnesses described as an exaggerated speed. When the train reached the leveling-off point at the bottom of the hill it derailed. The steam locomotive crashed into a ditch where it exploded and one of the freight cars crashed into one of the passenger cars, killing many inside. Witnesses described the scene as horrendous, with some accounts stating that parents were throwing their children out the windows to save them from the wreckage. Chief of Police Guillermo Arroyo stated that the locomotive (No. 72), the express car, and three second class passenger cars were completely destroyed. Oscar Valle, an Aguadilla correspondent to the local El Mundo newspaper, summarized the scene in a more dramatic way: "The locomotive suffered a terrible explosion as it derailed, and the impact was so strong that 3 passenger cars were converted into a fantastic mound of wreckage. In the end, 16 passengers lost their lives, including the engineer and the boilerman, and 50 were injured in the crash.

Aguadilla is located in the northwest coast of the island of Puerto Rico, in the Western Coastal Plains. It is bordered by the Atlantic Ocean in the north, the municipalities of Isabela on the east, and Moca and Aguada in the south.

According to the Department of Natural Resources, Aguadilla has the most beaches in the island, with nineteen. Some of the beaches are considered among the best for surfing, like Surfer's Beach, Gas Chambers, Crash Boat, Wilderness, among others. Because of this, Aguadilla has served as host to surfing competitions, like the ISA World Championship in 1988.

Other attractions of the town are Las Cascadas Water Park and the Aguadilla Ice Skating Arena, which is the only ice skating complex in the Caribbean.

Aguadilla is the site of several yearly celebrations and festivals. The most notable are:

Aguadilla is home to several professional and amateur sports teams. The most notable are the Aguadilla Divas of the Female Superior Volleyball League, and the Aguadilla Sharks of the Superior Baseball League (Double-A). The Divas play their home games in the Luis T. Diaz Coliseum in Downtown Aguadilla from January to March, while the Sharks play their home games at Luis A. Canera Marquez Stadium from February to May.

Aguadilla also had a professional basketball team called the Aguadilla Sharks, that played for the BSN league. This team was merged into the Cangrejeros de Santurce in 1998.

Aguadilla is also a place where many famous baseball players originate from. There are plans for a future ECHL Minor League Hockey franchise for the city.

As a whole, Puerto Rico is populated mainly by people from a Creole (born on the Island of European descent) or Spanish and European descent, with small groups of African and Asian people. Statistics taken from the 2000 census shows that 83.6% of Aguadillanos have Spanish or white origin, 5.0% are black, 0.2% are Amerindian, 0.2% Asian, 0.1% Native Hawaiian/Pacific Islander, 8.2% were Some other race, 2.8% Two or more races.

Rafael Hernández Airport is located in the city of Aguadilla. In recent years, it has seen a resurgence as an international airport in the island, with several airlines planning flights to the US from Aguadilla.

All content from Kiddle encyclopedia articles (including the article images and facts) can be freely used under Attribution-ShareAlike license, unless stated otherwise. Cite this article:
Aguadilla, Puerto Rico Facts for Kids. Kiddle Encyclopedia.