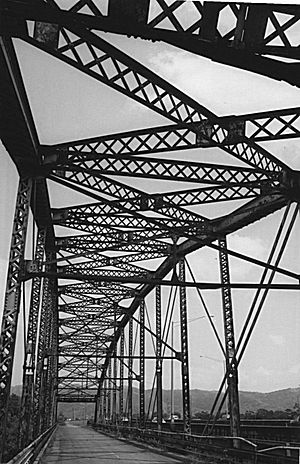 Añasco, named after one of its settlers, Don Luis de Añasco, is a municipality of Puerto Rico located on the west coast of the island bordering the Mona Passage to the west, north of Mayagüez, and Las Marias; south of Rincón, Aguada, and Moca and west of San Sebastián and Las Marias. It is part of the Aguadilla-Isabela-San Sebastián Metropolitan Statistical Area.

The town was founded on October 18, 1733 and named after Don Luis de Añasco, a colonist from the Extremadura region of Spain who came to Puerto Rico with Juan Ponce de León. Añasco was founded by the initiative of rich landowner Don José de Santiago, who wanted to establish the "villa" in properties owned by Don Luis de Añasco. The property was located on the margins of the río "Guaorabo", as the Taínos called it

Anasco town was preceded by the first settlement of San German. In November 1511, Juan Ponce de León handed over governorship to Juan Cerón, a lieutenant of the viceroy Diego Colon (son of Cristobal Colon or Cristopher Columbus). Cerón ordered Miguel de Toro, a lieutenant of Juan Ponce de León, to create a "Christian Village" in western Borinquen, calling it San German. This was the second attempt of foundation given in 1511 at the mouth of the Guaorabo River (present day Rio Anasco), near the area known today as Anasco, Puerto Rico. This first settlement was attacked in 1528, 1538, and again in 1554. A fort to protect this town began in 1540, but its construction was suspended in 1546 when the people decided to move inland being tired of attacks. Attacks by Carib Indians forced the population to move south inland to the present site of the present town of San German

In the 18th century, Añasco was the fourth most populous municipality in Puerto Rico, after San Germán, San Juan, and others. The Añasco River is also claimed to be the site of the popular legend of the drowning of the Spaniard Diego Salcedo in 1511 at the hands of the Taínos, proving the Spanish soldiers were not gods and igniting a revolt. It is believed that the revolt was led by the cacique Chayoán and suppressed by Spanish soldiers.

Many of the first settlers to the area came from the Canary Islands and the south of Spain. The 1918 San Fermín earthquake destroyed Añasco's parish church, the town hall and other structures, almost eliminating most of the historic downtown structures.

Añasco is located in the Coastal Plains of the west, bordered by the Río Grande de Añasco. It is bordered in the north by Rincón, Aguada, and Moca; Mayagüez to the south; and San Sebastián and Las Marías to the east. The Mona Passage lies to the west of the town.

The Añasco terrain is mostly plain, but features a series of hills and mountains like Canta Gallo (364 meters, or 1,194 feet), Gordo and Pichón (both at 340 meters, or 1,115 feet). It is also crossed by several rivers like Icaco River, Caguabo River, La Balsa, and others.

Añasco has a AA baseball team called the Fundadores de Añasco. It is also known for being the hometown of some amateur boxing prospects like Samuel D. Figueroa and Jonathan Badillo. Samuel D. Figueroa is now an undefeated professional boxer and holds a record of 2-0, 1 KO.

Like most of the people of Puerto Rico, the Añasco population originated with the Taino Indians and then by immigrants from Spain that settled the central highland, most prominently the Andalusian and Canarian Spanish migration who formed the bulk of the Jibaro or white peasant stock of the island. The Andalusian and Canarian Spaniards also influenced much of the Puerto Rican culture which explains the Southern Spanish dialect, and the Spanish colonial architecture. This area of the Island has an array of cultures that include the Basque, French, Corsican and Italian is highly predominant due to the introduction of coffee in this region of the Island.

The flag colors, design and symbolism is taken from the municipal Coat of Arms, with the only exception being that silver is painted white on the flag.

The green field of the shield contains a saber cross massed in black, outlined in silver, and has a gold scallop shell in each quadrant formed by the cross. A gold mural crown of three towers crests the shield.

All content from Kiddle encyclopedia articles (including the article images and facts) can be freely used under Attribution-ShareAlike license, unless stated otherwise. Cite this article:
Añasco, Puerto Rico Facts for Kids. Kiddle Encyclopedia.