The Museum of World Treasures is a world history museum in Wichita, Kansas, United States. Among the many items on display are Tyrannosaurus, Daspletosaurus, and Tylosaurus specimens (Including "Ivan the T. rex"), Egyptian mummies, signatures of all the American presidents, a section of the Berlin Wall, and a genuine shrunken head. The Museum of World Treasures is not limited to a particular era of history, but has opted to display an extremely diverse collection representing many different fields of interest and a wide range of subjects. This museum is a member of the American Alliance of Museums, but is not accredited by the organization.

The museum first opened as the Museum of Ancient Treasures on April 22, 2001, at the Garvey Building in Downtown Wichita. The bulk of the exhibits were originally from the collection of the museum's founder, Dr. Jon Kardatzke. As the Museum of Ancient Treasures began to attract more visitors, it asserted its dedication to serving and educating the community of Wichita. In the process, the museum began to attract more lifetime collectors who shared Kardatzke's passion for history; realizing the scope and aim of the museum, the collectors were honored to display their collections there.

In less than a year, the size and diversity of the museum's collection had changed. It now consisted of over 30 individual private collections, and spanned numerous significant events and cultures from prehistory to the present. Spurred by the purchase of three complete fossil dinosaur skeletons, the museum was forced to look for a larger space to exhibit its vast and growing collection.

The museum relocated to the "Farm and Art Market" in Old Town, Wichita, in 2003 and was renamed The Museum of World Treasures. The new location is a reconstructed three story warehouse that was completely renovated to house the expansive museum collection.

There have now been over 300 collectors who have their items stored and on display as loans or donations at the Museum. The museum owns approximately 75% of the artifacts

To provide a gateway to the past that educates, entertains and inspires lifelong learning.

The three stories of the museum contain a diverse array of historical artifacts. Access to the separate floors can be obtained via a central spiral staircase, or the popular glass elevator that rises above the towering dinosaur exhibit. The first floor also contains the entry foyer and Museum Store. 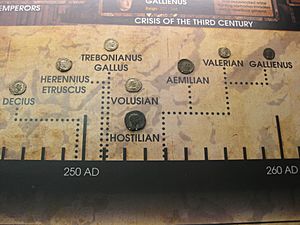 A piece of the 50 ft. long Timeline featuring all the Roman Emperors and their coinage.

The 1st floor of the museum focuses on fossils and ancient human history, as well as a room dedicated to geology. Exhibits of note are:

The 2nd floor of the Museum focuses on military history, presidents, and royalty from around the world. Exhibits of note are: 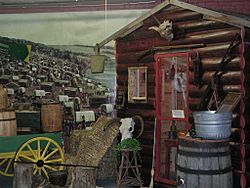 The exhibits on the 3rd floor feature an ensemble of material from American history. In addition, the top floor of the museum also has a large banquet room that can be rented out for private functions. Exhibits of note are:

The Museum of World Treasures is a not-for-profit 501(c)(3) Kansas corporation. Tax-deductible donations go directly to support the Museum's many educational programs. The Museum is governed by a Board of Directors.

The museum focuses heavily on educational outreach with programs such as:

All content from Kiddle encyclopedia articles (including the article images and facts) can be freely used under Attribution-ShareAlike license, unless stated otherwise. Cite this article:
Museum of World Treasures Facts for Kids. Kiddle Encyclopedia.