Music of Oregon facts for kids 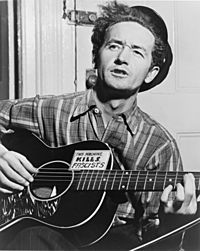 Woody Guthrie wrote several songs about the Northwest under the commission of the Bonneville Power Administration.

The music of Oregon reflects the diverse array of styles present in the music of the United States, from Native American music to the contemporary genres of rock and roll, country, rhythm and blues, jazz, pop, electronic music, and hip hop. However, throughout most of its history, the state has been relatively isolated from the cultural forces shaping American music. Much of modern popular music traces its roots to the emergence in the late 19th century of African American blues and the growth of gospel music in the 1920s. African American musicians borrowed elements of European and Indigenous musics to create new American forms. As Oregon's population was more homogeneous and more white than the United States as a whole, the state did not play a significant role in this history.

The state's main contributions to American popular music began in the 1960s, when The Kingsmen and Paul Revere & the Raiders established Oregon as a minor center of frat rock and garage rock. This led in one direction to the blues rock tradition of the Robert Cray Band and Curtis Salgado, and in another direction to the hardcore punk scene of the early 1980s Pacific Northwest, led by the Wipers in Portland and like-minded bands in Seattle and Vancouver, BC. Over the next twenty years, punk rock evolved into grunge, riot grrrl, alternative rock, and, eventually, indie rock. In the last decade, Oregon has made a unique contribution to American independent music, with a strong indie music scene developing in Portland. The city's reputation as a hipster mecca has paralleled the rise of local indie musicians such as The Decemberists (singer Colin Meloy attended the University of Oregon), Gossip, The Dandy Warhols, M. Ward, Logan Lynn, Storm Large, Pink Martini and the late Elliott Smith. Floater is Portland's leading example of an indie band. They have remained unsigned to a major label for over 20 years and have managed to be voted the best band of Portland for 2009 in addition to frequently selling out major venues like the Crystal Ballroom and the Aladdin Theater. Other prominent musicians have relocated to Portland, including Modest Mouse (of Seattle), Sleater-Kinney (of Olympia, Washington), The Shins (of Albuquerque, New Mexico), Spoon (of Austin, Texas), former Pavement leader Stephen Malkmus (of Stockton, California), singer songwriter Patterson Hood (of Muscle Shoals, Alabama, and Athens, Georgia), and former R.E.M. guitarist Peter Buck (of Berkeley, California and Athens, Georgia).

The state also has a unique rural-urban dynamic, which has influenced the development of local bluegrass, folk, and alternative country music. Jam bands have a strong presence in the state, dating back to Grateful Dead performances at the Oregon Country Fair, and outdoor music festivals continue to be popular. Portland's Waterfront Blues Festival is the second largest blues festival in the country. Prominent cultural institutions include the Oregon Bach Festival, Oregon Festival of American Music, Oregon Symphony, and Mt. Hood Jazz Festival.

All content from Kiddle encyclopedia articles (including the article images and facts) can be freely used under Attribution-ShareAlike license, unless stated otherwise. Cite this article:
Music of Oregon Facts for Kids. Kiddle Encyclopedia.