Visser's first sports were gymnastics and football; she took up athletics at age 13. She represented the Netherlands at the 2011 European Youth Olympic Festival in Trabzon, winning gold in both the 100 m hurdles and the 4 × 100 metres relay. Visser competed as a heptathlete at the 2012 World Junior Championships in Barcelona, placing eleventh with 5447 points. In 2013, she placed fourth in the heptathlon at the European Junior Championships in Rieti, scoring 5774 points; in the heptathlon's opening event, the 100 m hurdles, she ran 13.21 (+1.5) to break Dafne Schippers's Dutch junior record from 2011.

During the 2014 indoor season Visser set Dutch indoor junior records in both the 60 m hurdles and the pentathlon; as of 2015[update], her pentathlon score of 4268 points ranks her ninth on the world all-time junior list. Outdoors, Visser competed in the Götzis Hypo-Meeting for the first time, scoring a personal best 6110 points and placing 14th. At the 2014 World Junior Championships in Eugene, Oregon she took part in both the heptathlon and the 100 m hurdles, winning bronze medals in both events; in the hurdles she broke 13 seconds for the first time, her time of 12.99 (+1.9) setting a new Dutch junior and under-23 record. Visser qualified for her first senior European Championships that summer, representing the Netherlands in the 100 m hurdles; she ran 13.12 (-2.0) in the heats and was narrowly eliminated from the semi-finals.

In 2015 Visser became Dutch senior champion for the first time, winning the 60 m hurdles in 8.12 at the national indoor championships in Apeldoorn; she was selected for the European Indoor Championships in Prague, despite not quite meeting the national federation's qualification standard. In Prague she qualified from the heats on time, but fell in her semi-final and was eliminated. Outdoors, Visser improved her national under-23 hurdles record to 12.97 (+1.4) at the FBK Games in Hengelo on May 24; the following week, she placed 5th in the Hypo-Meeting with a personal best 6467 points. Before the 2015 European U23 Championships in Tallinn Visser had reached the qualifying standard in five events (100 m, 200 m, 100 m hurdles, long jump and heptathlon); she chose to compete in the hurdles and the long jump, winning a bronze in the hurdles with a time of 13.01 (-0.2).

At the 2015 European U23 Championships Visser won a bronze in the 100 m hurdles. She went on to compete at the 2015 World Championships in Athletics in Beijing (China), finishing 8th at the heptathlon. She was also the start runner of the Dutch 4x100 meters relay team with Dafne Schippers, Naomi Sedney and Jamile Samuel that finished 5th in 42.32 in the final, but was disqualified for a changeover infringement. In the heats the team had also run 42.32, a new national record. At the end of the summer season she finished 3d at the Décastar heptathlon in Talence (France).

At the 2016 European Athletics Championships 100 m hurdles in Amsterdam, she was eliminated in the semifinals. At the Athletics at the 2016 Summer Olympics heptathlon in Rio de Janeiro (Brazil), she finished at a disappointing 19th place. 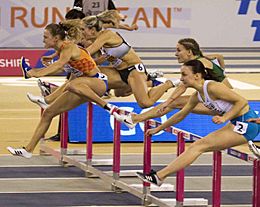 The 2018 season started with a bronze at the World Indoor Championships 60m hurdles. She had clocked 7.83 to win her semi-final, obliterating Marjan Olyslager’s Dutch record of 7.89 which had stood since 1989. In consultation with her coach Bart Bennema, Visser had to make a decision about her future: the heptathlon or high hurdles. With the 2018 European championships in Berlin on the doorstep and given her chances of victory on the hurdles at that event, she decided to concentrate on hurdling. In June 2018, at the Diamond League in Stockholm she ran a new national record on the 100 m hurdles in 12.71, breaking the almost 30-year old record of Olyslager from 1989. She finished fourth at the 2018 European Athletics Championships in 12.88.

In 2019, she started with winning the 60 m hurdles' title at the 2019 European Athletics Indoor Championships. At the 2019 World Athletics Championships in Doha she finished sixth in the 100 m hurdles final. She had broken her own national record in the semi-finals, clocking 12.62 (1.0).

All content from Kiddle encyclopedia articles (including the article images and facts) can be freely used under Attribution-ShareAlike license, unless stated otherwise. Cite this article:
Nadine Visser Facts for Kids. Kiddle Encyclopedia.