Nambour is a rural town and locality in the Sunshine Coast Region, Queensland, Australia. In the 2016 census the locality of Nambour had a population of 11,187 people.

Nambour is 101 kilometres (63 mi) north of the state capital, Brisbane. The town lies in the sub-tropical hinterland of the Sunshine Coast at the foot of the Blackall Range It was the administrative centre and capital of the Maroochy Shire and is now the administrative centre of the Sunshine Coast Region. The greater Nambour region includes surrounding suburbs such as Burnside, Coes Creek, and Perwillowen. 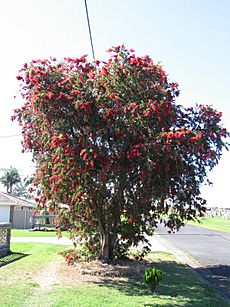 The name is derived from the Aboriginal word "naamba", referring to the red-flowering bottle brush Callistemon viminalis. 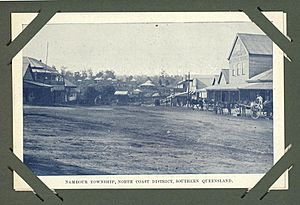 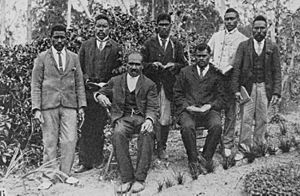 In 1862, Tom Petrie with 25 Turrbal and Kabi Kabi men including Ker-Walli, Wanangga and Billy Dinghy entered Petrie's Creek with the view to exploit the large cedar growing in the vicinity. They encountered some resident Aboriginal people with whom they had a traditional ceremony together. Petrie's group afterwards made a permanent logging camp further up the creek in the area now known as Nambour. At this camp, the Aboriginal workers requested that Petrie brand them with his logging symbol. With a piece of prepared glass, he cut his logging symbol of a P inside a circle into each of the men's arms. These Aboriginal workers, as well as local Maroochy men such as Puram, worked hard, returning frequently with Petrie to build the roadway, fell the timber and transport the logs downriver. The Nambour area had its first permanent European settlement in 1870. The town was then still just called Petrie's Creek.

Petrie's Creek Post Office opened on 1 June 1888 (a receiving office had been open from 1885, originally known as Carrollo) and was renamed Nambour by 1890.

In 1890 the Maroochy Divisional Board was established.

In 1891, the North Coast railway to Brisbane was completed, and at its opening Petrie's Creek was renamed "Nambour", after the Nambour cattle station.

The Moreton Central Sugar Mill Cane Tramway was constructed from 1897. It was used to transport passengers and sugar cane. The tramway closed at the end of 2001. Much of the track and signal lighting still remains. A section of the track can still be seen in central Nambour along the roadway of Mill, Currie and Howard Streets.

A fire in 1924 destroyed many of the timber buildings along the main street.

The Nambour branch of the Queensland Country Women's Association was founded on 1 November 1928. In 1931 they established their QCWA Rest Rooms in the Shire Hall. In September 1958 they officially opened their own building at 10 Short Street (still in use today).

St Joseph's Primary School was opened on 2 February 1925 by the Good Samaritan Sisters. From 1940 to 1977 it also provided secondary schooling, an arrangement that ended when St Joseph's High School was established in 1977.

In 1977 the Catholic Education Office established St Joseph's High School. In 1979 it moved to a new location in Burnside and in 1985 was renamed St John's College.

The town was bypassed by the Bruce Highway on 16 October 1990, which now forms the locality's north-eastern boundary. This alleviated most of the local traffic congestion.

Nambour Centre for Continuing Secondary Education opened on 4 February 1991. It was subsequently amalgamated into the Nambour State College.

The Nambour & District Historical Museum, more widely known as the Nambour Museum began with an opening ceremony held on 20 April 1996. 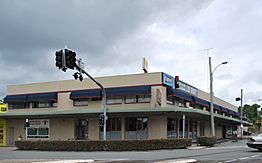 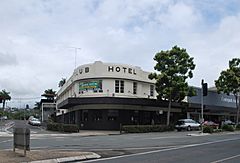 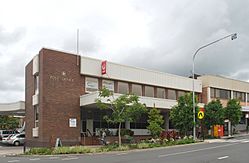 Nambour has a number of heritage-listed sites, including: 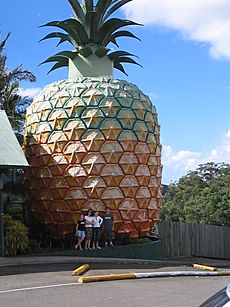 Nambour's primary industry has been sugar, with extensive cane fields surrounding the town, and the Moreton Central Sugar Mill in the town centre. The mill itself began operating in 1897 until it was closed in 2003.

The future of the sugar industry in the area is in doubt, with a number of former cane farms being converted to grazing cattle, turf farms or sold to property developers. Other industries in the area include tourism, and the growing of tropical fruits.

Situated near Nambour is the Queensland Government's Maroochy Research Station which is a major subtropical fruit and nut research and extension centre. The 61 ha research facility was established in 1945, and has an office and laboratory complex, glasshouses, netted orchards, postharvest coolrooms and a biotechnology facility. With access to national and international funding sources, specialist staff often work in conjunction with investigators from other research agencies.

The Big Pineapple tourist attraction on the southern outskirts of the town reflects both of these pursuits.

Other tourist attractions include Thrill Hill Waterslide Park, and the Big Macadamia nut. 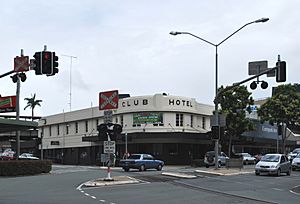 Railway lines run through the centre of Nambour

The TransLink Transit Authority (known as TransLink) is the authority that coordinates and integrates the public rail and bus services in South-East Queensland, of which Nambour is in Zone 6.

Nambour is serviced by several Queensland Rail passenger trains, including the Tilt Train and is approximately one and a half hours north of Brisbane by rail. Regular services depart from Nambour railway station and use the Sunshine Coast line.

The region connected to Brisbane via the Bruce Highway which forms part of the M1 motorway.

Greyhound Australia interstate coach operators also operate daily bus services to Brisbane using the major corridors. The local bus service is operated by Sunbus Sunshine Coast which has various routes between Nambour and Noosa and the Sunshine Coast, including one via Eumundi.

In addition, other suburbs of Nambour include the following schools: 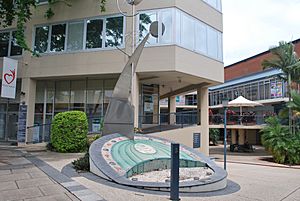 A sculpture in Nambour

The Nambour Civic Centre is an arts and entertainment venue that includes cinema, music, theatre, dance and other events. The Nambour Lind Lane Theatre is another live theatre venue.

Nambour Originals (sibling of Peregian Originals held at Peregian Beach) is an open air community event that involves live music in a picnic style format. It is held at 1pm every 2nd and 4th Sunday of each month at Quota Park Amphitheatre on Matthews Street. The facilities at Quota Park include barbecues, a sheltered area, shady trees, a kids play area, toilets and parking.

The Nambour Festival, which began as the Nambour Sugar Festival in the 1980s, has been held at Quota Park since 2008. The festival showcases local musicians, entertainers, cooking demonstrations, local produce, a diverse range of activities for children, and market stalls.

The Queensland Home Garden Expo is a three-day gardening event held at the Nambour Showgrounds.

Nambour is the fifth town mentioned in the original (Australian) version of the song "I've Been Everywhere".

Nambour is also in the television broadcast licence areas of Brisbane (metro), enabling most areas of the Sunshine Coast to receive the commercial Brisbane stations.

Many community access stations, as well as some Brisbane stations can also be received.

The Sunshine Coast Regional Council operates a public library in Nambour at the corner of Bury and Currie Streets.

The Nambour branch of the Queensland Country Women's Association meets at 10 Short Street. 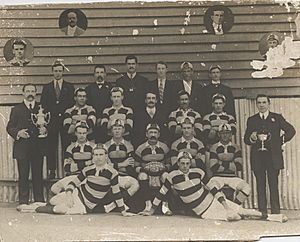 Nambour has a number of amateur sporting clubs including:

The Nambour Wildcats Soccer Club is part of the Sunshine Coast Churches Soccer Association and was established in 1976, it is one of the largest sporting clubs in the region with over 350 players from U6 to senior Mens, Ladies and Over 35's.

The Nambour Crushers Rugby League Club was established in 1985. The grounds are situated at 22 Crusher Park Drive. The Crushers have teams in all grades from Under 7s to A Grade and number approximately 300 players.

The Nambour Rugby Union Club entered the Sunshine Coast District Rugby Union Competition in 1981. The club is known as the "Toads". The club's ground is situated on Laidlaw Road in nearby Woombye. Nambour fields four "Senior" sides in the Sunshine Coast Competition: A Grade, Reserve Grade and U19's as well as a women's team. A junior club with teams from under 7s through to under 17s also runs. Nambour were local premiers in 1912 and 1913.

The Nambour and Districts Netball Association is made up of clubs from Yandina, Burnside, Nambour, Woombye, Palmwoods and the school based Saints club.

Nambour Cricket Club is part of the Sunshine Coast Cricket Association and has played on the Nambour showgrounds since the early 1890s when a Nambour team competed against teams from nearby towns.

The Nambour Aquatic Centre is located in Petrie Park and has heated pools all year round. The complex offers a variety of activities including a 50m heated pool, a 25m heated enclosed pool, toddler pools and fountains/play area, a learn to swim program, aqua aerobics classes, and a poolside cafe.

According to the 2016 census of Population, there were 11,187 people in Nambour.

All content from Kiddle encyclopedia articles (including the article images and facts) can be freely used under Attribution-ShareAlike license, unless stated otherwise. Cite this article:
Nambour Facts for Kids. Kiddle Encyclopedia.