The city of Newport is the county seat of Orleans County, Vermont, in the United States. As of the 2010 Census, the city population was 4,589. The city contains the largest population of any municipality in the county, yet encompasses the smallest area. It is the second smallest city by population in Vermont.

In 1753, the Abenakis brought the ransomed John Stark down Lake Memphremagog and came ashore where Newport is now situated. They then traveled southeast to his home in New Hampshire.

Rogers' Rangers were forced to retreat through the county following their attack on Saint-Francis, Quebec in 1759. To confound their avenging pursuers, they split up on the east shore of Lake Memphremagog. One group followed the Clyde River east. Another followed the Barton River south.

Newport as a settlement began in 1793. The village was first called Pickeral Point, but later renamed Lake Bridge for its location at the head of Lake Memphremagog.

In the early 19th century, the women of pioneer Calvin Arnold's household, refused to live in the Arnold house near what is now Clyde Pond, because of depredations by the Indians.

In 1816, part of the former town of Salem, was annexed to Newport town, and is now part of the city.

The railroad reached the village in 1863.

The city had a scare when they received news of the St. Albans Raid during the American Civil War. They thought these raids might repeat throughout the state but particularly at the south end of the lake. The militia was turned out. The ferry from Magog was met with determined looking armed men, much to the captain's surprise, who had heard nothing about the raid. Armed Norwich University students were shipped in by train. Nothing happened and everyone was sent home in a few days.

In 1868, the Lake Bridge settlement was incorporated as the Village of Newport.

It became a busy lumber town. The firm of Prouty & Miller, a lumbering firm, was started in 1865. With the end of the lumbering concentration in Vermont, it went out of business in the 1980s. 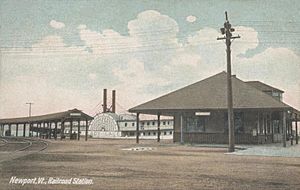 Railroad station and steamboat Lady of the Lake in 1908

The Lady of the Lake steam excursion/ferry boat started operating in 1867. It stopped operations in 1917. This is used as Newport's logo.

In 1868, a livery stable that would ultimately grow to 100 horses, started operating behind a hotel, several blocks from the railway station.

The Newport Wharf Light was a tower built on Lake Memphremagog in 1879. It has since been demolished.

The current county courthouse was built in 1886. That was the year that the legislature moved the shire town here.

In 1879, the Field Opera House and Clock Tower was constructed. In 1896, it was destroyed by fire. The municipal building is now at this site. 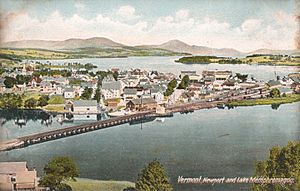 A postcard image of Newport around 1910

By the late 19th century, the Boston & Maine and Central Vermont railroads were routed through Lake Bridge and the small village experienced a population boom.

The now-historic Goodrich Memorial Library was built in 1899.

The Memphremagog Hotel burned in 1907. 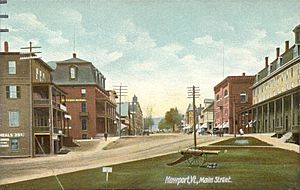 In 1917, the city of Newport was formed from portions of the towns of Newport (former village of Newport) and Derby (former village of West Derby). It was organized on March 5, 1918. There were four elementary schools named after the section of the city they were in: East, West, and South schools. Newport High was across from the West School. There were 60 businesses downtown; east, west and south had an additional 40 businesses.

The current federal courthouse was built in 1904. Then, it included the post office.

In August 1942, a single-engined Royal Canadian Air Force training plane crashed into the lake near the west shore near the city, killing the only occupant, the pilot.

Between 1936 and 1953, the International Club in Newport had the largest dance floor in New England, 220 by 60 feet (67 by 18 m). It was capable of holding 2,000 dancers. Various performers stopped to entertain while en route between Boston and Montreal on the railroad. These included: Louis Armstrong, Charlie Barnet, Les Brown, Cab Calloway, Rosemary Clooney, the Dorsey Brothers, Jimmy and Tommy; Stan Kenton, Kay Kyser, Gene Krupa, Glenn Miller, Tony Pastor, and Louis Prima.

From its founding, Newport's population plateaued around 5,000 people until 1950 when it started dropping. It reached bottom in 1990 at 4,434. In 2010 the population dropped from the 2000 census, and it still had not reached its 1950 high which was 5,217. In 2003, the Newport-headquartered Citizens Utility was sold and divided up among Great Bay Hydro and Vermont Electric Cooperative.

The city sold its airport to the state of Vermont in the 1970s.

The Vermont Teddy Bear Company once had a plant within the city. A Columbia Forest Products plant once employed about 100 workers.

A local subsidiary of an international ski clothing manufacturer once employed 30 workers. It closed in 2011.

Newport borders the towns of Coventry to the south, Newport to the west, and Derby to the north and east.

There were 2,086 households out of which 26.6% had children under the age of 18 living with them, 41.0% were married couples living together, 12.6% had a female householder with no husband present, and 42.9% were non-families. 35.5% of all households were made up of individuals and 16.0% had someone living alone who was 65 years of age or older. The average household size was 2.20 and the average family size was 2.84.

All content from Kiddle encyclopedia articles (including the article images and facts) can be freely used under Attribution-ShareAlike license, unless stated otherwise. Cite this article:
Newport (city), Vermont Facts for Kids. Kiddle Encyclopedia.