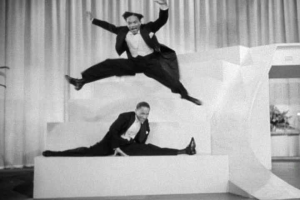 The Nicholas Brothers in Stormy Weather (1943)

The Nicholas Brothers were a duo of dancing brothers, Fayard (1914–2006) and Harold (1921–2000), who excelled in a variety of techniques, including a highly acrobatic technique known as "flash dancing". With a high level of artistry and daring innovations, they were considered by many to be the greatest tap dancers of their day. Their performance in the musical number "Jumpin' Jive" (with Cab Calloway and his orchestra) featured in the 1943 movie Stormy Weather has been praised as one of the most virtuosic film dance routines of all time.

Growing up surrounded by vaudeville acts as children, they became stars of the jazz circuit during the Harlem Renaissance and performing on stage, film, and television well into the 1990s.

The Nicholas Brothers grew up in Philadelphia, the sons of college-educated musicians who played in their own band at the Standard Theater—their mother at the piano and father on drums. At the age of three, Fayard would always sit in the front row while his parents worked, and by the time he was ten, he had seen most of the great African-American vaudeville acts—particularly the dancers, including such notables of the time as Alice Whitman, Willie Bryant, and Bill Robinson. The brothers were fascinated by the combination of tap dancing and acrobatics. Fayard often imitated their acrobatics and clowning for the kids in his neighborhood.

Neither Fayard nor Harold had any formal dance training. Fayard taught himself how to dance, sing, and perform by watching and imitating the professional entertainers on stage. He then taught his younger siblings, first performing with his sister Dorothy as the Nicholas Kids, later joined by Harold. Harold idolized his older brother and learned by copying his moves and distinct style. Dorothy later opted out of the act, and the Nicholas Kids became known as the Nicholas Brothers.

As word spread of their talents, the Nicholas Brothers became known around Philadelphia. They were first hired for a radio program, The Horn and Hardart Kiddie Hour, and then by other local theatres such as the Standard and the Pearl. When they were performing at the Pearl, the manager of The Lafayette, a New York vaudeville showcase, saw them and immediately wanted them to perform for his theater.

The brothers moved to Philadelphia in 1926 and gave their first performance at the Standard a few years later. In 1932 they became the featured act at Harlem's Cotton Club, when Harold was 11 and Fayard was 18. They astonished their mainly white audiences dancing to the jazz tempos of "Bugle Call Rag" and they were the only entertainers in the African American cast allowed to mingle with white patrons. They performed at the Cotton Club for two years, working with the orchestras of Lucky Millinder, Cab Calloway, Duke Ellington, and Jimmy Lunceford. During this time, they filmed their first movie short, Pie Pie Blackbird, in 1932, with Eubie Blake and his orchestra.

In their hybrid of tap dance, ballet, and acrobatics—sometimes called acrobatic dancing or "flash dancing"—no individual or group surpassed the effect that the Nicholas Brothers had on audiences and on other dancers. The brothers attributed their success to this unique style of dancing, which was greatly in demand during this time.

Producer Samuel Goldwyn saw them at the Cotton Club and, impressed by their entertaining performance, invited them to California to be a part of Kid Millions (1934), which was their first role in a Hollywood movie. The brothers made their Broadway debut in the Ziegfeld Follies of 1936 and also appeared in Richard Rodgers and Lorenz Hart's musical Babes in Arms in 1937. They impressed their choreographer, George Balanchine, who invited them to appear in Babes in Arms. With Balanchine's training, they learned many new stunts. Their talent led many to presume they were trained ballet dancers.

By 1940, they had moved to Hollywood and for several decades divided their time between movies, nightclubs, concerts, Broadway, television, and extensive tours of Latin America, Africa, and Europe.

They toured England with a production of Blackbirds, which gave the Nicholas Brothers an opportunity to see and appreciate several of the great European ballet companies.

In 1991, the Nicholas Brothers received Kennedy Center Honors to recognize their achievements spanning 60 years. A year later, a documentary film We Sing & We Dance celebrated their careers and included tributes from Mikhail Baryshnikov, Gregory Hines, M.C. Hammer, and Clarke Peters. In 1994, members of the cast of Hot Shoe Shuffle also paid tribute to the Nicholas Brothers.

One of their signature moves was to leapfrog down a long, broad flight of stairs, while completing each step with a split. Its best remembered performance is in the finale of the movie Stormy Weather (1943). In that routine, the Nicholas Brothers leapt exuberantly across the orchestra's music stands and danced on the top of a grand piano in a call and response act with the pianist, to the tune of "Jumpin' Jive". Fred Astaire once told the brothers that this dance number was the greatest movie musical sequence he had ever seen. Numerous articles have been written about this whole dance being filmed in one take and unrehearsed. As unbelievable as that sounds, the Nicholas Brothers confirmed it in an interview shortly before their recognition at the 14th Annual Kennedy Center Honors. The choreographer, Nick Castle, said, "Just do it. Don`t rehearse it, just do it." And so it was done, unrehearsed and in one take, which relieved Harold Nicholas because he didn't want to do the rigorous routine over and over all night.

In another signature move, they would rise from a split without using their hands. Gregory Hines declared that if their biography were ever filmed, their dance numbers would have to be computer-generated because no one now could emulate them. Ballet legend Mikhail Baryshnikov once called them the most amazing dancers he had ever seen in his life.

Fayard married three times. His marriage to Geraldine Pate lasted from 1942 until their divorce in 1955. He married Barbara January in 1967, the same year he converted to the Baháʼí Faith, and they remained together until her death in 1998. He married Katherine Hopkins in 2000.

He died on January 24, 2006, of pneumonia contracted after sustaining a stroke. His memorial service, presided over by Mary Jean Valente of A Ceremony of the Heart, was standing-room only and featured personal tributes, music, dance, and one last standing ovation.

Two of Fayard's granddaughters dance as the "Nicholas Sisters" and have won awards for their performances.

Harold was married three times. From 1942 to 1951, he was married to singer and actress Dorothy Dandridge, with whom he had one child, Harolyn Nicholas, who was born with a severe intellectual disability In Paris, he had a son, Melih Nicholas, with his second wife. He lived on New York's Upper West Side for twenty years with his third wife, producer and former Miss Sweden, Rigmor Alfredsson Newman. Harold died July 3, 2000, of a heart attack following minor surgery.

According to a Los Angeles Times article on the brothers, "Because of racial prejudice, they appeared as guest artists, isolated from the plot, in many of their films. This was a strategy that allowed their scenes to be easily deleted for screening in the South".

All content from Kiddle encyclopedia articles (including the article images and facts) can be freely used under Attribution-ShareAlike license, unless stated otherwise. Cite this article:
Nicholas Brothers Facts for Kids. Kiddle Encyclopedia.