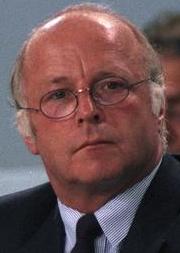 Blüm was born in Rüsselsheim am Main, then Nazi Germany. Due to a sepsis he was paralyzed in arms and legs since 2019. He died on 23 April 2020 in Bonn, Germany at the age of 84.

All content from Kiddle encyclopedia articles (including the article images and facts) can be freely used under Attribution-ShareAlike license, unless stated otherwise. Cite this article:
Norbert Blüm Facts for Kids. Kiddle Encyclopedia.