Northeast is a defined community in the U.S. city of Minneapolis, Minnesota, composed of 13 smaller neighborhoods whose street addresses end in "NE". Unofficially it also includes the neighborhoods of the University community which have "NE" addresses, and the entirety of the Old Saint Anthony business district, which sits on the dividing line of "NE" and "SE" addresses. In the wider community, this business district, which is the oldest settlement in the city, is often identified as the heart of Northeast, in part because it lies across the Mississippi River from Downtown Minneapolis. Northeast is sometimes referred to as "Nordeast", reflecting the history of northern and eastern European immigrants and their language influence. 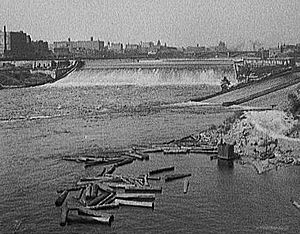 In 1848, Franklin Steele purchased the land that would become St. Anthony and with the help of Ard Godfrey built the first commercial mill at Saint Anthony Falls on the east bank. This place marked the original northernmost navigable point of the Mississippi River. The falls provided a dependable power source and soon many mills had been constructed there and the nickname "Mill City" was born. The land west of the Mississippi was opened for settlement in 1852, and when people started settling it, St. Anthony found it had a competitor across the river. St Anthony was incorporated in 1855, 12 years before its neighbor Minneapolis. St Anthony and Minneapolis existed as separate cities until 1872 when they agreed to merge under the name of Minneapolis. The former St. Anthony became Northeast Minneapolis and a township north of the city incorporated the name St. Anthony.

Northeast has undergone several reinvestment periods of infrastructure. In the 1970s, as the area approached nearly a hundred years of settlement earlier than the rest of the city, the Neighborhood Revitalization Program assisted residents and businesses to utilize grants and loans to complete construction, alteration or improvement projects and the city invested in new streets and urban landscaping. The next few decades carried massive condo development which echoed the rising architecture in downtown Minneapolis. 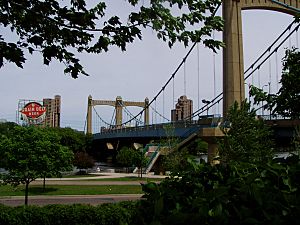 The gateway to Northeast: the Hennepin Avenue Bridge and the landmark Grain Belt beer sign.

The area also has a history of historic preservation. In the 1960s, a proposal to build a freeway through the area was fought. The proposed freeway, Interstate 335, would connect I-94 in north Minneapolis to I-35W north of the University of Minnesota. Land was bought and cleared with residents relocating before the project was finally defeated by local residents and activists. Ultimately new housing and industrial buildings were built on the cleared land. Soon after, a historic preservation district was enacted on the site of the Pillsbury A Mill, stretching east to nearby Marcy Holmes.

The community is bounded by the city limits of Minneapolis on the north and east, by the Mississippi River on the west, and irregularly by a combination of streets and rail lines on the south (in the southeast, it is bounded by the Northeast Industrial Park, which is not a part of any community). It does not include the Old Saint Anthony business district, which is entirely located within the University community. These official borders are established policy by the city. Both City Council Ward boundaries and the Neighborhood Revitalization Program follow these borders.

The name "Northeast" originally came from the city’s street-naming system. Streets suffixed “North,” “South,” “East,” and “West” are all located west of the Mississippi River, while streets east of the river are suffixed “Northeast” and “Southeast.” The dividing line between these two suffixes is East Hennepin Avenue. Again, Northeast under this scheme does not include all of the Old Saint Anthony business district, as much of that (including landmarks such as Nye’s Polonaise Room) are on the “Southeast” side of that street. The Northeast Minneapolis Chamber of Commerce only identifies with the northeast streets.

A spot at 974 feet (297 m) in or near Waite Park in Northeast Minneapolis is corroborated by Google Earth as the highest ground in all of Minneapolis.

Northeast Minneapolis has been a traditionally working class area populated by immigrants of Lebanese, Polish, Finnish, German, Slovak, Russian, and Ukrainian descent who were drawn into the area first by employment opportunities that the grain mills and sawmills along the river offered, and later by rail and factory jobs across the city. By 1930, immigrants made up nearly 60% of Northeast's total population. The Eastern European immigrants, particularly the Poles with whom Northeast is most often associated, had a profound influence on the cultural life of Minneapolis.

The Polish presence in "Nordeast" remains strong, including the names of local businesses that still bear the mark of the area's Eastern European population such as Kramarczuk's Deli, Siwek Lumber and Surdyk's Liquors. The Adam Mickiewicz Polish Saturday School holds classes during the school year at Holy Cross Church. Also, the Polish American Cultural Institute of Minnesota has its library and headquarters on Central Avenue. After some years of absence, the famous Twin Cities Polish Festival returned to the area the weekend of August 15–16, 2009.

In recent years, the demographics of Northeast have changed, the population becoming younger and more diverse, while retaining a stable base of old "Nordeast" families, often in their third or fourth generation. Students attending the nearby University of Minnesota frequently rent and many have settled. African Americans have migrated from the north side to Northeast's more stable neighborhoods and affordable housing opportunities. New immigrant groups (Somalis and Latin Americans) of a variety of nationalities have continued the tradition of Northeast as a haven for immigrants. Seventy-nine percent of housing in the area is owner occupied which has continued to contribute to the stability of neighborhoods.

In the past decades, Northeast has developed an artist community. Galleries and studios now occupy many historic industrial buildings including the The Northrup King Building. The structure started in 1917 for the Northrup-King & Co. seed company and finally comprised 10 interconnected buildings that shipped seeds across the United States. Now, it is the home of over 135 tenants, including 100 artists and including small business and nonprofit organizations. Other buildings with large numbers of art and design related tenants include the Grain Belt Brewery complex, the California Building, Thorp Building, the 2010 Artblok, and the Casket Arts Building.

Another notable arts building is on Quincy Street, the Q'arma Building, which houses Altered Esthetics, an art gallery that works to sustain the historical role of artists as a true voice of society through exhibits and special programs. The gallery hosts new art shows each month with themes as varied as Day of the Dead, Video Game Art, and The Art of Service. Local and international artists alike compete for space in the juried and non-juried artistic shows.

The recent arts influence is expressed by "Art-A-Whirl", an art crawl the third week of May that has existed for 18 years, encompassing 400 art studios. The Northeast Minneapolis Arts Association (or NEMAA), which runs Art-A-Whirl, was instrumental in establishing the Northeast Minneapolis Arts District, bounded by Central Avenue, Broadway, the Mississippi River and 26th Avenue. This geographic area was officially recognized as the Arts District by declaration of the City of Minneapolis in 2003.

In performing arts, the Ritz Theater, on 13th Avenue Northeast, is home to Ballet of the Dolls and many other arts organizations and community events. The historic venue, renovated in 2006, has brought life to the 13th Avenue Business District and seen the addition of many shops and restaurants since its renovation. 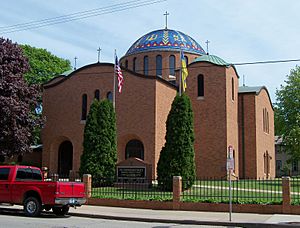 Northeast Minneapolis also became known for its large number of churches, including Minneapolis' first church, Our Lady of Lourdes Church built on land donated by Pierre Bottineau and founded in 1849 as the First Universalist Society. Four of Minneapolis' five historical Polish churches are in Northeast: Holy Cross, All Saints, St. Hedwig, and Sacred Heart of Jesus Polish National Catholic Church. Holy Cross has a thriving Polish ministry staffed by the Society of Christ and continues to have Mass in Polish. A significant number of Polish Americans also belong to St. Anthony of Padua, as well as those of Irish descent. The Italian community is associated with Our Lady of Mount Carmel and St. Clement. The Slovak community and a growing Latino community are associated with Ss. Cyril & Methodius. Other ethnic Catholic churches include St. Maron (Lebanese), St. John's Byzantine Rite (Rusyn), St. Constantine's (Ukrainian), and St. Boniface (German).

In mid October 2010, the Archdiocese of Saint Paul and Minneapolis announced a Strategic Plan which would merge Holy Cross, St. Hedwig and St. Clement into St. Anthony of Padua. This decision has met with significant opposition, with a number of appeals being sent to Archbishop John C. Nienstedt. One appeal, organized by the Polish Committee at Holy Cross, was signed by over 400 people. As a result, Archbishop Nienstedt issued a new decree on November 15, 2010, which extended the deadline for the merger to be enacted until July 2013, emphasized that Mass in Polish will continue in the merged parish, and ordered that after the merger that St. Anthony change its name to Holy Cross. Parishioners from St. Hedwig and Holy Cross appealed this second decree, requesting that their parishes be left out of the merger. Approximately 800 people signed this second appeal. In a December 27, 2010, letter, Archbishop Nienstedt rejected this appeal. As a result, Holy Cross parishioners organized an appeal to the Vatican's Congregation for Clergy. Over 1,000 people signed this appeal. In January 2011, the Congregation accepted the appeal for consideration. In late July, the Congregation found that Archbishop Nienstedt's decree did not violate canon law. This decision was appealed to the Apostolic Signature, which upheld the Congregation's ruling in mid-2012. Formal appeals exhausted, the parishes are set to merge on July 1, 2013. Some continue to appeal to Archbishop Nienstedt to remove Holy Cross and St. Hedwig's from the merger. To date, he has declined to do so and suggested that such appeals are based more on nationalism than on concern for the Catholic faith.

The Polish-American media, notably the Polish American Journal and Kurier Polski of Minnesota, have covered the opposition to the Holy Cross merger extensively. Minnesota media also reported on an August 6, 2011, public rally against the merger of parishes in front of the St. Paul Cathedral. Approximately 75 people participated in the rally, most were Holy Cross supporters, while some were from St. Austin Parish in North Minneapolis (which is set to be absorbed by St. Bridget Parish on January 1, 2012). This rally was the largest public expression of opposition to the Archdiocese's Strategic Plan. The Northeaster newspaper printed an editorial critical of the Holy Cross merger on August 10, 2011. Leaflets against the merger have been distributed in Northeast on at least three occasions.

Northeast was also the site of significant developments in the history of the Orthodox Church in the United States. It was here that St. Alexis Toth founded the first Orthodox seminary in the United States at St. Mary's Orthodox Cathedral. St. Alexis had been an Eastern Rite (Ruthenian) Catholic priest, who after a confrontation with the Roman Catholic Archbishop of St. Paul, John Ireland, converted to the Russian Orthodox Church. St. Alexis is responsible for the conversion of approximately 20,000 Eastern Rite Catholics to Orthodoxy. The Orthodox Church in America canonized St. Alexis in 1994. To date, the Vatican has made no similar move in Bishop Ireland's case. Presently, there are two Orthodox churches in Northeast: St. Mary's Orthodox Cathedral (associated with St. Alexis) and St. Michael and St. George Ukrainian Orthodox Church.

All content from Kiddle encyclopedia articles (including the article images and facts) can be freely used under Attribution-ShareAlike license, unless stated otherwise. Cite this article:
Northeast, Minneapolis Facts for Kids. Kiddle Encyclopedia.