Osman I facts for kids

Osman I or Othman I or Osman Gazi (1258 – 1326) Sultan Osman Ghazi, or Osman Bey or I. Osman, Osman Gazi Han, nicknamed "Kara" (black in Turkish-for his bravery), was the leader of the Ottoman Turks, and the founder of the dynasty that established and ruled the Ottoman State. The State, named after him, would prevail as a world empire for almost six centuries. It existed until 1 November 1922, after being in serious decline since the early 18th century.

Osman announced the independence of his own small kingdom from the Seljuk Turks in 1299, and was acclaimed the Khan of the Kayihan tribe. The westward drive of the Mongol invasions had pushed scores of Muslims toward Osman's Anatolian principality, a power base that Osman was quick to consolidate. As the Byzantine Empire declined, the Ottoman Empire rose to take its place.

Ertuğrul, Osman I's father, led the Turkic Kayi tribe west into Anatolia, from Central Asia fleeing the Mongol onslaught. His mother was named Khaima. He pledged allegiance to Sultan Kayqubad I of the Seljuk principality of Rum, who gave him permission to establish a beylik and expand it if he could, at the expense of the neighboring Byzantine provinces. 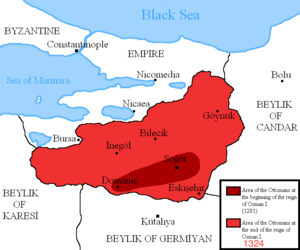 Area of the Ottoman Empire during the reign of Osman I

This location was auspicious, as the wealthy Byzantine Empire was weakening to his West, while in the east, Muslim forces under the Seljuk Turks were splintered and distracted in the face of relentless Mongol aggression and internal bickering. Baghdad had been sacked by Hulagu Khan in 1258, the very year Osman I was born. In 1231, Ertuğrul conquered the Nicean (Byzantine) town of Thebasion, which was renamed to Söğüt and became the initial capital of his territory.

Osman became chief, or Bey, upon his father’s death in 1281. By this time, mercenaries were streaming into his realm from all over the Islamic world to fight against and hopefully plunder the weakening Orthodox empire. In addition, the Turkic population of Osman's emirate were constantly reinforced by a flood of refugees, fleeing from the Mongols. Of these, many were Ghazi warriors, or fighters for Islam, border fighters who believed they were fighting for the expansion or defense of Islam. Under the strong and able leadership of Osman, these warriors quickly proved a formidable force, and the foundations of the Empire were quickly laid.

23 years of age at his accession, Osman had already proven his skill as a leader and warrior. His early fortunes and exploits are favorite subjects of Ottoman writers, especially in love stories of his wooing and winning the fair Mal Hatun. These legends have been romanticized by the poetical pens which recorded them in later years. The Ottoman writers attached great importance to this legendary, dreamlike conception of the founder of their empire.

Ottoman historians often dwell on the prophetic significance of his name, which means "bone-breaker", signifying the powerful energy with which he and his followers appeared to show in the following centuries of conquest. The name Osman is the Turkish variation of the Muslim name Othman, or Uthman.

After the last prince of the family of Alaeddin, to whom Osman's empire was indebted for its foundation in Asia Minor, died, there was no one to compete with Osman for the headship of the Turks of the region and dominion over the whole peninsula, save the Emir of Karamanids. A long and fierce struggle between the descendants of Osman and Karamanogullari princes for ascendancy commenced in Osman’s lifetime, extending through the reigns of many of his successors. Osman himself had gained some advantages over his Karamanli rival; but the weak and wealthy possessions of the Byzantine Emperor in northwest Asia Minor were more tempting marks for his ambition than the Karamanoglu plains, and it was over the cities and armies of the ailing Byzantine Empire that the triumphs of the last 26 years of Osman’s life were achieved.

Osman I left his mark on the history of the region. He is remembered as the founder of a powerful empire and one of the symbols of the Ghazi tradition. A considerable portion of the Turkish people called themselves Osmanlı (Ottoman) until the dissolution of the Ottoman Empire.

Osman Gazi appreciated the opinions of the famous Ahi Sheikh, Sheik Edebali, and he respected him. Osman often visited Edebali in his home at Eskisehir where a dervish group met.

One night, when Osman was a guest in Edebali’s dergah, he had a dream. As the sun rose, he went to Edebali and told him, “My Sheik, I saw you in my dream. A moon appeared in your breast. It rose, rose and then descended into my breast. From my navel there sprang a tree. It grew and branched out so much, that the shadow of its branches covered the whole world. What does my dream mean?”

After a brief silence, Edebali interpreted:

“Congratulations Osman! God Almighty bestowed sovereignty upon you and your generation. My daughter will be your wife, and the whole world will be under the protection of your children.” 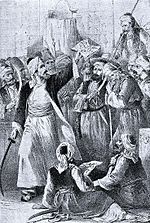 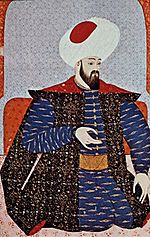 Manuscript of Osman I

In 1302, after soundly defeating a Byzantine force near Nicaea, Osman began settling his forces closer to Byzantine controlled areas. Large numbers of Ghazi warriors, Islamic scholars and dervishes began settling in Osman-controlled areas, and migrants composed the bulk of his army. The influx of Ghazi warriors and adventurers of differing backgrounds into these lands spurred subsequent Ottoman rulers to title themselves "Sultan of Ghazis".

Alarmed by Osman's growing influence, the Byzantines gradually fled the Anatolian countryside and dedicated their resources to the Navy instead. Byzantine leadership was determined to prevent Osman from crossing into Europe and attempted to contain Ottoman expansion westward. Osman however continued to press westward and captured the Byzantine city of Ephesus near the Aegean Sea. Further strengthened by the influx of migrants into his territory, Osman also moved eastward and seized Byzantine domains in the Black Sea region of Anatolia.

In directing his son to continue the administrative policies set forth by Sheik Edebali, Osman stated:

Son! Be careful about the religious issues before all other duties. The religious precepts build a strong state. Do not give religious duties to careless, faithless and sinful men or to dissipated, indifferent or inexperienced people. And also do not leave the state administrations to such people. Because the one with fear of God the Creator, has no fear of the created. One who commits a great sin and continues to sin can not be loyal. Scholars, virtuous men, artists and literary men are the power of the state structure. Treat them with kindness and honour. Build close relationship when you hear about a virtuous man and give wealth and grant him...Put order the political and religious duties. Take lesson from me so I came to these places as a weak leader and I reached to the help of God although I did not deserve. You follow my way and protect Din-i-Muhammadi and the believers and also your followers. Respect the right of God and His servants. Do not hesitate to advise your successors in this way. Depend on God's help in the esteem of justice and fairness, to remove the cruelty, attempts in every duty. Protect your public from enemy's invasion and from the cruelty. Do not behave any person in an unsuitable way with unfairness. Gratify the public and save all of their sake.

The Sword of Osman

The Sword of Osman (Turkish: Taklide-Seif) was an important sword of state used during the coronation ceremony of the sultans of the Ottoman Empire. The practice started when Osman was girt with the sword of Islam by his mentor and father-in-law Sheik Edebali. The girding of the sword of Osman was a vital ceremony which took place within two weeks of a sultan's accession to the throne. It was held at the tomb complex at Eyüp, on the Golden Horn waterway in the capital Constantinople. The fact that the emblem by which a sultan was enthroned consisted of a sword was highly symbolic: it showed that the office with which he was invested was first and foremost that of a warrior. The Sword of Osman was girded on to the new sultan by the Sharif of Konya, a Mevlevi dervish, who was summoned to Constantinople for that purpose. Such a privilege was reserved to devout religious leaders from the time Osman had established his residence in Konya in 1299, before the capital was moved to Bursa and later to Constantinople. 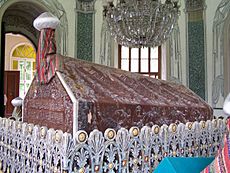 Osman is portrayed by Oğuz Oktay in 2012 film Fetih 1453. Osman appears in Mehmed II's (Devrim Evin) dream and tells him that Mehmed is the commander prophesied by Muhammad as Constantinople's conqueror.

All content from Kiddle encyclopedia articles (including the article images and facts) can be freely used under Attribution-ShareAlike license, unless stated otherwise. Cite this article:
Osman I Facts for Kids. Kiddle Encyclopedia.