Panola County is a county located in the U.S. state of Mississippi. As of the 2010 census, the population was 34,707. Its county seats are Sardis and Batesville. Panola is a Cherokee word which means cotton. The county is located just east of the Mississippi Delta and bisected by the Tallahatchie River flowing to the southwest, separating the two county seats.

Panola County was established February 9, 1836, and is one of the twelve large northern Mississippi counties created that year from the territory of the Chickasaw Cession of 1832. The original act defined its limits as follows:

On February 1, 1877, when Quitman County was organized by the legislature, it took a small fraction of Panola's southwestern area, reducing Panola from an area of 756 square miles (1,960 km2) to its present land surface of 705 square miles (1,830 km2). The county had a population of 27,845, in 1920. Its inhabitants gradually increased in numbers from 1850 to 1910, from 11,444 to 31,274, reaching a peak of population in 1940. From then until 1980, population declined markedly, as many African Americans moved west and north in the second wave of the Great Migration, to take jobs on the West Coast in the burgeoning defense industry.

Two of the oldest settlements in the county were at Belmont and Panola, a few miles apart and located on opposite sides of the Tallahatchie River. For several years there was a spirited contest between these two towns to gain the county court of Panola County. With the advent of the Mississippi and Tennessee (now the Illinois Central railroad), Belmont was absorbed by Sardis, and Panola was absorbed by Batesville. The legislature authorized two judicial districts for the county, with Sardis designated as the seat of justice for the first judicial district, and Batesville for the second judicial district.

During the early period of county formation, most education was done at home; there was no public education, and only wealthier families hired tutors or sent their sons to seminaries or academies. The informal education consisted of basic math, basic reading and study of biblical concepts. Through the antebellum period, the state generally forbade education of slaves and free people of color.

By 1840 four small private schools with a combined student population of 92 pupils were operating in the county. Documentation has not survived about these schools. During the early 1840s the first school‑related advertisements began to appear in the county newspapers. The ads attempted to present the virtues of these early schools.

During this period, Judge James S.B. Thacher, a highly educated Bostonian, devised a popular educational program for the state of Mississippi. The proposed scheme received considerable discussion and was finally incorporated by the state legislature (4 March 1846) into "An Act to establish a System of Common Schools." The act "provided for a board of five school commissioners in each county, to license teachers and have charge of schools, lease the school lands and have charge of the school funds in each county." To a large degree, this act was established because A.G. Brown, a candidate for Mississippi governor, decided to make the establishment of a general school system a campaign issue. By 1846, Governor Brown (1844‑48), succeeded in getting the Act passed. Schools established under this rule "had no uniformity since they differed as the counties differed in wealth and efficiency of management." Starting in 1803, sixteenth sections in each township in Mississippi were established for school purposes. These sections of land were to be used exclusively for school projects.

Although the Act had proved to be of little assistance in Panola County, progress was still being made for wealthier white students. By 1850, the seventh census in Panola County listed 18 schools and a total student population of 439 pupils (approximately four times that of the 1840 census). This census (unpublished returns) also revealed that 18 individuals stated their occupation as educators or teachers. By the spring of 1854, several members of the local Shiloh community (Capt Thomas F. Wilson, Dr H. Moseley, and Mr Jesse Smith) constructed a small log cabin to be used as the community's school house. This school, known as the Jones' School, at first employed only one teacher but slowly grew in size and popularity. Several years later, the location of the teaching facility was moved to Peach Creek, where the school was informally known as the "Greasy Smith Schoolhouse," being named for the local village blacksmith. 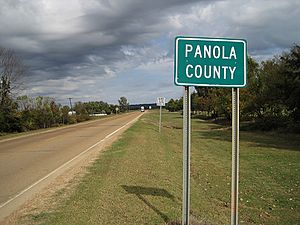 All content from Kiddle encyclopedia articles (including the article images and facts) can be freely used under Attribution-ShareAlike license, unless stated otherwise. Cite this article:
Panola County, Mississippi Facts for Kids. Kiddle Encyclopedia.