Papatoetoe is a suburb in the Auckland conurbation in northern New Zealand. One of the larger suburbs of the area commonly known as South Auckland, it is located to the northwest of central Manukau, and 18 kilometres southeast of Auckland city centre.

Papatoetoe is a Māori name, which can be loosely translated as 'undulating area where the toetoe is the predominant feature', making it named after the 'Prince of Wales' feather (or toetoe / toi toi), which grew abundantly in the swampy parts of the region. Due to some confusion over the spelling, the area was known as Papatoitoi for many years.

People have lived in the Papatoetoe area for almost the entire time of human settlement in New Zealand. For both the original Māori and the first English settlers, the Papatoetoe area was handily located close to the narrowest points between Auckland's two great harbours, where waka could be ported over land. It was also rich in fertile soil.

Inlets run from Papatoetoe eastward to the Waitemata Harbour and westward to the Manukau Harbour. Thus for travellers past and present the routes south to the Waikato River and the north to the Auckland isthmus - Tamaki-makau-rau (Tamaki coveted by many) - have always been through Papatoetoe.

Manukau City Council has in early 2009 announced plans to spend millions revitalising the town's centre in the St. George Street area. New apartment buildings and nearby sports facilities (centred on a NZ$12 million multisports centre) are to encourage new shops to the area, which has deteriorated in the past, partly due to competition from shopping malls.

Papatoetoe Historical Society was established in 1988 with the aim to gather the historical artifacts and information from the Papatoetoe district. The collection held includes a collation of information on Local Body members, schools as they developed, the origin and meaning of street names, women of the district (book available), people of the surrounding farming district, newspaper cuttings and information on local organisations. The society has also developed an archive collection which includes photographs, books, booklets, plans and posters. These collections can be viewed at the Papatoetoe Historical Society museum which is housed in the old Papatoetoe Council works depot at 91 Cambridge Terrace, Papatoetoe.

In 2012 Papatoetoe celebrated 150 years of civic life. The Papatoetoe 150 was initiated by the Papatoetoe Historical society to increase awareness of history and promote community organisations.

Papatoetoe is home to the Papatoetoe Cricket Club who play in the Auckland Cricket Championship. 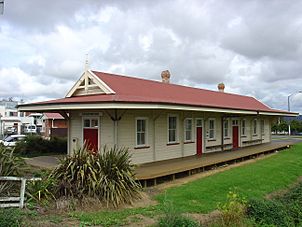 All content from Kiddle encyclopedia articles (including the article images and facts) can be freely used under Attribution-ShareAlike license, unless stated otherwise. Cite this article:
Papatoetoe Facts for Kids. Kiddle Encyclopedia.