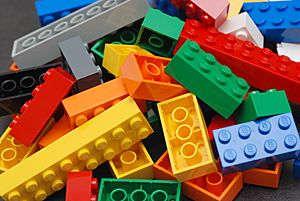 The video montage reveals that Sheeran is fond of Lego (pictured).

"Photograph" served as the fifth and final single from the album. It reached the top five on the main singles charts in more than five countries. In the US, where it peaked at number ten, "Photograph" became the third single from the album to have reached within the top ten. In the UK, it reached number 15 and has since been certified platinum for sales of 600,000 units. The single has also been certified double platinum in Australia and Canada, and platinum in New Zealand.

All content from Kiddle encyclopedia articles (including the article images and facts) can be freely used under Attribution-ShareAlike license, unless stated otherwise. Cite this article:
Photograph (Ed Sheeran song) Facts for Kids. Kiddle Encyclopedia.