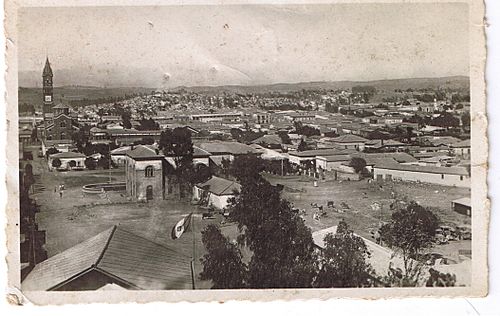 Italian Asmara in 1935, looking like a typical small Italian city

Piccola Roma was the nickname of Asmara (capital of Italian Eritrea), during the decades of Italian colonial rule of Eritrea.

The city of Asmara was founded by the Italians in the last years of the XIX century, from a small native village. Soon was made the capital of their colonial possessions in Eritrea, mainly because of the climate being located at more than 2000 meters of altitude.

In the 1930s the city was being populated by many thousands of Italian colonists and in 1940 it was mostly Italian looking (by architecture and by inhabitants way of life). That it the reason why it was called "Piccola Roma" ("little Rome"), due to the fact that it was a bit similar to the capital of Italy (Roma).

"Piccola Roma" was a typical Italian city created in the middle of eastern Africa, where the majority of the population was southern european in appearance & customs, spoke italian and practised the catholicism when WW2 started. It was going to be the industrial center of the Italian East Africa, but the war blocked this development.

"The city is known for its early 20th century buildings, including the Art Deco "Cinema Impero" (opened in 1937 and considered by the experts one of the world's finest examples of Art Déco style building), the Cubist "Africa Pension", the rationalist "Governor's Palace", the eclectic Eritrean Orthodox "Tewahdo" Church, the former "Asmara Opera House", the futurist architecture "Fiat Tagliero Building", the neo-Romanesque architecture "Roman Catholic Cathedral", and the neoclassical architecture "President's Palace". The city is adorned by Italian colonial villas and mansions, one prominent example being the 'Asmara's World Bank Building'...." 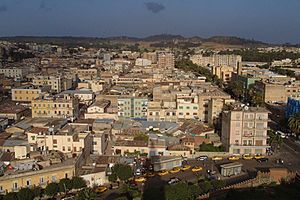 Most of central Asmara was built between 1935 and 1941, so effectively the Italians managed to build almost an entire city in just six short years.

Actually (in July 2017) Asmara has been declared World Heritage Site by the UNESCO, mainly because of the architecture created during the Italian colonial years (that lasted from 1881 until 1941).

All content from Kiddle encyclopedia articles (including the article images and facts) can be freely used under Attribution-ShareAlike license, unless stated otherwise. Cite this article:
Piccola Roma Facts for Kids. Kiddle Encyclopedia.