Pieterlen (French: Perles) is a municipality in the Biel/Bienne administrative district in the canton of Bern in Switzerland.

Pieterlen is first mentioned in 1228 as Perla. In 1268 it was mentioned as Bieterlo.

The Vorem Holz 3 archeological site contains the remains of a Bronze Age settlement in the Pieterlen municipality. A first- to third-century Roman estate has also been discovered. During the Middle Ages there were several settlements in the modern municipal borders. A medieval bath house was found at Thürliweg. The early medieval Totenweg cemetery served two different settlements during the 7th-8th centuries. A medieval fortification at Gräuschenhubel has also been discovered. During the Late Middle Ages the village was mentioned as the personal property of the Lords of Pieterlan. By the end of the 13th century, the village passed through the hands of a number of nobles before ending up under the Prince-Bishop of Basel. Under the Prince-Bishops the village was combined with Romont, Reiben (now part of Büren an der Aare and Meinisberg) to form the southern-most ecclesiastical district of the Erguel seigniory. The low court met in Pieterlen while the high court was in Reiben and was held on the bridge over the Aare river. Militarily it was part of the banner of Biel.

In 1797 the region was invaded and annexed by France. It was initially part of the Département of Mont-Terrible, but in 1800 it was transferred to the Département of Haut-Rhin. After the collapse of Napoleonic France in 1815, the village was assigned to the Canton of Bern and in the following year it became part of the newly created Büren District. In 1833 the old parish was divided into four new political municipalities; Pieterlen, Meinisberg, Reiben (joined Büren an der Aare in 1911) and Romont (joined the Courtelary District in 1840). 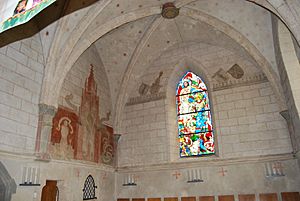 Murals on the wall of the Protestant village Church of St. Martin

The village Church of St. Martin was first mentioned in 1228, though it was built on the site of an earlier, probably 10th century, church. The modern church's nave was built in 1615 and remodeled in 1858. The choir is decorated with medieval murals and the grave plate of the Lords of Eptingen-Wildenstein from the 14th century. The right to appoint the village priest was given to Bellelay Abbey in 1416. Despite the Protestant Reformation and the church becoming Protestant in 1529, the Abbey continued to exercise this right until the secularization of the Abbey in 1797. Today the Reformed parish of Pieterlen includes Meinisberg.

Starting in 1860, a number of small businesses and cottage workshops began manufacturing watch and clock parts. The Olten-Biel railroad built a station in the village in 1857. Around 1900 a watch factory and a brick works opened in the village. By 1904 the watch factory employed 80 workers. The factories, good roads and railroad connections transformed Pieterlen from a farming village, producing grain and wine, into an industrial town. The rapidly growing population required places to live so the workers' settlement of Sonnenhof and the new neighborhoods of Rebenweg, Romontweg, Rain and Löschgatter were built to house them. After the departure of the watch industry in the 1970s and 1980s, the town diversified its industrial base and built the Industrie-West industrial zone. In 2005 nearly half (49%) of the working population work in industry, while 47% work in the services sector. Starting in 2002, a section of the A5 motorway from Solothurn to Biel was built through the municipality.

The Schlössli, a country estate for the Wildermeth family of Biel, was built in 1838. Today it is the retirement home Schlössli. The secondary school opened in the village in 1907. The nature reserve Felsenheide was established outside the town in 1952.

All content from Kiddle encyclopedia articles (including the article images and facts) can be freely used under Attribution-ShareAlike license, unless stated otherwise. Cite this article:
Pieterlen Facts for Kids. Kiddle Encyclopedia.