Pine Flat Dam is a concrete gravity dam on the Kings River in the Central Valley of Fresno County, California United States. Situated about 28 miles (45 km) east of Fresno, the dam is 440 feet (130 m) high and impounds Pine Flat Lake, one of the largest reservoirs in California, in the foothills of the Sierra Nevada just outside the boundary of Kings Canyon National Park. The dam's primary purpose is flood control, with irrigation, hydroelectric power generation and recreation secondary in importance.

The dam was built by the U.S. Army Corps of Engineers (USACE) after a six-year controversy between supporters of irrigation development and proponents of flood control. Construction began in 1947 and was completed in 1954. Since then, the dam has prevented millions of dollars in flood damages and fostered extensive development of agriculture on the fertile floodplain of the Kings River; after 1984 it has also generated hydroelectricity. However, the increased irrigation allowed by the dam has also led to the destruction of some of North America's most extensive wetland habitats.

The first serious proposal to dam the Kings River was made in the 1890s by engineer J.B. Lippincott, who surveyed and envisioned the development of a 185,000-acre-foot (0.228 km3) reservoir on the river. However, it was not until 1914 when the proposed Kings River dam gained strong support from area farmers and water districts, who formed the Kings River Water Association (KRWA) in 1927 to allocate river water for the irrigation of 958,000 acres (388,000 ha) of the San Joaquin Valley on the alluvial plain of the Kings River. In 1937, the KRWA appealed to the federal government to provide financial aid and support the construction of a large dam at Pine Flat.

Starting in 1938, two government agencies – the USACE and the U.S. Bureau of Reclamation (USBR) – fought it out for the construction of Pine Flat Dam. With the support of President Franklin D. Roosevelt, the USBR wanted to incorporate the dam as part of its fledgling Central Valley Project (CVP), which intended to develop the rivers of the Central Valley for irrigation. The USACE objected to the bureau's plans, mainly because the primary purpose of the dam would be flood control. Some area farmers were also against the integration of Pine Flat Dam into the CVP, as under "reclamation law" individual farmers could not receive more water than was necessary for the irrigation of 160 acres (65 ha). All of the water in the Kings River was already appropriated to local irrigators, many of whom owned more land than the USBR limit.

On May 27, 1947, the USACE held the groundbreaking ceremony for Pine Flat Dam, which was attended by more than 2,000 people. Governor Earl Warren set off the first blast at the dam site with the turn of a switch, detonating forty charges of dynamite on the south side of the Kings River gorge. In order to bring construction materials to the site, a temporary railroad was constructed along the Kings River. Concrete was brought to the dam site by a pair of portable concrete mixers on a flatcar, and pumped into place via a 48-foot (15 m) long tunnel also mounted on a train car. In November 1950, floodwaters tore through the construction site, contributing to a serious late-season flood event that caused $20–25 million of damage in the San Joaquin Valley. This was the last major flood event on the Kings River before the completion of Pine Flat Dam, which would have "prevented much damage… had [it] been completed".

In 1951, a cofferdam was constructed to divert the Kings River along the north side of the canyon to allow the construction of the dam's foundations. In July, the river was blocked from this temporary channel and flowed through the dam's bottom sluice gates for the first time, permitting the northern section of the dam to be built in the former diversion channel. Pine Flat Dam's main structure was built in 37 vertical sections of large concrete forms or "monoliths" that were secured by temporary steel scaffolding that was removed after the concrete cured.

By 1953, the dam was high enough to begin impounding the river and flows through the sluice gates were cut, and Pine Flat Lake began to fill. The final cost of Pine Flat Dam was $42.3 million, exceeding the projected cost by more than 25 percent. On May 22, 1954, 3,000 people attended the dedication of Pine Flat Dam. This was far short of the predicted crowd of 15,000. Because of the conflict between local farmers, the USACE and the USBR, "perhaps more citizens would have been present if they had felt that it was really their dam, that they had more to celebrate." 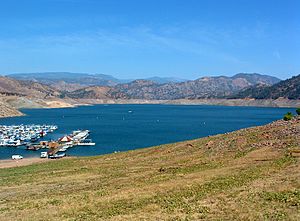 Less than two years after completion, Pine Flat Dam halted "what would have been at the time the greatest Kings River flood ever measured" in late November 1955, when the Kings River reached a peak inflow into the reservoir of 112,000 cu ft/s (3,200 m3/s). In January 1969, the highest releases ever from Pine Flat Dam, 17,100 cu ft/s (480 m3/s), occurred in the wake of a flood that reached a less impressive peak of 80,000 cu ft/s (2,300 m3/s) but had a much greater volume than the 1955 rain flood. The dam's contribution to reducing the impact of floods has allowed greater diversion of Kings River flows for irrigation, and along with other smaller dams in the southern San Joaquin Valley, has contributed to the desiccation of the once-expansive wetlands of Tulare Lake. The lake, which once comprised nearly 500,000 acres (200,000 ha) of seasonal open water and wetlands, was reduced to less than 27,000 acres (11,000 ha) by 1960.

During the 1969 rains local residents clamored for floodwaters from Pine Flat Lake to be diverted to Tulare lakebed. Representation on the irrigation district board, however, was determined by the value of landowners’ land and J. G. Boswell Company owned the majority of land in the district. J. G. Boswell Co. voted to block the floodwater diversion so that its crops on the Buena Vista lakebed would not be destroyed.

Residents whose homes were destroyed by the flood sued. Limiting suffrage to landowners violated the one man, one vote guarantee in the U.S. Constitution, they alleged, because the irrigation district can levy taxes, exercise eminent domain, and decide whose land gets flooded. In 1973 a divided United States Supreme Court disagreed, finding that a private company can exercise control of the irrigation district because flood control is not an important government function.

In the early 1970s, the KRCD (Kings River Conservation District) proposed a system of new dams and power plants to further develop the water resources of the Kings River watershed. These included a new power station at Pine Flat Dam, a massive 600-foot (180 m) dam at Rodgers Crossing upstream of Pine Flat Lake and a reservoir at Piedra to regulate Pine Flat Dam releases. The only part of the project to be completed was the Jeff L. Taylor Pine Flat Power Plant at the base of Pine Flat Dam, which went into operation in 1984.

Following the September 11, 2001 terrorist attacks in New York City, Pine Flat Dam was closed to all public access because of its importance in protecting the region from floods and the damage that the impounded water would do if the dam was breached.

The dam and reservoir serve the primary purpose of flood control, so its flood-control reservation is large at 475,000 acre feet (0.586 km3), nearly half of the reservoir's capacity. The dam provides flood protection to about 300 square miles (780 km2) of land and is operated to maintain a maximum downstream discharge of 4,750 cubic feet per second (135 m3/s) at Crescent Weir, a water diversion structure on the Kings River about 6 miles (9.7 km) northwest of Lemoore. Due to the limited capacity of the reservoir, dam operators are often forced to release flows that exceed this limit in high runoff years, including in 1969, 1978, and 1986. In the 1969 floods, 1,017,000 acre feet (1.254 km3) of water – greater than the entire capacity of Pine Flat Lake – poured over the dam's spillway. An average of 200,000 acre feet (0.25 km3) of water is spilled each year, reducing valuable irrigation water supplies and causing flooding, because Pine Flat Dam is unable to contain it. This has prompted plans to raise the dam, which would increase the storage capacity by up to 124,000 acre feet (0.153 km3), all of which would be added to the flood-control pool. Increasing the height of the dam would also allow for development of more water resources for irrigation and greater power generation.

The dam is also operated to maintain base flows in the Kings River during low water summers for wildlife conservation purposes. On September 11, 1964, the California Department of Fish and Game and the KRWA signed an agreement that established a minimum release of 50 to 100 cubic feet per second (1.4 to 2.8 m3/s), which can be reduced to 25 cubic feet per second (0.71 m3/s) if inflows from downstream tributaries exceed that amount.

All content from Kiddle encyclopedia articles (including the article images and facts) can be freely used under Attribution-ShareAlike license, unless stated otherwise. Cite this article:
Pine Flat Dam Facts for Kids. Kiddle Encyclopedia.