The Dick's Sporting Goods Pittsburgh Marathon, commonly referred to as the Pittsburgh Marathon, is an annual marathon footrace held on the first Sunday in May in Pittsburgh, Pennsylvania in the United States. The Marathon was first announced on October 3, 1984 with U.S. Steel and PNC Bank as sponsors. From 1985 to 2003, the race was held annually and named the UPMC/City of Pittsburgh Marathon, although serious financial difficulty within the City of Pittsburgh municipal budget and UPMC's withdraw from title sponsor led to suspension of the race from 2004 to 2008. In 2009, the event was revived with a new title sponsor, Dick's Sporting Goods, and renewed interest in the race.

The 1988 and 2000 races were USA Olympic Trials for women and men, that were held separately from the regular event although both were held over the same course.

The 2020 and 2021 editions of the race was cancelled due to the coronavirus pandemic, with all registrants having the option to either run the race virtually or obtain a refund. 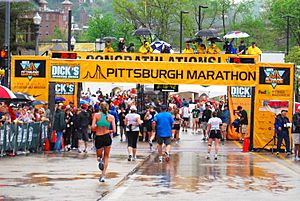 Finish line of the Pittsburgh Marathon in 2010.

Aside from the main marathon event, several races occur during the weekend of the marathon, including a half marathon, two to five person marathon relay, 5k race, and "kids marathon." All races except for the "kids marathon" and 5k utilize the same route and starting time as the marathon. Attendance and popularity of the events has risen greatly since the 2009 revival. The 2012 race had the largest field in the history of the race. Registration for 2012 closed with roughly 25,000 participants between all races, with 6,000 entrants in the full marathon, 13,000 entrants in the half marathon, and 800 teams in the marathon relay, with the remaining entrants distributed in the 5K. Additionally, an estimated 60,000 spectators lined the course, and 4,000 volunteers provided assistance. 2012 also marked the earliest sellout in the race's history with all events except the 5k selling out on or before March 6, 2012. 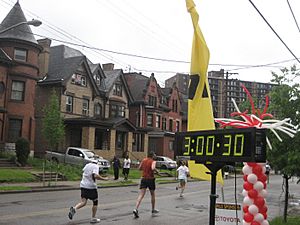 Historically, the course has wound through the unique and hilly topography of the city. Crossing five different bridges, the course traverses all three rivers of Pittsburgh's at least once. The start and finish lines have changed many times, but have always been in either Downtown or North Shore. Previous finish lines have included Point State Park, David L. Lawrence Convention Center, and the 50 yard-line of Heinz Field. The current finish line is on the Boulevard of the Allies near Point State Park. Numerous other historic and well-known Pittsburgh neighborhoods are along the route, including the South Side, Oakland, Shadyside, East Liberty, Highland Park, Bloomfield, Lawrenceville, and the Strip District. 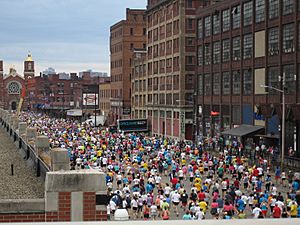 All content from Kiddle encyclopedia articles (including the article images and facts) can be freely used under Attribution-ShareAlike license, unless stated otherwise. Cite this article:
Pittsburgh Marathon Facts for Kids. Kiddle Encyclopedia.