Portulaca oleracea (common purslane, also known as duckweed, little hogweed, or pursley) is an annual succulent in the family Portulacaceae, which may reach 40 cm (16 in) in height. Approximately forty cultivars are currently grown.

Its specific epithet oleracea means "vegetable/herbal" in Latin and is a form of holeraceus (oleraceus).

There are likely thousands of names for the purslane plant in various languages from the many human cultures that ate this plant as a nutritious herb throughout human history on the planet.

Purslane has an extensive distribution, assumed to be mostly anthropogenic, extending from North Africa and Southern Europe through the Middle East and the Indian subcontinent to Malesia and Australasia. The species status in the Americas is uncertain. In general, it is often considered an exotic weed, but there is evidence that the species was in Crawford Lake deposits (Ontario) in 1350–1539, suggesting that it reached North America in the pre-Columbian era. Scientists suggested that the plant was already eaten by native Americans, who spread its seeds. How it reached the Americas is currently unknown. 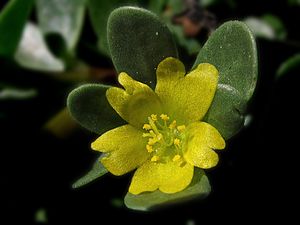 Purslane has smooth, reddish, mostly prostrate stems and the leaves, which may be alternate or opposite, are clustered at stem joints and ends. The yellow flowers have five regular parts and are up to 6 mm (0.24 in) wide. Depending upon rainfall, the flowers appear at any time during the year. The flowers open singly at the center of the leaf cluster for only a few hours on sunny mornings. The tiny seeds are formed in a pod, which opens when the seeds are mature. Purslane has a taproot with fibrous secondary roots and is able to tolerate poor compacted soils and drought.

P. oleracea is one of very few plants able to utilize both CAM and C4 photosynthesis pathways, for a long time believed to be incompatible with each other despite biochemical similarities. P. oleracea will switch from C4 to CAM pathways during times of drought and there is transcription regulation and physiological evidence for C4-CAM hybrid photosynthesis during mild drought.

Purslane is widely used in East Mediterranean countries. Archaeobotanical finds are common at many prehistoric sites. In historic contexts, seeds have been retrieved from a protogeometric layer in Kastanas, as well as from the Samian Heraion dating to seventh century BC. In the fourth century BC, Theophrastus names purslane, andrákhne (ἀνδράχνη), as one of the several summer pot herbs that must be sown in April (Enquiry into Plants 7.1.2). As Portulaca it figures in the long list of comestibles enjoyed by the Milanese given by Bonvesin de la Riva in his "Marvels of Milan" (1288).

In antiquity, its healing properties were thought so reliable that Pliny the Elder advised wearing the plant as an amulet to expel all evil (Natural History 20.210). 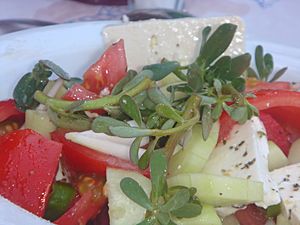 Purslane may be eaten as a leaf vegetable. William Cobbett noted that it was "eaten by Frenchmen and pigs when they can get nothing else. Both use it in salad, that is to say, raw". It has a slightly sour and salty taste and is eaten throughout much of Europe, the Middle East, Asia, and Mexico. The stems, leaves and flower buds are all edible raw or cooked. Purslane may be used fresh as a salad, stir-fried, or cooked as spinach is, and because of its mucilaginous quality it also is suitable for soups and stews. The sour taste is due to oxalic and malic acid, the latter of which is produced through the crassulacean acid metabolism (CAM) pathway that is seen in many xerophytes (plants living in dry conditions), and is at its highest when the plant is harvested in the early morning.

Aboriginal Australians use the seeds of purslane to make seedcakes. Greeks, who call it andrákla (αντράκλα) or glistrída (γλιστρίδα), use the leaves and the stems with feta cheese, tomato, onion, garlic, oregano, and olive oil. They add it in salads, boil it, or add it to casseroled chicken. In Turkey, besides being used in salads and in baked pastries, it is cooked as a vegetable similar to spinach, or is mixed with yogurt to form a tzatziki variant. In Egypt, it is also cooked like spinach as a vegetable dish, but not in salads.

As a companion plant, purslane provides ground cover to create a humid microclimate for nearby plants, stabilising ground moisture. Its deep roots bring up moisture and nutrients that those plants can use, and some, including corn, will follow purslane roots down through harder soil that they cannot penetrate on their own. 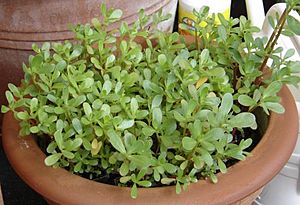 Verdolaga, the Spanish word for purslane, is a nickname for South American football clubs with green-white schemes in their uniforms, including Colombia's Atletico Nacional and Argentina's Ferrocarril Oeste.

All content from Kiddle encyclopedia articles (including the article images and facts) can be freely used under Attribution-ShareAlike license, unless stated otherwise. Cite this article:
Portulaca oleracea Facts for Kids. Kiddle Encyclopedia.