Pultneyville is a hamlet (and census-designated place) located in the Town of Williamson, Wayne County, New York, United States. The population was 698 at the 2010 census.

Framing the mouth of Salmon Creek, it is on the northern border of the town, the southern shore of Lake Ontario. The hamlet was originally laid out in 1806 and is listed with the National Register of Historic Places. At one time a significant Great Lakes trading port and site of a War of 1812 skirmish, it now is a quiet, Western New York bedroom community.

Set between the fruit orchards and a Great Lake on the Seaway Trail, many of Pultneyville's activities focus on summer sailing and theatre. The hamlet boasts an active marina and is home to the second-oldest little theater in the United States.

In the latter part of the 17th century the French traded with the Indians at the mouth of Salmon Creek, but no permanent settlement was established until circa 1800. The area is also the landing point for a French military force of 1,600 soldiers from Canada in 1687. At the time, the governor of Canada, Marquis de Denonville, was determined to destroy the Iroquois and this military expedition defeated the Senecas near present-day Victor, New York, about 25 miles south of the landing site.

Pultneyville is named for Sir William Pulteney, a British baronet who was an English land speculator. Pulteney and his partners purchased a 1,000,000 acres (400,000 ha) of the former Phelps and Gorham Purchase in 1790. There is some ambiguity as to when settlement first occurred: some sources refer to Dan Russell as being the first white inhabitant of the area in 1794, others cite "Yankee" Bill Waters in 1804. Waters' cabin was located on the peninsula just north of the harbor inlet.

In 1806 Jacob W. Hallet, a land agent for Pulteney, acquired 1,000 acres (400 ha) of the "Pulteney Estate". In 1806 the first post office was established with Hallet as its postmaster. Most of the early settlers were of English and Scot descent. In subsequent years the Dutch immigrated to this area. 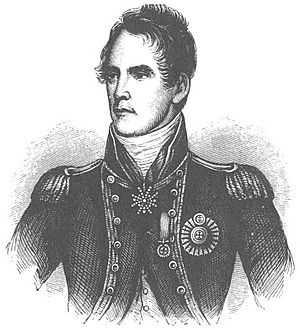 On May 15, 1814, British troops under the command of Sir James Yeo landed in the hamlet. Yeo's fleet had already successfully raided Oswego to the east and unsuccessfully attacked Rochester to the west before attempting to obtain stores from Pultneyville. After negotiations between Yeo and Gen J. Swift, commander of the Americans, an agreement was reached permitting the invaders to seize supplies without resistance (most of the residents' stores had been previously removed to a place of safety and the residents were intimidated by the size of the British fleet). A dispute broke out, however, and weapons fire began on both sides, including a cannon bombardment from Lake Ontario. Two citizens were killed and three wounded, and two were taken prisoner as the British fled. Commodore Yeo's official report to the Royal Navy stated: 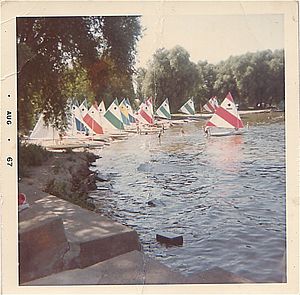 A Canandaigua, New York newspaper reported a different version of the events about two weeks later, stating that the British landed and proceeded to a warehouse before negotiations were complete. "General Swift, whose force was too inferior to justify an open attack (and which if attempted must have exposed his men to the guns of the whole fleet) commenced a fire upon them from an adjacent wood, which wounded several and became so harassing as to induce them to re-embark, when they commenced a cannonade from the fleet upon the town, which was continued for some time but with no other injury than a few shot-holes through the houses.". The two American prisoners were taken to Halifax, Nova Scotia, but were released two months later.

During the early years of the 19th century, activity in Pultneyville focused on agricultural commerce from the surrounding region (as far south as Canandaigua) and the maritime trade on the Great Lakes. Pultneyville was Wayne County's only port until the opening of the Erie Canal in 1823. From about 1811 through the 1890s (when the customs office closed), shipping in this small hamlet extended to the Atlantic Ocean and the world via the Saint Lawrence River, including eastern seaboard cities such as New York City, Boston and Baltimore. In 1865, it was home to nearly 30 Great Lakes captains, and many sailors from Pultneyville crewed on whalers around the world. In 1874 the first railroad appeared when the Lake Ontario Shore Railroad line opened and the center of trade moved three miles south to Williamson. Pultneyville's significance as a commerce center sharply declined, and the customs house was closed in 1892. 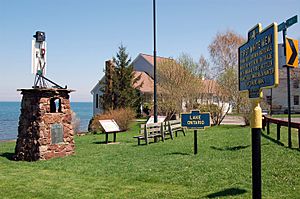 In 1985 parts of the hamlet were designated an historic district and listed with the National Register of Historic Places as the Pultneyville Historic District. The honor recognizes the community's architectural significance, particularly in the areas of Federal, Second Empire, and Greek Revival styles. Additionally, Gates Hall, a structure built in 1825 as a multi-denominational church, is still in use as a performance theater and meeting hall. It, too, is listed with the National Register of Historic Places (2000) in recognition of its contributions in the areas of architecture (Queen Anne and Greek Revival), social history, and performing arts. During the second quarter of the nineteenth century lectures on the evils of alcohol and slavery, the merits of women's suffrage, phrenology and spiritualism were held in the church. During the Civil War the church was used for packing barrels of supplies for Union Army soldiers. In 1867, the Pultneyville Lyceum began performing improvised stage productions with gasoline lamps serving as spotlights. Contemporary community theater organizations have continuously staged productions in the building since 1961. As a result, the Library of Congress found Gates Hall to be the second-oldest little theater in the United States.

According to the United States Census Bureau, the CDP has a total area of 2.2 square miles (5.7 km2), all of it land.

There were 293 households out of which 21.8% had children under the age of 18 living with them, 67.6% were married couples living together, 7.5% had a female householder with no husband present, and 21.8% were non-families. 18.8% of all households were made up of individuals and 7.8% had someone living alone who was 65 years of age or older. The average household size was 2.38 and the average family size was 2.69.

All content from Kiddle encyclopedia articles (including the article images and facts) can be freely used under Attribution-ShareAlike license, unless stated otherwise. Cite this article:
Pultneyville, New York Facts for Kids. Kiddle Encyclopedia.