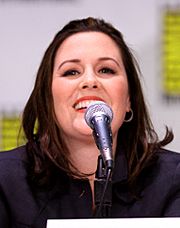 Rachael Ann MacFarlane (born March 21, 1976) is an American voice actress best known for her voice roles in Codename: Kids Next Door as supreme leader Numbuh 362, The Powerpuff Girls voicing various characters and Blossom in outside of media series, and the FOX television animated series Family Guy and American Dad!, both created by her brother Seth MacFarlane. She was born in Kent, Connecticut. She has been married to Spencer Laudiero since 2008. They have two daughters.

All content from Kiddle encyclopedia articles (including the article images and facts) can be freely used under Attribution-ShareAlike license, unless stated otherwise. Cite this article:
Rachael MacFarlane Facts for Kids. Kiddle Encyclopedia.