The name "Rayleigh" is Saxon in origin and is cognate to the German place name Rehlach of the same meaning . According to the English Place Names Society, "Rayleigh" derives from "raege", and "leah", meaning "Female roe-deer stream" or "she-goat stream" . According to the Rayleigh Civic Society, "Roa" is a Saxon word for Roebuck and "Lea" a pasture probably for goats.

In any case, the connection with deer continued through the centuries. Lands around Rayleigh were used as royal hunting forests for many hundreds of years. A deer was included in the coat of arms of Rayleigh Urban District Council, and in the early 2000s, a new pub was named the "Roebuck".

There have been a scattering of stray finds around the town from Prehistoric and Roman times, including some Roman roof and hypocaust tiles found within the fabric of Rayleigh Church. This suggests there was a Roman habitation site within the area. However, there is little evidence of any density of population here during this period.

One significant archaeological find was in the early 2000s at the western edge of Rayleigh, at the site of the former Park School in Rawreth Lane. An early Saxon cemetery site was discovered here, with 144 cremation burials and evidence of just one high-status female inhumation burial.

By the end of the Saxon period, there was definitely a village here, as it is recorded in the Domesday Book, when it was held by Swein of Essex, the son of Robert FitzWimarc.

The most significant historic monument in Rayleigh is the great medieval mound of Rayleigh Castle. This was an early Norman motte and bailey castle, of which only the motte and its surrounding embankments remain. Despite the loss of its timber superstructure and later stone buildings, its height and bulk mean that it still dominates the town centre.

A courthouse was erected in Rayleigh in 1338. This was apparently resented by the townspeople, who turned out in force to destroy it, with 20 ringleaders later arrested and tried.

The forests around Rayleigh were royal hunting grounds. It is recorded that King Henry III hunted here in 1222, and the three King Edwards also visited.

Rayleigh Castle gradually fell into disuse, and in 1394 King Richard II gave permission for the townspeople of Rayleigh to use the foundations as a source of stone. By this time, the site was in royal ownership and used for pasture:

know all men of special grace who have the will to repair certain Chapel in the said town and to build a new a certain belfry we have granted them the foundations and to take away and use any stones found theren".

Following the granting of this permission, the Rayleigh parish church, Holy Trinity, was built in the Perpendicular Period style, during the 15th century.

Records indicate that the church was rich in plate, vestments and stained glass, but these were disposed of:

"No church within the hundred was more splendidly adorned; none were so richly furnished with plate, vestments and other accessories for the celebration of the divine service; none were so rich in painted glass; none have been more mercilessly despoiled"

During Henry VIII reign deer were constantly taken from here to replenish the herds in Greenwich Park.

Rayleigh used to have its own stadium, the Weir Stadium, where greyhound dog racing and speedway racing took place. Rayleigh Rockets Speedway team competed against other clubs from around the country in the late 1940s, early '50s, '60s and into the '70s. The stadium was situated adjacent to the Weir roundabout along the A127. Stock car and banger racing also took place there. The stadium was sold for redevelopment in the mid-1970s, and the site is now occupied by Sainsbury's and other retail stores. These stores are accessed via Stadium Way.

Rayleigh also used to feature a cinema, the Regal, located close to Mill Hall; retirement accommodation (called Homeregal House in "memory" of the Regal) is now in its place. Rayleigh Town Museum has a projector and extensive archives of the cinema.

During the 1990s many new housing estates appeared on formerly greenfield areas of the town, with the East of England region currently pushing for even more homes to be built in the area. This has caused some controversy locally, with residents of Rayleigh feeling that the areas surrounding the town should be preserved with more care.

Rayleigh has two skate parks, Rawreth Skate Park near ASDA, and King George's Skate Park, both of which were being refurbished as of May 2011.

There is a small swimming pool at Lubard's Farm.

Rayleigh has a golf club on the outskirts of the town; Rayleigh Club (previously Lords Golf & Country Club) is situated on Hullbridge Road to the north of the town.

Rayleigh has two cricket clubs: Rayleigh Fairview Cricket Club who play at Rayleigh Town Sports and Social Club, with three Saturday teams currently playing in the T. Rippon Mid Essex Cricket League; and Rayleigh Cricket Club, who were formed in 1902 as the Rayleigh and District Cricket Club. In 2004, their new pavilion situated in Rawreth Lane was completed, and league cricket is now played on the ground.

Motor cycle speedway racing was staged at a greyhound track before the war (circa 1933) and at the Weir Stadium after the war. The team were known as the Rayleigh Rockets.

Rayleigh has a number of parks and playing fields.

King George's Field is close to the town centre and has several entrances. There is a skateboard and children's play areas, accessed from Bull Lane.

Sweyne Park is controlled by Rochford District Council. It is situated north of Sweyne Park School. 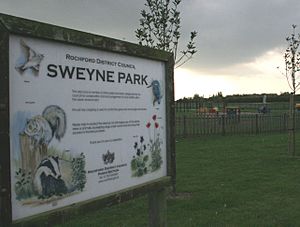 It can be accessed in several ways. The entrance in Downhall Park Way has a small car park, and there is a play area. It has another smaller entrance in Downhall Park Way, adjacent to Canterbury Close. It can also be accessed from Victoria Avenue. In 2008 an entrance was established from Priory Chase. The park has a pond. It has a bridleway running round its perimeter of about 2 km (1.2 mi). The majority of the park is grassland which is cut for hay to control it and encourage wild flowers.

Kingley Wood stands on a steep hill slope beside the A127 and is visible as you approach Rayleigh from London. The small wood is the only surviving ancient wood in Rayleigh, but it has rich and varied wildlife and a well-documented history. It can be approached by foot from Western Road, Hollytree Gardens or Weir Farm Road.

This is a 64-acre (26 ha) broadleaved wood established in the late 1990s. The wood was designed and planted by a partnership of Local people and the Woodland Trust. There is a car park at the Grange Community Centre in Little Wheatley Chase, and access to the wood is across the playing fields. 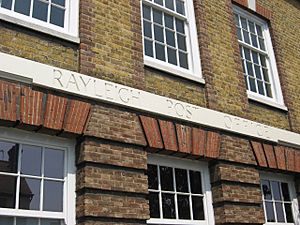 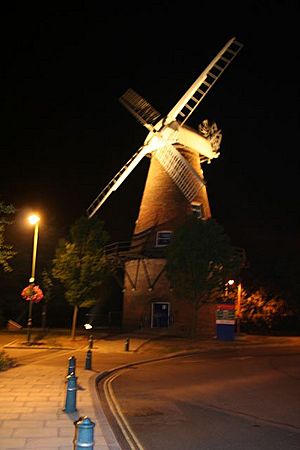 The town has grown considerably in the last 25 years.

A new museum opened on April 9th 2016, Rayleigh Town Museum. It is open on Wednesday, Friday, Saturday and Sunday 10am to 4pm. http://www.rayleightownmuseum.co.uk/

A 49-room Premier Inn is situated on the southern boundary of the town, adjacent to the Weir roundabout and the A127. The town's amenities include several public houses, restaurants, shops, and an indoor market (Rayleigh Lanes).

There is a small outdoor market on Wednesdays. Until 2011 it was located next to Rayleigh Civic Suite and Information Centre, opposite Holy Trinity Church. In 2011 it moved to the taxi rank in the town's High Street (outside Boots). The market dates back to before 1181 when it was inscribed in the Exchequer Records of Henry II.

The library is situated in the south end of the High Street, opposite the police station.

The Dutch Cottage, the smallest and oldest council house in the United Kingdom, can be visited on Wednesdays by prior appointment.

Rayleigh has a football team named Rayleigh Boys. They play matches at the park adjacent to Grove School and also at Fairview Park. The teams run from the age of five up to 16 years old.

Rayleigh windmill has been renovated, including a structural renovation of the 19th century brick built building has now been completed.

The basic external brickwork has been repaired and the interior has been transformed to provide four storeys of modern display facilities which has turned the windmill into a major tourist and educational attraction in the county. The changes to the windmill allow the public to view the interior and to exploit this local historic amenity for cultural, educational and tourism use.

Rayleigh Mount, a National Trust property adjacent to Rayleigh Windmill, is the site of a Domesday castle erected by Sweyn of Essex with distinctive motte-and-bailey defences. From its summit it offers sweeping views across the Crouch Valley.

Rayleigh has a number of public houses, including Half Moon, Paul Pry, Rayleigh Lodge, The Roebuck, Spread Eagle, Travellers Joy, The Weir and Ye Olde Crown.

Rayleigh Brass is a brass band. The band has been established in South Essex for almost one hundred years. They play a varied programme to a high standard and have a reputation for a progressive and changing repertoire of music. Current musical director (2009) Alan Thorpe.

Harmonie Concert Band is a symphonic wind band, based in Rayleigh (Warehouse Centre) and have been playing music for the local Essex and surrounding community since 1976.

Rayleigh Horticultural Society are one of the biggest societies in the area, with over 1000 household members, celebrating over 65 years. They have a Committee who work to provide activities of interest to all types of gardeners. For the showman, the allotment holder, the plant enthusiast and those who just like to potter around.

The Rotary Club of Rayleigh Mill organise events for Charity. It was founded 5 June 1995.

The Lions Club of Rayleigh was chartered in 1974 and serves the Rayleigh, Hockley, Hullbridge and Rochford areas. The club is a Voluntary Service Organisation and a registered charity. 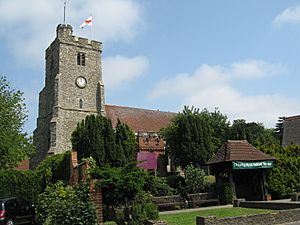 The Church of England parish church of the Holy Trinity is at the top of the High Street. A church existed on the site in Saxon times and the present building has a Norman chancel. The bell tower was built in the 15th century and includes stone taken from the castle when that fell into disuse. The church has an impressive Tudor brick porch. The Gothic Revival architect C.C. Rolfe restored the chancel in 1873.

The parish church of Saint Michael and All Angels is in Sir Walter Raleigh Drive near Sweyne School. It was built in the 1950s when Rayleigh expanded considerably. It has a multi-purpose building which is used by other local groups as well as the church.

Our Lady of Ransom Catholic Church is on London Hill.

The United Reformed Church is on Crown Hill.

The Baptist Church is in the High Street. The building opened for worship on 25 March 1799, shortly before the first Pastor, Rev James Pilkington, was inducted in June 1799. In June 1979, work started on a church extension. This added significantly more seating and completed some much needed repairs. 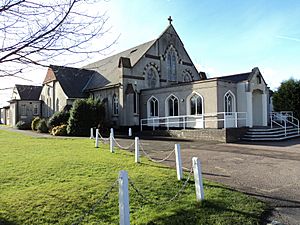 The Methodist Church is on Eastwood Road. (Moved from the High Street in 1934).

Grange Free Church is on London Road, at the junction with Langdon Road.

All content from Kiddle encyclopedia articles (including the article images and facts) can be freely used under Attribution-ShareAlike license, unless stated otherwise. Cite this article:
Rayleigh, Essex Facts for Kids. Kiddle Encyclopedia.