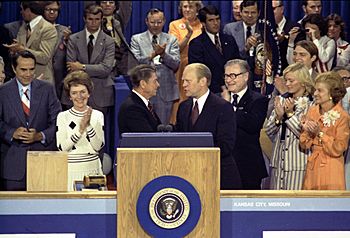 The 1976 Republican National Convention at Kemper Arena in Kansas City. Vice-Presidential Candidate Bob Dole is on the far left, then Nancy Reagan, former Governor Ronald Reagan is at the center shaking hands with President Gerald Ford, Vice-President Nelson Rockefeller is just to the right of Ford, followed by Susan Ford and First Lady Betty Ford.

The 1976 Republican presidential primaries were the selection process by which voters of the Republican Party chose its nominee for President of the United States in the 1976 U.S. presidential election.

Current President Gerald Ford was selected as the nominee through a series of primary elections and caucuses which was held in the 1976 Republican National Convention. It was held from August 16 to August 19, 1976 in Kansas City, Missouri. The 1976 primary was the first Republican primary to hold primaries in every state, the Democrats held the first nationwide primary in 1972.

All content from Kiddle encyclopedia articles (including the article images and facts) can be freely used under Attribution-ShareAlike license, unless stated otherwise. Cite this article:
Republican Party presidential primaries, 1976 Facts for Kids. Kiddle Encyclopedia.