Riederalp is a municipality in the district of Raron in the canton of Valais in Switzerland. It was created in 2003 through the merger of Goppisberg, Greich and Ried-Mörel.

The mid-mountain resort sits on a south-facing terrace, south of the 23 km (14 mi) long Aletsch Glacier—Europe's largest, in the Bernese Alps. The altitude of the village (1,930 m [6,330 ft]) allows good view of the Pennine Alps with some of its highest summits such as the Fletschhorn, Dom and Matterhorn. 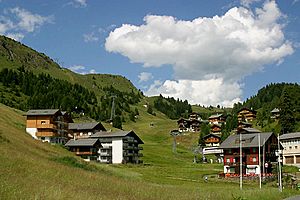 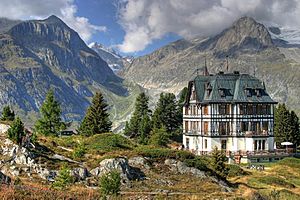 Villa Cassel. Situated near the great Aletsh glacier, it is one of the two national nature centers of Pro Natura.

The entire villages of Goppisberg and Greich are designated as part of the Inventory of Swiss Heritage Sites.

All content from Kiddle encyclopedia articles (including the article images and facts) can be freely used under Attribution-ShareAlike license, unless stated otherwise. Cite this article:
Riederalp Facts for Kids. Kiddle Encyclopedia.