The City of Rifle is a Home Rule Municipality in Garfield County, Colorado, United States. The population was 9,172 at the 2010 census, up from 6,784 at the 2000 census. Rifle is a regional center of the cattle ranching industry located along Interstate 70 and the Colorado River just east of the Roan Plateau, which dominates the western skyline of the town. The town was founded in 1882 by Abram Maxfield, and was incorporated in 1904 along Rifle Creek, near its mouth on the Colorado. The community takes its name from the creek.

The land that Rifle resides on was once in the heart of the Ute Nation, a classification of the Indigenous peoples of the Great Basin. The most common tribe in the area were the Tabagauche, who hunted and lived on the land slightly to the east of Rifle in the Roaring Fork Valley. Due to their location, the Tabagauche were somewhat less exposed to white settlers, and to some extent their ways remained less altered than other native peoples. In 1879, Nathan Meeker was appointed as the director of the White River Ute Agency (the town of Meeker 40 miles north of Rifle was named after him). Meeker had no training or knowledge of Ute culture, and launched into a campaign centered on sedentary agriculture and European-American schooling. As this clashed with the culture of the nomadic Utes, he was met with resistance. It all came to a head when Meeker had the pasture and racetrack for the Ute's horses plowed under. The event that followed is known as the Meeker Massacre, during which Meeker and his 10 employees were killed. Aftermath of the conflict resulted in nearly all members of the Ute nation being forcibly removed from Colorado into eastern Utah, despite the fact that they had been formerly guaranteed the land on which they were residing by the federal government.

Rifle became more and more settled as the 19th century gave way to the 20th. In 1889, the railroad cut through from the east and ended in Rifle for a while before connecting lines were completed. This opened up the floodgates for new travelers, settlers, and trade. Long drives of cattle over the mountains towards the Front Range and Denver became a thing of the past. Rifle was now a thriving hub for commerce. If it needed to be shipped east to a buyer's market, or shipped west into ranching country, it came through town.

The first major economy known to Rifle was ranching. The land surrounding the town was arid, and much of it was unsuitable for farming without irrigation. Despite the large stretches of land available, tension arose and manifested between those who tended cattle and those who herded sheep. Good grazing practices were not in place, and the summer pastures at the top of the Roan Plateau were contested over. One rancher lost two-thirds of his flock and went bankrupt when competing cowboys drove the sheep over the cliff.

Rifle is located in the east portion of the Piceance Basin. The basin is home to different forms of fossil fuels, the largest quantity of which is oil shale. The unreliability of this fossil fuel has left the city in the throes of a cycling boom and bust economy.

As of 2007[update], an organization called the Campaign to Save Roan Plateau has been engaged in an effort to minimize oil and gas drilling on the top of the Roan Plateau, which locals call the Bookcliffs. The Roan Plateau is accessible from the JQS Trail, located 3 miles (5 km) north of Rifle, or from the Piceance Creek road. 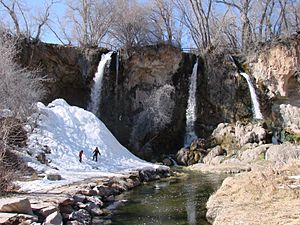 There were 3,221 households, out of which 40% had children under the age of 18 living with them, 30.8% were married couples living together, 10.1% had a female householder with no husband present, and 30.8% were non-families. 23.5% of all households were made up of individuals and 7.1% had someone living alone who was 65 years of age or older. The average household size was 2.81 and the average family size was 3.35. 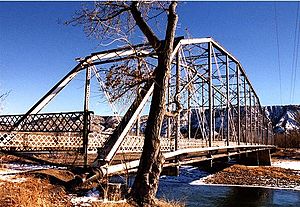 Rifle Bridge in winter on the Colorado River. The bridge, built in 1909, is now closed to traffic and is listed on the National Register of Historic Places.

6 miles (10 km) north of the center of the city is Rifle Creek Golf Course.

in 2014, the New Ute theater was opened in downtown Rifle.

Rifle is home to the Garfield County Fair Grounds. One week out of the year, the city bustles with activities surrounding family and professional rodeos, Xtreme bull riding, live music, and a demolition derby.

On August 10, 1972, Christo and Jeanne-Claude completed the Valley Curtain project at Rifle Gap, 6 miles (10 km) north of town. The completed curtain hung for only 28 hours before it was ripped by a gust of wind.

A portion of the film Vanishing Point was filmed in Rifle. Scenes include a shot of Kowalski's car crossing Rifle Bridge, and confronting Utah state patrol cars.

Rifle is also mentioned in Stephen King's The Stand.

In the summer of 2014, a popular local restaurant, Shooter's Grill, made national news when it was advertised that the owner encouraged the servers to participate in open carry. Patrons of the restaurant were also welcome to display their firearms when dining.

All content from Kiddle encyclopedia articles (including the article images and facts) can be freely used under Attribution-ShareAlike license, unless stated otherwise. Cite this article:
Rifle, Colorado Facts for Kids. Kiddle Encyclopedia.