Rigaud is a city in southwestern Quebec, Canada in the county of Vaudreuil-Soulanges in Vallée-du-Haut-Saint-Laurent region. It is located at the junction of Ottawa River and Rigaud River. It is situated about 70 kilometres west of downtown Montreal and 130 kilometres east of Ottawa. The population as of the Canada 2011 Census was 7,346. 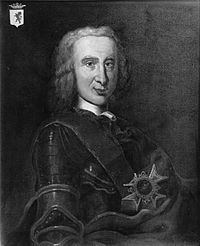 Rigaud is located on the traditional territory of the Algonquins, who fled the region due to violent attacks by the Iroquois before the arrival of the French. Étienne Brûlé was the first European to go back in Ottawa in 1615. The Seigneury of Rigaud, granted in 1732 to the brothers Pierre and François-Pierre de Rigaud de Vaudreuil, governors in New France, saw its first settlers settle in 1783, under the leadership of Lord Alain Chartier de Lobtinière. At the beginning of the 19th century, the locality developed rapidly as an accommodation relay for loggers, and as a loading point for timber and cereals. The establishment of the parish of Sainte-Madeleine, the banal seigneurial mill on the Rigaud River and the Pointe-Fortune-Carillon crossing on the Outaouais.

“  The history of Rigaud is much more than the arrival of the first of its ministers, the construction of the first church, the civic erection of the parish, the village, then the city, the founding of the College and of the Convent, the inauguration of the sanctuary of Lourdes, the opening of the first school, what else do I know? It is above all and above all the history of man, of his joys, his sorrows, his aspirations, his desires, his hopes, his disappointments, his miseries, his successes, his qualities. and its flaws. And in this man, what interests me is his way of living, of working, of loving, of suffering, of having fun and, let's say it, of sinning." Robert-Lionel Séguin, ethnologist 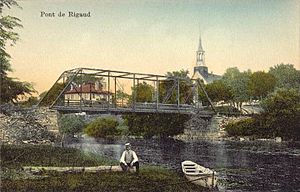 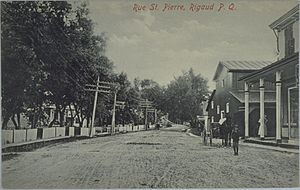 Rigaud is located at the northwestern part of the Suroît region, on the south shore of Lac des Deux Montagnes, a widening of the Ottawa River, leading north towards the Laurentians region. It extends along the Rigaud River back from Ottawa, and several hamlets are built for certain riparian areas of the lake, others as old industrial centers in the plains, or more recently, rural residential developments. The western limit of the municipality constitutes the interprovincial border with the United Counties of Prescott and Russell, in Ontario.

Dairy and cattle farms dominate the western part of the territory, while the equine farms propagate in the east and north, and that several sugar bushes are exploited on the mountain. In addition to this agricultural activity, there are sand pits, as well as resort and leisure areas, and particularly winter and hiking sports and camping, as well as commercial and service areas serving both the surrounding population and traffic. transit . The population of Rigaud is around 7,700 inhabitants, as per the 2016 Census. Rigaud remains a regional community, unlike neighboring cities to the east, which have been integrated into the Montreal Metropolitan Area.

Neighbouring municipalities are Hudson, Vaudreuil-Dorion, Sainte-Marthe, Très-Saint-Rédempteur, East Hawkesbury and Pointe-Fortune. The municipality located across Ottawa River is Saint-André-d'Argenteuil. The geographic location of Rigaud, at the head of the Ottawa River and between the Montreal and Ottawa metropolitan areas, has contributed largely to its economic development throughout its history.

The municipality covers a total area of 113.71 km2 , of which 99.13 km2 are terrestrial. The relief is composed, on the North side, of the Ottawa River plain, which is part of the St. Lawrence Lowlands and, on the South side, of the Rigaud Mountain. The plain is partly agricultural, partly wooded and partly urbanized. It has three subspaces: wetlands and lowlands, which are prone to flooding as they are located along the Ottawa River; the indentations and embankments of the Rigaud and Raquette rivers; and, the flat terrace, which makes up most of the territory. The soils of the plain consist of alluvial deposits, and Pointe à la Raquette is particularly alluvial and muddy  .

The Lac des Deux Montagnes and the Rigaud mountain dominate the landscape. The Rigaud mountain covers 47km2 , and is divided into three physiographic units: the escarpment to the north-west; the central plateau modulated by local peaks; and the lower slopes to the east and north.

The forest mainly composed of rocky surface and loam, and approximately a third of its area is rocky and rugged . This bottom moraine consists of pieces of rock that a glacier has torn from its bed, the bedrock of the Canadian Shield, chunks he shrunk and rounded as he rolled over them, carrying them and losing them in this bowl, a few thousand years ago, at the end of the Wisconsin Ice Age. 8,500 years ago, when the lowlands of the St.Lawrence rose directly to the Champlain Sea, the Rigaud stadium was characterized by the powerful rivers which drained water from the present-day Great Lakes, transporting immense quantities of sand, thus forming the terraces of Rigaud and the plateau of Saint-Lazare. The lithology of Rigaud is characterized by three zones:

The Rigaud Mountain is home to one of the only two ancient forests of Suroît. The forest is generally intermediate there, with mature areas on the northern flank. Areas of young forest also line the shore of the Ottawa River. The forest stand is characteristic of the bioclimatic domain of the maple hickory stand. The hill is populated mainly with maple and beech groves. The exceptional forest ecosystems foster an extensive catalogue, of which a hemlock grove/red spruce forest, a red oak grove, a moist cedar forest with fir, a maple hickory and a maple linden forest on Rigaud mountain, as well as a silver maple with red ash, a maple hickory, and a group of oval hickory around the edges of Brazeau and Quesnel bays. The Rigaud Mountain is home to about 250 white-tailed deer, as well as to the spotted salamander. It is also home to 250 species of birds, including the great woodpecker, the wild turkey, the ruffed grouse, as well as to owls. A large number of aquatic and migratory birds also live in wetlands, particularly on the shores of the Brazeau and Rigaud bays, as well as at Pointe à la Raquette.

Occupation of the territory

The plain constitutes a territory favorable to agriculture, to the passage of infrastructures and to urban development. The mountain of Rigaud, because of its relief and the poor quality of its soil, remains preserved in terms of forest cover, although it includes extensive residential development and recreational activities. More than a third of the territory of Rigaud is forest.

The farmland used in Rigaud is mainly to the west, on the left bank of the Rigaud River for market gardening purposes. The plain of the Rivière à la Raquette to the east is little occupied in its northern part due to the presence of swamps in the point; the territory is occupied for various purposes including a sand pit, a transit service center, a campground and small horse farms. Rigaud mountain, along the crest of Chemin Saint-Georges

and at the top of Rue Bourget, offers a view of the Ottawa River and the Laurentians. It is a wooded sector, with hiking trails, a few isolated sectors of recent country residences as well as old cabins, to which are added recreational and tourism operations.

The village of Rigaud, which roughly corresponds to the old town of Rigaud, is made up of old and of traditional Quebec architecture. It is organized around the primary roads that are Saint-Jean-Baptiste and Saint-Pierre streets, as well as Saint-Viateur Street. It includes almost all the businesses, shops, services and institutions of the municipality. The industrial companies are located in three industrial parks on the edge of the urban core, namely the industrial parks of the Cooperative, Doctor-Oscar-Gendron and J.-Marc-Séguin.

The cadastre and the arterial road network of Rigaud are structured around nine original concessions of the seigneury of Rigaud. Several hamlets and built-up areas dot the rural territory: La Baie, on the edge of Rigaud bay to the west of the village; Rigaud-sur-le-Lac (Bas-de-la-Rivière), on the Ottawa River at the mouth of the Rigaud River, consists of old chalets, many of which have been transformed into residences, is experiencing recent residential development; Dragon (Grande Ligne), near Pointe à la Raquette on the edge of the railroad, was developed during the First World War.

The toponym of the hamlet comes from the golden dragon represented on the logo of the company Northern Explosive who was established there; Choisy [fr] (Anse-à-la-Raquette), old and rural, is located on the edge of Anse near Hudson; Petit-Brûlé — Haut-de-la-Chute, rural country sector bordering the Rigaud and Rigaud Est rivers. The soil in this area is subject to landslides; Mountain Ranches, made up of recent rural residential pockets on the north side of the Rigaud mountain; it is accessible by the Town Hall path; Saint-Georges, on the Rigaud mountain plateau.

The main orientations of the municipality in terms of town planning are defined as follows: 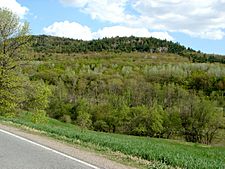 The main attraction is Mont-Rigaud, a hill with downhill ski runs (at Ski Mont Rigaud), a private school (Collège Bourget), a monastery, and a shrine dedicated to the Virgin Mary (Sanctuaire Notre-Dame-de-Lourdes). The mountain is also home to an unusual, natural rock garden known as the "champs de patates", so named because of the local legend that it was once a potato field, turned to stone by God because the farmer worked on Sunday.

On the opposite side of the mountain is a residential community known as "Mountain Ranches." The middle to upper-middle class community features large, mostly secluded building lots in a wooded setting that draws residents because of its isolated tranquility and privacy. As such, it was the hiding place for fugitive Charlie Wilson, one of the leaders of the notorious 1963 Great train robbery in England. This area was also known for its "tree farms" in the 1960s and 1970s, providing a tax shelter for the well off, until the tax laws were later changed to require harvesting of those "tree farms". The "Pitcairn Tree Farm" was one such example.

Other attractions include the Sanctuary of Notre-Dame-de-Lourdes, the Collège Bourget, the legend of the Champ de guérêts, commonly referred to as the "potato field", its maple and blueberry products, and the local microbrewery Le Castor.

A training center for the Canada Border Services Agency is located in Rigaud.

Nearly a hundred mobile homes are located at the south-eastern end of the territory along the Rivière à la Raquette near the Choisy campsite. This campground and Camping Trans-Canadien, located northwest on Lac des Deux Montagnes, have 746 sites, which increase the population in the summer  .

The Rigaud station was the former terminus of the AMT commuter train to downtown Montreal.

On 1 July 2010, service to Rigaud was discontinued, as the town was unable to pay the $300,000 annual fee to the AMT to allow service to continue to the town. After that date, the rail line ends at Hudson.

The town is served by the 61 bus from Exo La Presqu’Île.

All content from Kiddle encyclopedia articles (including the article images and facts) can be freely used under Attribution-ShareAlike license, unless stated otherwise. Cite this article:
Rigaud, Quebec Facts for Kids. Kiddle Encyclopedia.