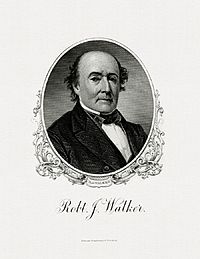 President Polk asked Walker to become U.S. Secretary of the Treasury. Walker was the Treasury Secretary during all of Polk's presidency (from March 8, 1845 until March 5, 1849).

As Treasury Secretary, Walker was responsible for financing the Mexican–American War. However, he did not do a very good job.

In 1853, President Franklin Pierce asked Walker if he wanted to be the United States Minister to China, but Walker said no.

He was chosen to be governor of Kansas Territory on May 27, 1857 by President James Buchanan. However, he quit in December 1857. He quit because of he didn't agree with the Lecompton Constitution. In a resignation letter to Secretary of State Lewis Cass dated December 15, 1857, he said his reasons for quitting was because clear voting fraud and improper political pressure from Franklin Pierce's administration. 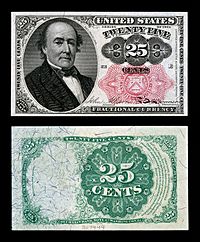 Walker died in Washington D.C. on November 11, 1869. He is buried at Washington's Oak Hill cemetery. His son-in-law Benjamin H. Brewster became Attorney General under Chester A. Arthur. Many of his papers are held by the University of Pittsburgh. The University has put them online them.

All content from Kiddle encyclopedia articles (including the article images and facts) can be freely used under Attribution-ShareAlike license, unless stated otherwise. Cite this article:
Robert J. Walker Facts for Kids. Kiddle Encyclopedia.