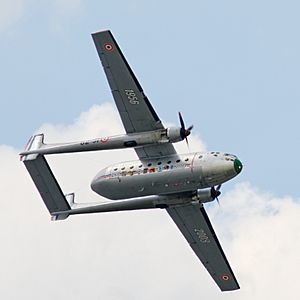 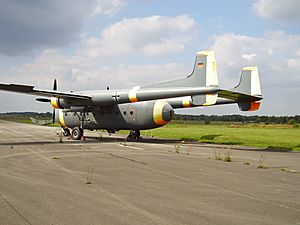 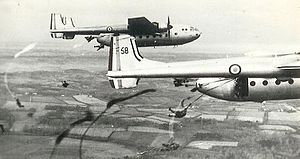 The SNCAN N.2501 Noratlas or simply Noratlas is a post-war military French transport aircraft designed and built by Société Nationale de Construction Aéronautique du Nord. It was use by several air forces like Armée de l'Air, Luftwaffe, and Israeli Air Force. It was built under licence in Germany. It's first flew in septembre 1949 and was introduced in 1953. France retired its last one in 1984.

The Noratlas is a twin-boom, twin-engine aircraft. Built in metal it has a high wing, and twin-tail. It can carry 35 paratroopers, or 17 injured peoples on stretcher. On freighter configuration it can carry 7 900 kg for cargo missions. Cockpit is for 2 or 3 peoples : pilot, co-pilot, and sometimes navigator.

Some Noratlas were used like electronics warfare aircraft by French Air Force. In this kind, the Gabriel or Grise (grey in French) had got a crew of 8 or 9 peoples.

All content from Kiddle encyclopedia articles (including the article images and facts) can be freely used under Attribution-ShareAlike license, unless stated otherwise. Cite this article:
SNCAN N.2501 Noratlas Facts for Kids. Kiddle Encyclopedia.