Salmon Arm is a city in the Shuswap Country of the Southern Interior of the Canadian province of British Columbia that has a population of 17,464 (2011). It is on the shores of Shuswap Lake, where the Salmon River empties into the Salmon Arm reach of the Lake. It is a tourist town in the summer, with many beaches, as well as camping facilities and house boat rentals. Salmon Arm is home to the longest wooden wharf in North America. It is the location of the head offices of the Columbia-Shuswap Regional District. Salmon Arm became a city on May 15, 1905, and in 2005, its 100th anniversary of incorporation was commemorated with a minted coin worth C$3 local value. Directly north of the city, across Shuswap Lake, lies Mount Bastion.

The largest employer in the Salmon Arm area is the forest industry and related businesses; however, due to economic conditions, the former Federated Co-Op sawmill has been out of operation since 2008, although the co-located plywood production facility has generally remained operational. The plywood plant is now owned by Gorman Bros. Lumber Lrd. The city benefits from access to the mainline of the Canadian Pacific Railway, which passes through the city.

Tourism is also important to Salmon Arm, bringing many tourists from Vancouver, Calgary and Asia. Most tourists arrive during the summer season, either stopping en route to other holiday destinations, or to visit Shuswap Lake, often via rental houseboats and which has recreation residential communities and campgrounds all around its shores. Salmon Arm has several hotels, campsites and houseboat rental outlets.

Relative to its size, Salmon Arm has a wide variety of restaurants and cultural attractions. Public beaches at Sunnybrae and Canoe are often crowded during the summer.

Little is known about the history of Salmon Arm preceding the laying of the Canadian Pacific Railway in September, 1885. While miners and settlers looked for gold in the surrounding areas, the beaches of Salmon Arm lay virtually untouched. In 1890, five years after the railway was built, the residents of the town requested and obtained a post office. At the time, there was only a population of 28 residents. By the end of the 1890s, the town had grown to include many new buildings such as two general stores, a school, and a hotel. The population had also grown to include over 200 citizens.

By 1904, Salmon Arm had acquired a reputation for having an excellent fruit harvest. The local businessmen grew fruit as a main export, sending it to the larger, more populated towns that surrounded it. The displays for their crops could be located in stores in Kamloops and New Westminster, and the Hudson's Bay Company in Vancouver often featured an entire local Salmon Arm display.

In May 1905, a formal local government was started by the request of its citizens. The main concerns brought to the government centered on the building and repairing of roads.

Later on, in 1912, Salmon Arm upgraded its town status to an official city. They did this in part to receive funds from the provincial government to assist in road improvement, which was still a continued concern, and also to build a public water system. With the money they received, it didn't take long to fulfill their second project as Salmon Arm's first water system was official turned on in January 1914.

Electricity came to Salmon Arm in 1913, with the acquiring of its first diesel engine and in 1928 Salmon Arm became a part of the West Canadian Hydro-electric company grid.

In 1951, Princess Elizabeth, Duchess of Edinburgh and Prince Philip, Duke of Edinburgh visited Salmon Arm while on a royal tour of Canada.

On August 8, 1982, while Prime Minister Pierre Elliott Trudeau and his sons passed through Salmon Arm, they were confronted by three demonstrators protesting "high unemployment and the way the Prime Minister was handling the economy." Trudeau infamously gave the protesters the finger; his gesture was caught on a single television camera and immediately used by some as, "a vivid symbol for those who thought the Liberal prime minister arrogant and hostile to Western Canada."

However, to many Trudeau's response was seen as a commemorated joke. Only a month after the incident T-shirts, which depicted a characturized Trudeau leaning out of a train with his middle finger raised, were being produced and sold to the citizens of Salmon Arm.

With a December and January mean of −3.7 °C (25.3 °F) and a July mean of 19.1 °C (66.4 °F), Salmon Arm has a warm-summer humid continental climate with strong maritime influences as a result of its relative proximity to the Pacific Ocean.

The summer months are when the city experiences it largest fluctuation of population with people on holidays coming to visit the city and surrounding area. During every third weekend of August the annual Salmon Arm Roots and Blues festival draws large crowds of festival goers with an international roster of performers. The Festival emerged from the Shuswap Coffee House movement of the 1970s and 80's, which by 1991 had coalesced into the non profit Salmon Arm Folk Music Society, the Festival's founding body. From its grassroots beginnings, Roots & Blues has grown into the largest and most musically diverse festival in the British Columbian interior. In July 2011 there was the first annual Sturgis North Motor Cycle Rally. Even though the city of Salmon Arm had mixed feelings for the event, 35,000 people attended. There is also the annual Shuswap International Writers' Festival.

Salmon Arm is home to a multiplex movie theatre (Salmar Grand) and a single screen theatre for movies and live stage performances (Salmar Classic); both are owned and operated by a non-profit community organization, the Salmar Community Association. Additionally, a community theatre society hosts plays and other live stage performances (Shuswap Theatre) in a building across the street from the Salmar Grand multiplex.

The RJ Haney Heritage Park & Museum is Salmon Arm's main museum, and celebrates the history of the region. The museum often offers a dinner theatre program during the summer months, with the theatre component offering plays based on local history.

Salmon Arm is home to a branch of Okanagan Regional Library (ORL), which is currently located in Piccadilly Mall.

The Salmon Arm public art gallery is the Shuswap Art Gallery, housed in a historic building owned by the city. The building was originally a post office, and later housed the Salmon Arm branch of Okanagan Regional Library for many years.

Large crowds of tourists and locals are drawn to the beaches at Sunnybrae, Canoe, and elsewhere on Shuswap Lake during the summer. The city has many large hotels, as well as berths for a number of houseboats.

The community offers a number of recreational facilities and sports leagues. There are fields for soccer/rugby/football, fields for baseball/softball, as well as a 6 sheet curling rink (SACC), five-pin bowling lanes (lakeside lanes bowling center), several golf courses and many seasonal recreational businesses. The proximity of the Shuswap Lake has also resulted in a growing interest in rowing and paddling sports, particularly dragon boat racing.

The Salmon Arm Silverbacks hockey team, in the BCHL, plays at Shaw Centre (formerly the Sunwave Centre). The publicly owned twin ice rink facility is named in relation to the facility's community sponsor, Shaw Cable (which purchased the local, independent cable service provider SunCountry Cablevision in June 2011; SunCountry had branded its highspeed cable Internet service as Sunwave.net, and had sponsored the ice rink facility under the name Sunwave Centre). Co-located in the same area with the Shaw Centre are the city's recreation centre (with pool, racquet courts, weight facility and auditorium/gymnasium), curling rink, lawn bowling facility, horseshoe pitch, and the Salmon Arm campus of Okanagan College. The city's previous indoor ice arena, Memorial Arena, has been re-purposed as an indoor field sports facility, and is heavily used by such sports as soccer, rugby, and archery. Memorial Arena, with sponsorship from the Salmon Arm Savings & Credit Union has been re-branded as the SASCU Memorial Recreation Centre, while the main recreation centre is similarly sponsored and branded the SASCU Recreation Centre.

Former NHL player Dave Scatchard was raised in Salmon Arm, playing his minor hockey there. Other notable athletes raised in or with ties to Salmon Arm are swimmer Rick Say and curler Sandra Jenkins. 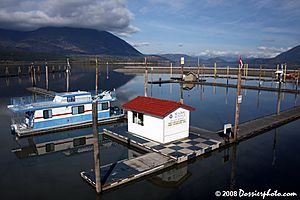 Salmon Arm lies on the Trans-Canada Highway approximately halfway between Vancouver and Calgary. It is also at the top of Highway 97, which leads to Vernon and Kelowna. The economy benefits from through traffic; many brand-name hotels and restaurants have opened in the past few decades.

The Canadian Pacific Railway also runs though Salmon Arm. No passenger service is available, though the Rocky Mountaineer trains pass through on occasion.

Salmon Arm is served by Greyhound Bus Lines for travel to other cities in the region, province and across Canada.

Salmon Arm has a minor, infrequent bus service to nearby suburbs, using small commuter minibuses, as well as handyDart service for the disabled.

In 1998, an area of 13,500 acres (34 km² or just over 5000 hectares) immediately southwest of Salmon Arm was burnt to the extent of deforestation by a wildfire started by lightning. The fire came down from the Fly Hills in the west and embers carried by the wind jumped the valley and ignited Mount Ida. Flames raced down both sides of the valley, threatening many homes. An emergency evacuation was executed as the fire hotfooted it closer. Remarkably, just as the fire reached the valley floor, a sudden change of wind direction forced the fire back on itself, extinguishing it. The fire came so close that trees in many backyards were singed and barn paint was peeled.

The media reported "20 homes and 15 barns" were destroyed during the firestorm in the Silver Creek area to the south of Salmon Arm, which also produced Canada's largest civil evacuation up to that date when the "5,000-hectare forest fire that forced the removal of 7,000 residents of Salmon Arm was being blown toward the town."

All content from Kiddle encyclopedia articles (including the article images and facts) can be freely used under Attribution-ShareAlike license, unless stated otherwise. Cite this article:
Salmon Arm Facts for Kids. Kiddle Encyclopedia.