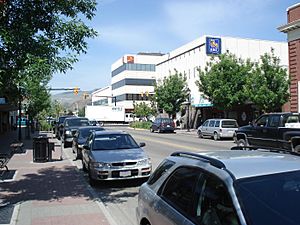 The downtown in Vernon.

Vernon is a Canadian city in British Columbia, Canada. Vernon is in the south-central region of British Columbia and is the largest city in the North Okanagan region. It is named after Forbes George Vernon, a former member of government in British Columbia. Including the areas around it, Vernon has a population of 58,584 as of the Canada 2011 Census. A person who lives in Vernon is called a "Vernonite".

Vernon was named one of the top six most desirable communities to retire to in North America by Consumer Reports in 2005. Vernon has a BCHL (British Columbia Hockey League) ice hockey team called the Vernon Vipers.

The site of the city was discovered by the Okanagan First Nations people, who named the community Nintle Moos Chin, which means "jumping over place where the creek narrows". This name refers to a section of the Swan Lake that passes through Downtown Vernon, the community's central business district. The Okanagan people settled around the city's two lakes, Okanagan Lake and Swan Lake, eating seasonal foods. Later, the land was renamed Priest's Valley because of the priests living in the valley around 1859. A town was created in 1885 and was named Vernon in 1887 in honour of Forbes George Vernon, a settler who became part of the British Columbian government.

Vernon started to develop in 1863, when gold was found in the surrounding lands. Centreville, the community's original business district, was formed in 1885. Vernon became an economic hub in the Okanagan because of its many cattle ranches and fruit orchard areas that attracted British families.

Vernon's growth quickened in 1891 after the Canadian Pacific Railway was opened in the Okanagan and Shuswap regions of British Columbia. Shortly after, the river boat S.S. Aberdeen was launched in 1893 to connect Vernon to other parts of the Okanagan. Fruit trees first grew in Vernon by the early 1890s, while water supplies were supplied to the community by canals by 1906. In 1908, the Okanagan Mounted Rifles military program was created, bringing a number of people to the area during World War I and World War II for lessons.

Vernon was incorporated as a city on December 30, 1892, with a city hall built in 1903 that included a fire hall and a public reading space. The following year, it was declared the largest municipality in the Okanagan and the first to contain a bank and telephone.

All content from Kiddle encyclopedia articles (including the article images and facts) can be freely used under Attribution-ShareAlike license, unless stated otherwise. Cite this article:
Vernon, British Columbia Facts for Kids. Kiddle Encyclopedia.