Penticton is a city in the Okanagan Valley of the Southern Interior of British Columbia, Canada, situated between Okanagan and Skaha Lakes. In 2006, its population was 31,909, while its census agglomeration population was 43,313.

The name Penticton is derived from a word in the Okanagan language. It is conventionally translated as "a place to stay forever" but is actually a reference to the year-round flow of Okanagan Lake through Penticton where it enters Skaha Lake. Differing accounts of the meaning are given in the British Columbia Geographical Names Information System entry for the city:

"Place where water passes beyond." (information from Isaac Harris, published in Vernon News, July 18, 1918); compare with: "Derived from the Okanagan dialect of the Salish tribe, the word Pen-tak-tin meaning 'a place of permanent abode where waters pass by'." (50th Anniversary booklet of Penticton, 1958)

From the Indian name Pente-hik-ton, "ever" or "forever", referring to the constant, steady flow of the Okanagan River out of the lake.... applied by the Indians to the locality at the outlet of the lake, meaning that the stream ran on ever, or forever, in contrast to other streams which dried up during the summer (6th Report of the Okanagan Historical Society); compare with: "Derives from the Okanagan word Sin-peen-tick-tin, loosely translatable as 'permanent place'." (c1980 advice from Randy Bouchard, BC Indian Language Project).

The site of the city was first settled by the Okanagan people, of the Interior Salish language group, who initially named the community Phthauntac, meaning the "ideal meeting place", followed by Penticton, meaning a "place to stay forever", or officially "a place where people live year-round" in the Okanagan language. They settled around the city's two lakes: Skaha Lake and Okanagan Lake; the former was originally known as Dog Lake. Their descendants are based at the Penticton Indian Band, a First Nations government part of the Okanagan Nation Alliance situated near Penticton.

In 1866, Irishman Thomas Ellis and his family traveled to Penticton, and became the first white settlers. He started to develop a community by building a cattle empire, and planting fruit trees. The Penticton Hotel was established in 1892 by Ellis, who positioned it around the local government area, and its first road: Front Street. The sidewalks on the street were made from wood, with coal oil lamps being introduced to the sidewalk. Ellis and his relatives retired in 1892, and sold a portion of their land to property dealers. Around this time, a number of European fur traders traveled through Penticton and the surrounding communities.

The sternwheeler S.S. Aberdeen, which began service on Okanagan Lake in 1892, meant that more services could be shipped to the area. A group of residents formed their own local public government board for the community, by 1907, in the hopes of promoting the area. It was referred to as the Board of Trade, who attempted to specialize in arts, commerce, education, and recreation. Another sternwheeler was launched that same year, the S.S. Okanagan, for use on Okanagan Lake, while other sternwheelers served Penticton and other communities on Skaha Lake.

Penticton was incorporated as a district municipality on December 31, 1908. Shortly after the district was incorporated, the fruit trees planted by Ellis, many of them apple trees, started to grow. Residents of the area packed fruit in boxes, so they could distribute it worldwide. In 1912, the Canadian Pacific Railway (CPR) developed the Incola Hotel for the city, which operated for approximately 70 years. 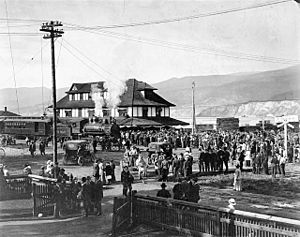 Headquarters of the Kettle Valley Railway were situated in Penticton.

During World War I, the S.S. Sicamous came to the community, while the Kettle Valley Railway train service began operating, by moving specific passengers. In 1949, Penticton purchased the ship from the Canadian Pacific Railway. The Penticton Regional Airport was developed during World War II due to wartime military air transportation concerns, which acted as an emergency landing strip until its tarmac was completed. Its land was expropriated from the Penticton Indian Band in 1949 under the War Measures Act.

In 1948, a provincial highway opened between Hope and Princeton, which allowed access to Penticton, and created competition for the Kettle Valley Railway; headquarters for the railway were chosen to be in Penticton, in 1910, but the location burnt down in 1964. Much of the railroad's original route has been converted to a multi-use recreational trail, known as the Kettle Valley Rail Trail, which carries the Trans-Canada Trail through this part of British Columbia. It was incorporated as a city on May 10, 1948, with the governor general of Canada declaring this. Reeve Robert Lyon served Penticton as the first mayor, while Lord Alexander was made a freeman of the city.

Penticton is home to recreational opportunities such as skiing at the Apex Mountain Resort ski area, boating and fishing on Skaha Lake and Okanagan Lake. There is golfing on the area's many courses, as well as hiking or biking the Kettle Valley Railway Trail, and rock climbing at Skaha Bluffs. Penticton is home to the BCHL hockey team Penticton Vees who play throughout the winter months, as well as the PCSL soccer team Penticton Pinnacles, who play from May until July.

In September 2006, residents voted 80.3% in favour of the construction of the South Okanagan Events Centre. The $73 million arena, sports complex and convention centre could possibly serve as a summer or early fall training facility for the Vancouver Canucks and is the home of the BCHL's Penticton Vees, so named in honour of the senior hockey team that in 1955 won the Ice Hockey World Championships against Russia. The Centre has boosted the city's convention market and is a popular stop on concert tours and for other special events.

The Penticton Art Gallery (formerly the Art Gallery of the South Okanagan) is a registered not-for-profit, charitable organization. Local and visiting artists show their works at the gallery. The PAG offers workshops and holds seasonal events. The During the winter holidays, there is an art under $300 event for gift giving accessibility.

Penticton is the hub of wine tourism in the Okanagan Valley with access to 120 wineries within an hour's drive. Nearby Naramata has 40 wineries at last count- by the beginning of the 2016 Fall Wine Festival.

The Kettle Valley Rail Trail, with trail heads leading to more than 160 km of flat, railbed trails for hiking and biking outings, can be accessed from Penticton. This trail is part of the Trans Canada Trail. Penticton has finished the building of the Penticton Aquatic Centre 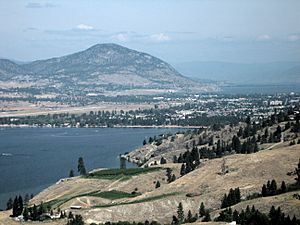 An aerial view of Penticton; Skaha Lake can be seen in the foreground, while Okanagan Lake is visible in the background. Penticton Regional Airport's runway can also be seen. 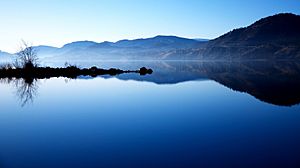 Skaha Lake sits along the Okanagan River near Penticton.

Penticton is the largest city by area and population in the Okanagan-Similkameen Regional District, which is part of the Okanagan as a whole, for which the city is the third largest in the region. It is the 21st largest settlement in British Columbia itself by population, while its metropolitan area, including the city plus Okanagan-Similkameen Electoral Area D, serves as the 71st largest in Canada; by area, Penticton ranks 20th in its province; statistics are based on the Canada 2011 Census. It lies at the south bottom of Okanagan Lake, and north beginning of Skaha Lake. Between Okanagan Lake and Skaha Lake are a number of residential areas, farms, which grow orchard and wine products.

Pine and fir are commonly found in the mountains and high country around Penticton, which include the Okanagan Highland, and to its east, the Monashee Mountains. Apex Mountain Resort, which sits 33 kilometres (21 mi) west of the city on the Thompson Plateau, is home to the tallest mountain peak in the Penticton area; ski services are offered. The Okanagan Highland is an intermediary plateau-like hilly country between the Okanagan Valley and the Monashee Mountains. 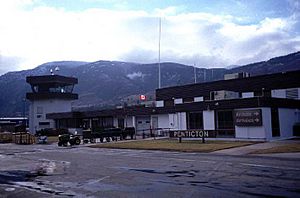 The local and upcoming weather of the city is observed at the Penticton Regional Airport.

Penticton has a semi-arid climate (BSk) with low precipitation, hot summer days with cool nights, and moderately cool, mostly cloudy winters. With 346.0 mm (13.62 in) of annual precipitation, Penticton is the fourth driest city in Canada. It averages 58.7 cm (23.1 in) of snowfall per year.

The high daytime temperatures throughout the summer means that Penticton has on average the second most number of days in a year over 30 °C (86.0 °F) (after Kamloops) and the city has the lowest amount of fog in Canada. Penticton experiences 1,923 sunshine hours annually, lower than one might expect in a dry climate. This is the result of temperature inversions during the winter that leave a layer of cloud cover at the top of the valley where warm moist air collides with the cooler dry air that fills the valley. During December and January, Penticton is one of the cloudiest places in Canada. By contrast, the summer months are some of the most cloud-free in Canada. Overall the sun shines for 39 percent of daylight hours, varying between a low of 13 percent in December and January to 63 percent in August.

Mean relative humidity hovers between 63–77 percent in the morning throughout the year, but afternoon mean relative humidity is more uneven, ranging from 36 percent in July to 69 percent in January and December. The local and upcoming weather of Penticton is observed at the Penticton Regional Airport by Environment Canada. It typically experiences four distinct seasons annually, having hot summers, relatively mild winters, and little snow, according to the British Columbia government based on statistics from Environment Canada. Despite having a mild winter, Penticton often sees moderate stretches of below freezing weather, typically confined to December and January. 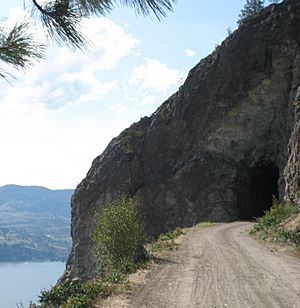 The Kettle Valley Railway runs through Penticton, and the nearby city Kelowna.

The larger metropolitan area contains the Okanagan Falls Provincial Park, located in the unincorporated community Okanagan Falls. Penticton maintains a policy on dogs that are allowed at parks or beaches. Other public spaces include trails, such as part of the Trans Canada Trail, and Kettle Valley Railway; the former was formed throughout Canada, while the latter runs through Penticton and nearby city Kelowna. Rock climbing area Skaha Bluffs is located south of city centre on a hillside above the Skaha Lake in the Skaha Bluffs Provincial Park. It is the second most popular rock climbing area in British Columbia, after the Smoke Bluffs in Squamish.

In early 1975, residents of the Penticton area traveled to Japan, in order to search for business opportunities. They met Kaneyasa Marutani, the mayor of Ikeda, Hokkaido, a town in the Nakagawa regional district of Japan. He claimed that the town was proposing a sister city relationship, and stated that Penticton was a reasonable option, due to its similarities with winery production, cattle industry, and geographic features. Later that year, residents of the Ikeda area toured Penticton and met with the government of Penticton, reaching a decision to become a sister city in 1977.

Since 1977, Penticton has served as a sister city of Ikeda. The relationship is one of the oldest in Canada, with a number of residents having exchanged visits to the respective locations annually. In 1993, there was consideration for building a Japanese garden in Penticton, in order to honor their agreement, with the garden's construction beginning in 1997. It is known as the Penticton–Ikeda Japanese Garden.

All content from Kiddle encyclopedia articles (including the article images and facts) can be freely used under Attribution-ShareAlike license, unless stated otherwise. Cite this article:
Penticton Facts for Kids. Kiddle Encyclopedia.