Science Museum of Minnesota is an American museum focused on topics in technology, natural history, physical science, and mathematics education. Founded in 1907 and located in Saint Paul, Minnesota, the 501(c)(3) nonprofit institution is staffed by over 600 employees and over 1,600 volunteers. The museum's mission statement is to "Turn on the science: Inspire learning. Inform policy. Improve lives."

The museum was formed during a luncheon in 1906 when Charles W. Ames, a prominent businessman, met with a group and discussed "the intellectual and scientific growth of St. Paul". The museum, originally named the St. Paul Institute of Science and Letters, was first located at the St. Paul Auditorium on Fourth Street. In 1909, the St. Paul School of Fine Arts (now known as the Minnesota Museum of American Art) briefly merged with St. Paul Institute.

In 1927 the museum moved to Merriam Mansion on Capitol Hill, the former home of Col. John Merriam. This move provided more storage space for exhibits. As the Science Museum continued to outgrow its facilities, it moved to the St. Paul-Ramsey Arts and Sciences Center at 30 East Tenth Street in 1964. In 1978, this expanded across a skyway into a new space on Wabasha between 10th and Exchange, greatly increasing exhibit space and adding an IMAX Dome (OMNIMAX) cinema.

In the early 1990s, plans for a new and more modern facility, to be located adjacent to the Mississippi River, were formed. With aid from public funding initiatives, the new museum broke ground on May 1, 1997 and opened on December 11, 1999. During the move, 1.75 million artifacts were transported. 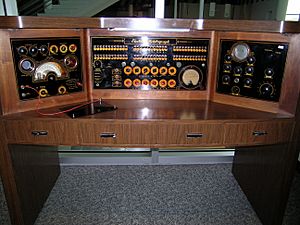 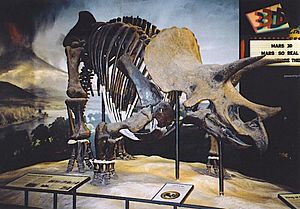 The Triceratops, a composite mount of two animals nicknamed "Fafnir"

There are a number of exhibits that are always in the museum, including:

The new building has a dual-screen IMAX/Omnimax theater with both a wall screen, for IMAX films and other flat presentations, and a rotatable dome, for viewing Omnitheater films, the first such convertible theater in the northern hemisphere. The counterweights for the system were so massive that they had to be put in place before the rest of the building. The theater boasts "the largest permanently installed electronic cinema projector in the world", an advanced computer system to coordinate the theater's facilities, and a complex sound system to accommodate both viewing formats, according to the website.

The museum has been a leading producer of Omnitheater films, with ten to its credit so far:

The theater was closed for a brief time in early 2014 to repair a leaky roof.

The museum houses a collection of over 1.7 million artifacts and objects in its vault, ranging from dinosaur and other animal remains and fossils, preserved animals and plants, and cultural artifacts from extinct and extant civilizations. The collections division maintains a staff of scientists and researchers including paleontologists, archaeologists, ecologists, biologists, ethnologists, and archivists. Researchers visit the vault to take advantage of the unique collection, but it is not open to regular museum visitors.

The museum is associated with the Lee and Rose Warner Nature Center, which is located approximately 30 miles (48 km) offsite in Washington County. The center provides natural history education opportunities for all ages on over 600 acres (2.4 km2) of lakes, bogs, woodlands, and grasslands.

The Kitty Andersen Youth Science Center (KAYSC) is an informal learning environment for young people between 11 and 18 years old. The mission of the KAYSC is to "empower youth to change our world through science". Although there are some volunteers in the KAYSC who are too young for jobs, most of the teens in the KAYSC are actual museum employees, engaging in activities ranging from staffing the Cell Lab on the museum floor to engaging in community activism around urban agriculture and climate change. The teens are guided and mentored in science, technology, work, and life skills by the adult staff.

The Science Museum of Minnesota is a founding member of NISE Net and participates in NanoDays.

The museum also has an extensive science learning division. In addition to many on-site youth and family classes, day camps, and summer camps, museum programs are also hosted at various schools throughout the region. Day classes and summer camps often involve science, technology, nature, and art themes. Overnight camp-ins let large groups sleep on the exhibit floor and have time to explore the galleries and view an Omnitheater film as a group. The museum is also one of the leading professional development resources for teachers in the state.

All content from Kiddle encyclopedia articles (including the article images and facts) can be freely used under Attribution-ShareAlike license, unless stated otherwise. Cite this article:
Science Museum of Minnesota Facts for Kids. Kiddle Encyclopedia.