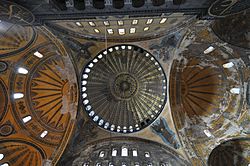 A semi-dome(also called a "half-dome") is the term in architecture for half a dome. It is used to cover a semi-circular area, usually an apse. A semi-dome was often used at each end of a barrel vaulted ceiling.

An early use was to cover Roman cult images. They are a feature found in Ancient Roman and traditional church architecture. The semi-dome is featured in Byzantine architecture and Early Christian architecture. They are prominent in mosques and iwans in Islamic architecture. Some mosques featured semi-domes decorated with glass mosaics. In the second half of the 6th century Ottoman architecture began using half-domes combined with domes. Semi-domes were common in Roman baths, palaces and large buildings. During the Dark Ages in Britain whenever an apse was built, a semi-dome covered it. In 11th century Normandy every apse of every church had a semi-dome over it. The semi-dome went out of use when the east end of churches were squared.

All content from Kiddle encyclopedia articles (including the article images and facts) can be freely used under Attribution-ShareAlike license, unless stated otherwise. Cite this article:
Semi-dome Facts for Kids. Kiddle Encyclopedia.