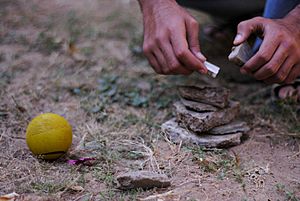 Seven stones (also known by various other names) is a game from the Indian subcontinent involving a ball and a pile of flat stones, generally played between two teams in a large outdoor area. It is played today in villages.

A member of one team (the seekers) throws a ball at a pile of stones to knock them over. The seekers then try to restore the pile of stones while staying safe from the opposing team's (the hitters’) throws. The hitters' objective is to hit the seekers with the ball before they can reconstruct the stone pile. If the ball touches a seeker, that seeker is out and the team the seeker came from continues, without the seeker. A seeker can always safeguard themselves by touching an opposite team member before the ball hits the seeker. 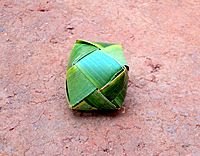 In other parts of India, the same game is known several other names:

Similar to India, the game is identified differently in various countries, but the spirit of the sport remains the same.

Not very long ago, kids all around the country would come together on a field to play from a plethora of outdoor games. While football and cricket were the most commonly played games, ancient and traditional Indian were also played like Kabaddi, Kho-Kho, and Gilli Danda.

As time passed by, most of these traditional games began to fade away and very few remained. Kabaddi, for example, became a global phenomenon after being pushed with the Pro Kabaddi League. A game that no kid talked about 7 years ago, is now being enthusiastically watched and played by almost every child of this generation. Fortunately, Kabaddi is not the only traditional sport who gained international popularity. Lagori, which was played a lot by the youth back in the day, has also begun to make its way to the international circuit.

Today, Lagori is played by at least 30 nations across the world. The game has gradually gained a considerable amount of global prominence. However, India is the epicentre of the development of the game on with a bigger platform and a wide outreach to contemporary audience. The Indian Lagori Premier League that was held in November 2017 had gathered great momentum across the nation which was organised by the Amateur Lagori Federation of India. They have also made efforts to push the game to several states of India as well as in other countries, playing a pivotal role in popularising the game. The second Lagori World Cup (first being played in 2015) is soon going to take place later this year, several nations including Indian, Bhutan Hong Kong, Brazil, Turket, Sri Lanka, Bangladesh, and Nepal will go face to face.

The rules have not changed that much over the years, however there have been some changes brought in the way the game is being played. The following fundamentals were laid down by the International Lagori Foundation: Each team would have 12 players, with only 6 players on the court for every set. One set lasts for 3 minutes followed by a half minute break in between sets. One match has typically 3 sets and the team scoring maximum points wins. Other than that, the rules are basically the same for all leagues. Having said that, the game has definitely come a long way from what it was. From a dusty open field to an indoor synthetic turf, from a pile of stones lying around in the field to 7 circular fibre discs made for the game, and from an old tennis ball to a softball specifically tailored for the game.

Despite the game almost being forgotten and becoming extinct in the past few decades, the inaugural World Cup help in 2015 was a huge success paired with the Indian Lagori Premiere League (ILPL) catering to a wide audience in the country, it seems as though Lagori is going through its revival phase.

All content from Kiddle encyclopedia articles (including the article images and facts) can be freely used under Attribution-ShareAlike license, unless stated otherwise. Cite this article:
Seven stones Facts for Kids. Kiddle Encyclopedia.