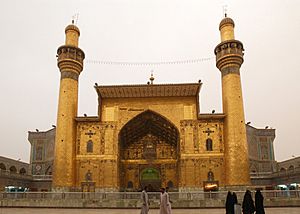 Shi'a Islam (Arabic: شيعة, Persian: شیعه) is the second largest denomination in Islam. Shia Muslims believe that Ali is the first Caliph (or Successor) who had been chosen by last prophet Muhammad by the order of God. Muhammad declared Ali as a first Caliph (or Imam) in his last sermon of last Haj at Ghadeer. Shi'a Muslims believe in the teachings of Qu'ran and the Prophet Muhammad's family, whom they call the Ahl al-Bayt. The Shi'as think that the first three ruling Sunni Caliphs had no importance to the development of the faith. The singular/adjective form is Shī'ī (شيعي) and means a follower of the Household of Muhammad and of Ali ibn Abi Talib (Imam Ali).

Shi'a Islam, like Sunni Islam, has at times been divided into many branches, however only three of these have a significant number of followers nowadays. The best known and the one with most adherents is Twelvers (Ithnāˤashariyya), followed by the Ismaili and Zaidiyyah.

All content from Kiddle encyclopedia articles (including the article images and facts) can be freely used under Attribution-ShareAlike license, unless stated otherwise. Cite this article:
Shia Islam Facts for Kids. Kiddle Encyclopedia.