Shirebrook is a town in the Bolsover district of north-east Derbyshire on the border with Nottinghamshire, England. it had a population of 13,300 in 2011, reducing to 9,760 at the 2011 Census. It is on the B6407, and close to the A632 road, between Mansfield and Bolsover. The town has been coined 'Little Poland' by the town's residents.

The town is served by Shirebrook railway station, on the Robin Hood Line.

Area Summary Shirebrook and Pleasley division in the east of Bolsover covers the parishes of Shirebrook and Pleasley. The towns of the same name make up most of the urban nature of the division, split by the more semi-rural area in the centre. In 2012, Shirebrook and Pleasley had a population of 13,300 and a population density almost three times that of Derbyshire as a whole. Whilst the area has a younger age profile than the county as a whole, with a higher proportion of people aged 16–24 years, it has a higher than average percentage of lone pensioner households. The division is the most deprived areas of the county, with higher than average levels of child poverty and children eligible for free school meals. The division's unemployment rate has halved in the past year, but it continues to have a higher rate of out-of-work benefit claimants and a lower proportion of economically active residents than elsewhere in the county. Educational attainment levels in the area are low. Although attainment at GCSE level is slightly above the county average, attainment at foundation stage is amongst the lowest in the county and there is a significantly higher proportion of adults without qualifications. Absenteeism at both primary and secondary level is significantly higher than the county averages. Life expectancy in Shirebrook and Pleasley is low and a significantly higher than average proportion of people have their day-to-day activities limited by a health problem or disability. Mortality rates are considerably higher than average, with early deaths from cancer being particularly prevalent. However, the area performs better than Derbyshire overall on the rate of alcohol related hospital admissions for all ages. 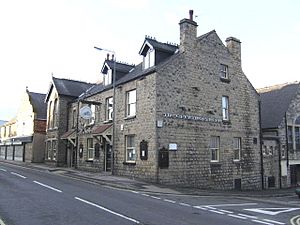 The Great Northern former-pub, once a frequent social point in Shirebrook

All content from Kiddle encyclopedia articles (including the article images and facts) can be freely used under Attribution-ShareAlike license, unless stated otherwise. Cite this article:
Shirebrook Facts for Kids. Kiddle Encyclopedia.