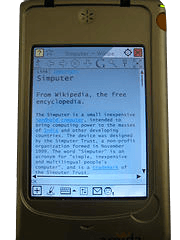 The Simputer is a small, cheap device, similar to personal digital assistant (palmtop). The unique feature of this device is a smart-card interface which allows a single Simputer to be used by many users. User's private datas might be kept on a cheap smart-card. This device was constructed by Indian company- Simputer Trust. The name stands for "Simple computer".

The Simputer project was invented during the organization of the Global Village, an International Seminar on Information Technology for Developing Countries. It was conducted in October 1998. The discussion was about big need for a low-cost mass access device which will bring local-language IT to the masses. During inventing a name for new established original device, the purpose was to find complex acronym to fit the name Simputer. Thus Simputer is a Simple, Inexpensive, Multi-lingual comPUTER. Later it was expanded to Simple, Inexpensive Multi-lingual People's compUTER. Now it is also called "computer for the masses".

It is architecturally similar to the Linux Advanced Radio Terminal and the Intel StrongARM reference platform. It has processor Intel StrongARM 200+ MHz, 64MB of RAM, 32MB Flash ROM and may use cheap smart-cards with capacity 8KB. It has also USB connectivity and software modem so might be connect to the internet. 320x240 LCD interface in Simputer is with a touch panel overlay on liquid-crystal display. Operating system runs on a version of the Linux Kernel (computer science). Type of the software used in Simputer is text-to-speech. This tool may use speakers and microphone because it has special jacks. It has also built-in Infrared Data Association (IrDA) port. The device is powered by 3 AAA sized NiMH batteries.

The Simputer Trust has licensed to manufacturers to produce devices based on the Simputer. These companies are: PicoPeta Simputers and Encore Technologies.

The tool developed is very generic and has similarities to many other countries. It is ideally suited for developing and under developed countries like: India, Tajikistan, Mauritius, Mongolia, Ghana, Uzbekistan, Sri Lanka, Bhutan, Thailand or Vietnam.

All content from Kiddle encyclopedia articles (including the article images and facts) can be freely used under Attribution-ShareAlike license, unless stated otherwise. Cite this article:
Simputer Facts for Kids. Kiddle Encyclopedia.