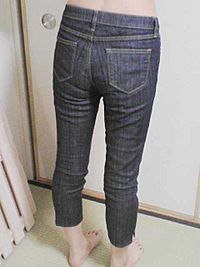 Slim-fit pants or skinny jeans (when made of denim) have a snug fit through the legs and end in a small leg opening that can be anywhere from 9" to 20" in circumference, depending on size. Other names for this style include drainpipes, stovepipes, tight pants, cigarette pants, skinny jeans, pencil pants, skinny pants, gas pipes, and skinnies. Skinny jeans taper completely at the bottom of the leg, whereas drainpipe jeans are skinny but then the lower leg is straight instead of tapering and so they are often slightly baggier at the bottom of the leg than skinny jeans. In some styles, zippers are needed at the bottom of the leg to facilitate pulling them over the feet. Stretch denim, with anywhere from 2% to 4% spandex, may be used to allow jeans to have a super-slim fit. Skinny jeans come in a variety of colors and styles. 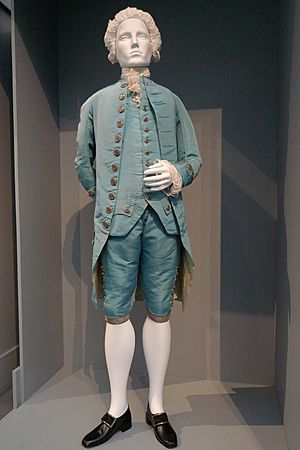 Tight fitting breeches, as worn during the 17th and 18th centuries as part of the three piece suit

Before the 18th century, European men wore breeches and hose. In Tudor times, these breeches were loose-fitting, but by the 1660s, tight breeches were fashionable. These were popularised by Frenchmen at the court of Louis XIII, as part of the three piece suit that also included a type of frock coat called a Justacorps, a tricorne hat, a powdered wig, and a long waistcoat. During the Restoration era, the tighter breeches were introduced to England, and the rest of Europe, because the cut was deemed more flattering to the leg.

From the 16th until the 19th century, the Mughlai nobility attired themselves in tight-fitting Churidars which were worn tied below the knee. These trousers, and other elements of traditional clothing like the Shalwar Kameez, were often worn by Englishmen working in India, especially officers of the East India Trading Company. 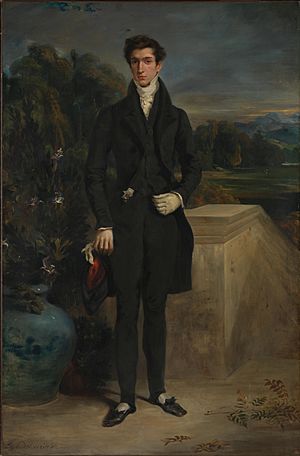 Tight fitting trousers were fashionable from 1805 until 1850, being descended from the loose work trousers worn as a political statement by Sans-Culottes during the French Revolution. These "pantaloons," popularised by Regency era Englishmen like Beau Brummel, were worn high on the waist and tailored to accentuate the leg like the breeches previously fashionable among the upper class. Pantaloons were tied (or buttoned) around the ankle and commonly put into boots.

Pants, which had come to mean tight-fitting trousers, but now just a synonym, fitted more loosely from the 1840s onwards as mass-production replaced tailoring. Beginning in the Edwardian era and continuing into the 1920s, baggy "Oxford" or "collegiate" trousers and plus fours were fashionable among the younger generation. As the name suggests, Oxford bags originated at the UK's elite universities, where young upper class men pursued an active, sports-centred lifestyle. 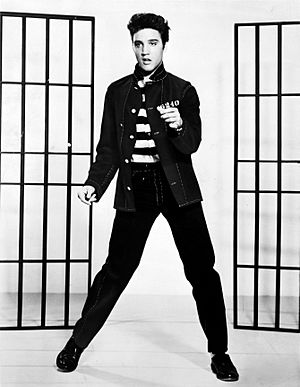 Elvis Presley wearing drainpipe jeans. In the 1950s, the waist was higher than on modern skinny jeans.

Drainpipe trousers re-emerged in the 1950s, with popular Western stars such as the singing cowboy Roy Rogers, The Lone Ranger, The Cisco Kid, Zorro and Gene Autry and actresses Marilyn Monroe and Sandra Dee wearing their pants very slim to the ankle from 1955 onwards. Tapered jeans became most notable with country music stars and with the birth of rock and roll in the 1950s, when Elvis Presley donned slim-fitting jeans and shocked the country.

In the early 1960s, drainpipes were worn by numerous rock bands and musicians, including The Beatles, The Rolling Stones and Bob Dylan. Fashion icon Audrey Hepburn also raised the popularity of drainpipe jeans. Slim fitting pants and jeans were worn not just by members of the teenage Mod or greaser subculture but also ordinary people. By 1962, Sears were selling tight jeans made from "stretch" denim that incorporated elastane. The trend lasted until the end of the 1960s when "hippie" culture gave rise to flared pants and bell bottom jeans.

In the early 1970s, glam rock and rockabilly bands reviving the Teddy Boy look popularised drainpipe jeans in contrast to the flared trousers worn by hippies. Red tartan drainpipe jeans (as they were then called) were popular in the punk subculture of the late 1970s, and were worn by many bands and scene leaders such as Ramones, The Clash and Sex Pistols. 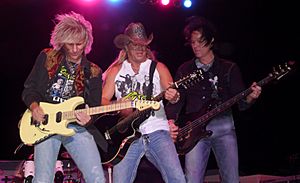 Skin-tight acid-washed jeans were also popular in the 1980s with most heavy metal bands, and in particular those in the thrash metal scene, such as Anthrax, Megadeth, Metallica and Slayer. This was the trend for those who did not wear spandex, which was popular with the dominant heavy metal scene at the time. They were often worn with white high-top sneakers or basketball shoes like Converse. By the late 1980s, drainpipe pants were largely superseded by straight leg jeans like Levi 501s, but remained popular among fans of hard rock until the 1990s. Tight fitting jeans were also worn by pop stars like Michael Jackson and Freddie Mercury.

By the early 1990s, many glam metal bands such as Poison, Mötley Crüe, Kiss, Bon Jovi, and Slaughter, abandoned spandex and wore form fitted jeans. Tight jeans were also worn by members of the casual subculture from the late 80s until the mid 90s, including Ewan McGregor in Trainspotting. However, with the rise of grunge and hip-hop music in the mid 1990s and the post thrash movement, drainpipe jeans quickly went out of fashion in favor of baggy carpenter jeans, as worn by hip-hop/rap acts such as Kris Kross, Another Bad Creation, and Snoop Dogg. Flared jeans also made a comeback from the mid-1990s onward, furthering the move away from the drainpipe styles. 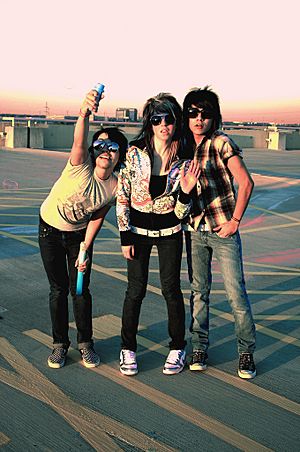 The 2000s saw the continued rejection of slim-fitting pants and jeans throughout the early and middle years in mainstream fashion. However, in 2005, fitted pants were reintroduced to the mainstream market for women. This new style of pants was called "skinny jeans". During its first year, skinny jeans were only sold online, and they were not available in stores. Initially, they were not well received by the public, though there were some early adopters. It was not until 2006 that skinny jeans gained more steam in fashion world, and by this time skinny jeans were being sold at shopping malls. Throughout 2007 skinny jeans received more mainstream exposure as fashion trends started moving away from the bell bottoms and baggy pants which had been dominant for the previous 10 years. Men's skinny jeans were introduced in 2008 and became the norm by 2009.

Skinny jeans first spread to men's fashion in 2008. This has continued into the 2010s, entering the mainstream fashion in 2011. Since then, they have remained popular and eventually became one of the decade's defining fashion pieces for both men and women. They have become so popular that many men have expanded their wardrobe to include tight fitting chino trousers coming with variety of colors, but often in khaki, brown or white.

In Europe, skinny jeans for boys and men have a loose waist to appear "baggy" at the top but skinny on the legs.

All content from Kiddle encyclopedia articles (including the article images and facts) can be freely used under Attribution-ShareAlike license, unless stated otherwise. Cite this article:
Slim-fit pants Facts for Kids. Kiddle Encyclopedia.