South Witham is a village and civil parish in the South Kesteven district of Lincolnshire, England. The population of the civil parish at the 2011 census was 1,533. It is situated 10 miles (16 km) south of Grantham, 10 miles east of Melton Mowbray and 10 miles (16 km) north of Oakham. The village is close to the Leicestershire and Rutland borders.

The village takes its name from the River Witham which rises nearby. But the origin of the word Witham is still unknown. The village has until recently also been spelt as "South Wytham".

In 1966, the Royal Air Force built a large housing estate on the opposite side of the River Witham. The houses were intended for servicemen at RAF Cottesmore, but were taken instead by personnel at RAF North Luffenham. The village trebled in size virtually overnight, and the primary school was similarly increased in size. A NAAFI was provided for the forces' families.

On 2 August 1973, Canberra B2 WJ674 of 231 OCU crashed in the field east of The Fox public house, near Woodbine Farm in North Witham parish. Two of the aircrew ejected successfully, Flt.Lt. T.M.Murray (Nav), survived, but the pilot, Flt. Lt. D.J.Dennis, was killed.

In 2010 a plan for a super-dairy with almost 3,000 cows was withdrawn after concerns expressed by residents.

South Witham is bisected by the River Witham, about 3 miles (4.8 km) to the east of its source. It is the point on the A1 where it enters Lincolnshire from the south, near The Fox Inn. The parish of 1,770 acres (7 km2) acres borders Thistleton and Rutland to the south, and the boundary to the west meets Wymondham, Leicestershire at Thistleton Gap. The parish includes the Forty Acre Wood to the north-west, where it borders Gunby. The boundary goes due east to meet North Witham parish at the first undulation in the road northwards. 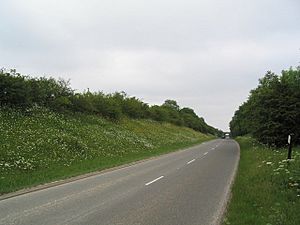 Crossing the road, the boundary goes due eastwards to meet the A1, which it then follows due south on the east side of the road. The boundary goes through The Fox, with North Witham parish to the east, to a point just south of the A1 interchange. The A1 was upgraded in early August 1971, through Rutland, to Tickencote (built by Rutland County Council). Before the road was improved, the South Witham crossroads on the A1 lay at the point where the sliproads join today. 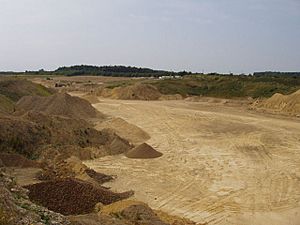 Nearby to the south was RAF Cottesmore, and the village was the centre of the flight path circuit. 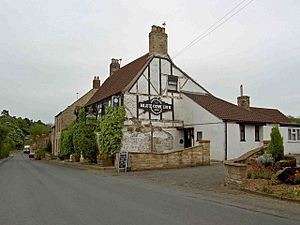 On the road to Wymondham is a limestone quarry owned by Breedon Aggregates, containing around 3.2 million tonnes of limestone. Ennstone Johnston bought the quarry for £1.5 million in April 2004 from GRS. Close by to the north is a former ironstone quarry. Other companies based in the village include Compressed Air Plant, Auriga, Petlife International and Clever Cooks. In the parish on the northbound A1 is the Grantham South Witham Travelodge. One village public house is the Blue Cow in the High Street and the other is The Angel near the village church

There was once a South Witham railway station which is now closed. The line went from Melton, via Bourne, to Spalding. In 1898 a branch line was built from the railway (near to the quarry) to Buckminster to transport iron ore for the Holwell Iron Company, later the Appleby-Frodingham Steel Company, and ran parallel to Sewstern Lane.

The church is dedicated to St John the Baptist and included in the Withams Group of Churches of North Witham, Stainby and Gunby. In the 19th century the vicar was Ralph Tollemache, nephew of Lord Frederick Tollemache. He built the primary school in 1879. His eldest son, Sir Lyonel Felix Carteret Eugene Tollemache, 4th Baronet born in 1854, became Lord Tollemache in 1935.

There were two chapels - a Methodist and Congregationalist (now known nationally as the United Reformed Church). One chapel on Thistleton Road became a vintage motorcycle museum. The owner later claimed to be Britain's safest driver, having taken to the wheel in 1925 (at the age of 15), and buying his first car, a Willys Overland Crossley Whippet in 1935 for £2.50. He sold his collection of eighty 1920s and 1930s motorcycles in March 2003. 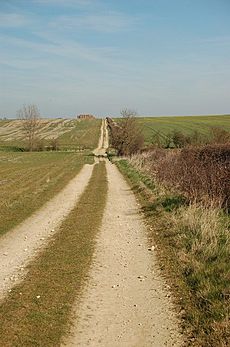 View up to the A1 near Temple Hill

The parish is one of Lincolnshire's Knights Templar preceptories. Temple Hill was investigated by the Society for Medieval Archaeology in 2002.

Until their disbandment in 1312, the Knights Templar were major landowners on the higher lands of Lincolnshire, where they had a number of preceptories on property which provided income, while Temple Bruer was an estate on the Lincoln Heath, believed to have been used also for military training. The preceptories from which the Lincolnshire properties were managed were:

The village focuses on two centres: around the church and around the former MOD housing estate.

The ecclesiastical parish South Witham is part of the Witham Group of the Deanery of Beltisloe in the Diocese of Lincoln. The incumbent is the Revd Dr Tom Broadbent.

The village primary school is in Water Lane. The school's 2011 Ofsted rating was Grade 2 (good). Older children are bussed out of the village to school.

The village magazine, Witham Word, is published monthly on the web.

The village is the terminus of the No. 28 bus route from Grantham, which provides a daily service.

All content from Kiddle encyclopedia articles (including the article images and facts) can be freely used under Attribution-ShareAlike license, unless stated otherwise. Cite this article:
South Witham Facts for Kids. Kiddle Encyclopedia.