The Speed Art Museum, originally known as the J.B. Speed Memorial Museum, now colloquially referred to as the Speed by locals, is the oldest, largest, and foremost museum of art in Kentucky. It is located in Louisville, Kentucky on Third Street next to the University of Louisville Belknap campus and receives around 180,000 visits annually.

The museum offers visitors a variety of "art experiences" outside its collection and international exhibitions, including the Speed Concert Series, the Art Sparks Interactive Family Gallery, and the popular late-night event, After Hours at the Speed.

The Speed houses ancient, classical, and modern art from around the world. The focus of the collection is Western art, from antiquity to the present day. Holdings of paintings from the Netherlands, French and Italian works, and contemporary art are particularly strong, with sculpture prominent throughout.

The museum was built in 1927 by Arthur Loomis in the Neo-Classical style. Loomis was already well known in Louisville for landmarks like the Louisville Medical College and Levy Brothers. The original building was designed as an understated Beaux-Arts limestone facade. Hattie Bishop Speed established the museum in memorial of her husband James Breckenridge Speed, a prominent Louisville businessman, art collector, and philanthropist. Ms. Speed set up the endowment to fund the museum, encouraging the museum to never charge admission.

The museum underwent a $60 million expansion and renovation project from September 2012 to March 2016, designed by architect Kulapat Yantrasast of wHY architecture. During the closure, the museum opened Local Speed, a satellite space in Louisville's East Market District (NuLu) for rotating exhibitions, programs and events. Local Speed is located at 822 East Market Street.

1928 – The centenary of Kentucky portrait painter Matthew Harris Jouett is celebrated with a major exhibition of his portraits, many owned by prominent Louisvillians.

1933 – The museum is incorporated as a privately endowed institution and its board of governors was established.

1934 – The museum received its first major donation, a valuable collection of North American Indian artifacts given by Dr. Frederick Weygold.

1941 – Dr. Preston Pope Satterwhite makes a significant gift to the museum – his collection of 15th century and 16th century French and Italian Decorative Arts including tapestries and furniture.

1944 – Satterwhite donates the English Renaissance room, which was moved in its entirety from Devon, England. Dr. Satterwhite's gift necessitated an enlargement of the museum and in his will he provided for the addition that bears his name. Completed in 1954, it was the first of three additions to the original building.

1946 – Paul S. Harris becomes the first professional director of the museum. During his tenure, acquisitions to the collection were made mostly in the areas of decorative arts and furniture.

1966 – Charter Collectors Group forms to assist museum in the acquisition of pre-1940 art.

1973 – The North Wing of the museum opens, giving new space for a theatre, offices, indoor sculpture court, and library.

1977 – The Speed celebrates its 50th anniversary in 1977 with the acquisition of Rembrandt's Portrait of a Woman, one of the museum's most significant acquisitions.

1996 – Mrs. Alice Speed Stoll dies, leaving behind an estate that bequeaths over $50 million to the museum. The Speed closes to undertake an extensive renovation and renaissance. Newer lighting, heating and cooling systems, bold wall colors, multi-layered labels about the collection, and the Laramie L. Learning Center, Art Sparks Interactive Family Gallery are put into place.

2012 – The museum begins another major transition with a $60 million expansion project that will create a space for larger special exhibitions, new contemporary art galleries, a family education welcome center, 150-seat cinema, indoor/outdoor café, museum shop, and a multi-functional pavilion for performances, lectures and entertaining. The museum is closed to the public for three years during the construction period.

Highlights of the Speed's collection

Highlights of the collection include works by: 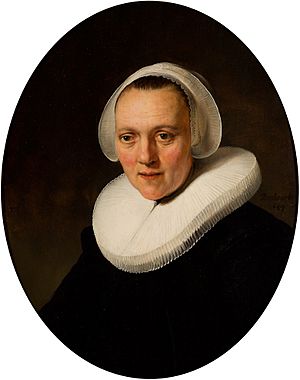 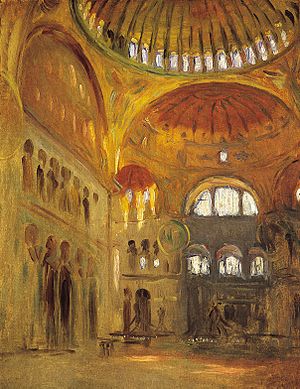 All content from Kiddle encyclopedia articles (including the article images and facts) can be freely used under Attribution-ShareAlike license, unless stated otherwise. Cite this article:
Speed Art Museum Facts for Kids. Kiddle Encyclopedia.