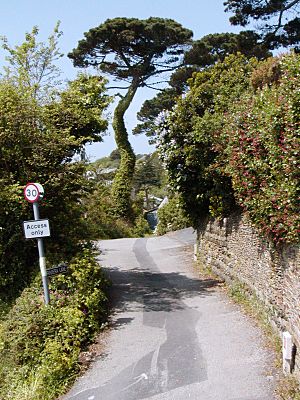 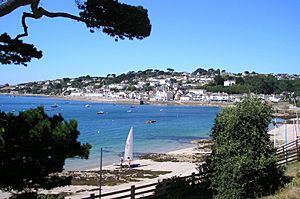 St Mawes (Cornish: Lannvowsedh) is a small village opposite Falmouth, on the Roseland Peninsula on the south coast of Cornwall, United Kingdom. It lies on the east bank of the Carrick Roads, a large waterway created after the Ice Age from an ancient valley which flooded as the melt waters caused the sea level to rise dramatically. The immense natural harbour created is often claimed to be the third largest in the world. It was once a busy fishing port, but the trade declined during the 20th century and it now serves as a popular tourist location, with many properties in the village functioning as holiday accommodation. The village is in the civil parish of St Just in Roseland.

The town takes its name from the Celtic saint Saint Maudez (Mawe), who may have come from Ireland but is mainly venerated in Brittany. A name: 'Musidum' in Roman times, has subsequently been applied to St. Mawes, although the source is dubious.

St Mawes lies within the Cornwall Area of Outstanding Natural Beauty (AONB). Almost a third of Cornwall has AONB designation, with the same status and protection as a National Park.

St Mawes Castle is a well-preserved coastal fortress from the time of Henry VIII, built to counter the invasion threat from the Continent. Charles Henderson, writing in 1925, says of St Mawes, "an ancient fishing town which in late years has assumed the different and more sophisticated character of a watering place". The seal of St Mawes was Az. a bend lozengy Or between a tower in the sinister chief Arg. and a ship with three masts the sail furled in the dexter base of the second, with the legend "Commune Sigillum Burgi de St. Mawes al Mauditt. 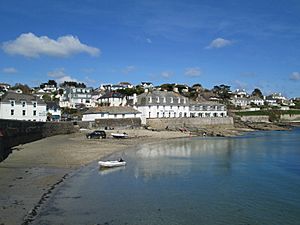 There have been frequent private visits to St Mawes by members of the Royal Family including HM Queen Elizabeth the Queen Mother, HRH Princess Margaret and more recently the Duke (Prince Charles) and Duchess of Cornwall who ended their stay in July 2008 by naming the new St Mawes ferry The Duchess of Cornwall. HM The Queen visited St Mawes in 1977 during her Silver Jubilee Tour. In June 2002 for The Queen's Golden Jubilee and, with a brand new cast in June 2012 for the Diamond Jubilee, The Queen's Coronation was re-enacted in great detail by the young people of the village in a ceremony entitled "The Children's Coronation".

The name of the town comes from Saint Maudez, a Breton saint, and there was a chapel here dedicated to him with his holy well nearby. Its existence in 1427 is mentioned in George Oliver's Monasticon and it remained in use until the reign of Elizabeth I when it was abandoned. From that time until ca 1838 there was no chapel for the townspeople until a private chapel built in 1807 by the Marquis of Buckingham was licensed by the Bishop. This was on a different site and was rebuilt in 1881. St Mawes continued however to be in the parish of St Just in Roseland. St Mawes' Church, St Mawes was opened in 1884.

The Agatha Christie film Murder Ahoy was filmed here, as was the 1964 film Crooks in Cloisters. An episode of the TV series Hornblower was also filmed here.

As well as this St Mawes is considered to be home to one of the oldest small Cornish bakeries in the county of Cornwall. The St Mawes bakery is estimated to have been founded in 1912 by the Curtis family (the current owners) making it 100 years old in 2012. Although the bakeries premises is probably much older (going back to the 1800s). Also in planning law the business exists as an eco business due to the fact that all products are made on a site less than 300 M away from the place of sale and are therefore transported by hand.

In March 2012 a new limited edition of Monopoly was published, with ferries replacing railway stations and a variety of property for sale from the butcher, the harbour office, the sailing club and several hotels and guest houses, to three beaches and Lamorran gardens.

In the novels by Robert Galbraith, detective Cormoran Strike partly grew up in St Mawes, and strongly associates happy parts of his childhood with the town. 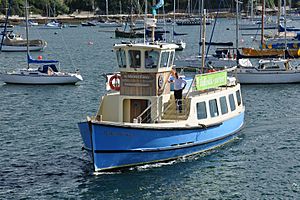 The St Mawes Ferry at Falmouth

A year-round ferry provides a service to Falmouth, which is less than a mile away by boat, but due to its proximity to the Fal estuary it is some 30 miles (48 km) away by road. The Place Ferry links the South West Coast Path and operates from Good Friday to the end of October.

All content from Kiddle encyclopedia articles (including the article images and facts) can be freely used under Attribution-ShareAlike license, unless stated otherwise. Cite this article:
St Mawes Facts for Kids. Kiddle Encyclopedia.