Stafford County (standard abbreviation: SF) is a county located in the U.S. state of Kansas. As of the 2020 census, the county population was 4,072. Its county seat is St. John. The county is named in honor of Lewis Stafford, captain of Company E, First Kansas Infantry, who was killed at the Battle of Young's Point in Madison Parish, Louisiana on June 7, 1863.

The boundaries of Stafford County were defined by the Kansas Legislature of 1870 but for several years, the county remained unorganized. The Legislature of 1875, with the intention of obliterating the county from the map, gave the territory in Stafford County to other counties. They gave the portion in Range 15 West to Pawnee County; the portion included in Ranges 11, 12, 13 and 14 to Barton County; and the south half of the county, excepting the portion in Range 15, was added to Pratt County. But after each of the counties had taken its part, a strip six miles wide and twelve miles long (two townships) remained as Stafford County. This was the condition of the county until April 25, 1879, when, by a decision of the Supreme Court, the act of the Legislature dividing the county was declared unconstitutional and the county was restored to its original boundaries. 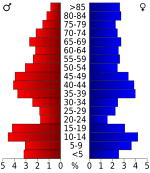 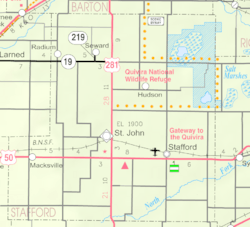 Stafford County is divided into twenty-one townships. None of the cities within the county are considered governmentally independent, and all figures for the townships include those of the cities. In the following table, the population center is the largest city (or cities) included in that township's population total, if it is of a significant size.

All content from Kiddle encyclopedia articles (including the article images and facts) can be freely used under Attribution-ShareAlike license, unless stated otherwise. Cite this article:
Stafford County, Kansas Facts for Kids. Kiddle Encyclopedia.