Sumiswald is a municipality in the district of the Emmental administrative district in the canton of Bern, Switzerland. It is mostly known for being the manufacturing location of the Swiss railway clock. 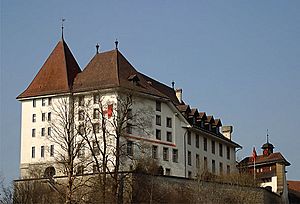 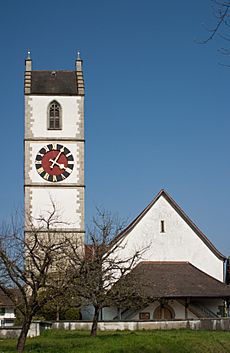 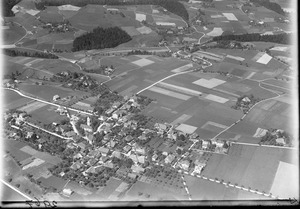 Sumiswald is first mentioned in 1225 as Smoldeswalt. The name either comes from the Germanic settler "Suomolt", the Latin term summa vallis ("bank over the valley") or the designation "Zum Oswald" ("to Oswald"), because in the Middle Ages there was a chapel in Sumiswald dedicated to Oswald of Northumbria.

The area was probably settled during the Middle Ages, when several castles were built. From 1225, Sumiswald was a commandery of the Teutonic Knights of the "Ballei" Swabia-Alsace-Burgundy. In 1525, the town bought its way out of serfdom, but stayed a part of the Teutonic Knights even after the Protestant Reformation was introduced in 1528; Sumiswald was sold to the city of Bern for 36,000 Reichs thaler in 1698.

The village Church of St. Mary was first mentioned in 1225 along with the village. The old church was replaced with a new building in 1510-12. When Bern adopted the new faith of the Protestant Reformation, the village converted and the municipality acquired the patronage rights over the church.

Hans Haslibacher, who was executed on October 20, 1571 in Bern because of his Anabaptist conviction came from Sumiswald; he was the last execution of an Anabaptist in Bern.

The village was surrounded by a number of alpine meadows and seasonal alpine herding was an important part of the local economy. The first contracts governing ownership and access to the meadows are from 1498. In the following century many of the high forests were cleared to provide additional meadows for grazing. In 1572 the municipality passed laws to limit further clearing to prevent total deforestation. The settlements of Wasen, Ey and Grünen all developed out of small seasonal herding camps. In the following centuries ownership of the fields in the valley and the alpine meadows became firmly entrenched, creating a class of wealthy landowners and a class of poor artisans, day laborers and sharecroppers. The poor were forced to begin small scale spinning and weaving to supplement their income. By the 18th century, Sumiswald, was a local center of the yarn and cloth trade as well as horse breeding and cheese production. It attempted to become a market town, but other surrounding market towns blocked the attempt five times in the 18th century. Finally in 1801 Sumiswald was granted the right to hold five yearly fairs.

Following the 1798 French invasion, Sumiswald became the capital of the Helvetic Republic district of Unteremmental. After the collapse of the Republic and 1803 Act of Mediation it joined the newly created Trachselwald District. In the 19th century the local yarn and cloth industry declined and was replaced with other industries including manufacturing musical instruments. The construction of the Emmental road in 1875, the Ramsei-Huttwil railroad in 1908 and the Sumiswald-Wasen rail line in 1915 brought new factories and industry to the municipality. Today Sumiswald is a regional cultural and economic center, with workers commuting into the municipality from surrounding villages. There are secondary schools in Sumiswald and Wasen as well as a retirement home. 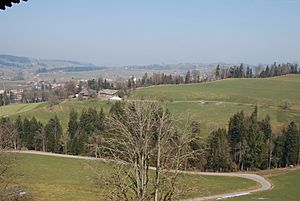 Sumiswald consists of three villages (Sumiswald, Grünen and Wasen), two hamlets (Gammenthal and Griesbach) and scattered farm houses and alpine meadows in the lower Emmental. It is one of the largest municipalities in the canton.

From the same survey, housing and buildings made up 2.7% and transportation infrastructure made up 1.7%. A total of 43.4% of the total land area is heavily forested and 2.9% is covered with orchards or small clusters of trees. Of the agricultural land, 11.3% is used for growing crops and 25.0% is pasturage and 10.9% is used for alpine pastures. All the water in the municipality is flowing water.

On 31 December 2009 Amtsbezirk Trachselwald, the municipality's former district, was dissolved. On the following day, 1 January 2010, it joined the newly created Verwaltungskreis Emmental.

The blazon of the municipal coat of arms is Per pale Argent a Bar Gules and of the last. 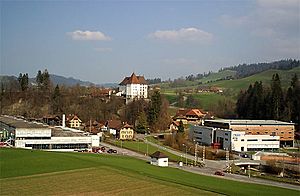 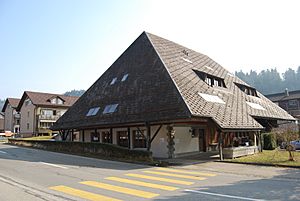 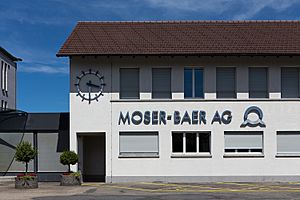 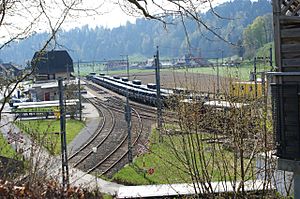 Sumiswald-Grünen rail station. Sumiswald is a net importer of workers

The clock manufacturers Moser-Baer, manufacturer of the Swiss railway clocks, can be found in Sumiswald.

Agriculture, forestry or lumber production, manufacturing and construction are the other main industries.

The Gasthof Bären (Bären Inn), the village rectory and the Swiss Reformed church are listed as Swiss heritage site of national significance. The entire village of Sumiswald is part of the Inventory of Swiss Heritage Sites.

The glass windows of the church Mariekirche depict benefactors with their patron saints.

The old Teutonic Knight castle is somewhat outside of Sumiswald. It was endowed in 1225 with the condition that a hospital be housed in it, therefore the castle's name is Spittel.

It is said that all the men in Sumiswald could have taken a seat at the large table in the inn "Bären" after the plague in 1434. 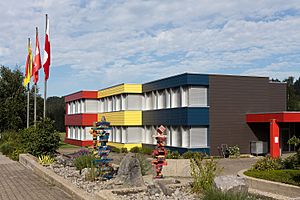 A primary school in Sumiswald

All content from Kiddle encyclopedia articles (including the article images and facts) can be freely used under Attribution-ShareAlike license, unless stated otherwise. Cite this article:
Sumiswald Facts for Kids. Kiddle Encyclopedia.