Kids Encyclopedia Facts
Not to be confused with toromiro.

Thespesia populnea, commonly known as the portia tree, Pacific rosewood, Indian tulip tree, or milo, among other names, is a species of flowering plant belonging to the mallow family, Malvaceae. It is a tree found commonly in villages of Tamil Nadu and on coasts around the world. However, the Portia tree is probably native only to the Old World tropics. It was introduced to the Pacific Islands from Island Southeast Asia by prehistoric Austronesian voyagers.

Thespesia populnea is native to the Old World tropics and is adapted for sea dispersal and growth in island environments. Like the related Talipariti tiliaceum, it was one of the main sources of bast fibers for the production of cordage and wood for Austronesian outrigger ships and carving. Though the plant seeds can survive for months on sea currents, no remains of T. populnea have been recovered from Polynesia prior to the Austronesian expansion (c. 5,000 BP), thus it is regarded as canoe plant, deliberately carried and introduced by Austronesian voyagers in the islands they settled.

The trees were regarded as sacred in Polynesian culture, and were commonly planted in marae sites along with trees like Ficus, Fagraea berteroana, Casuarina equisetifolia and Calophyllum inophyllum. 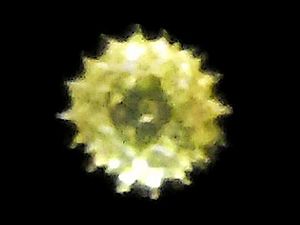 Pollen of T. populnea viewed under a light microscope

The heartwood of the Portia tree is dark reddish brown to chocolate brown and has a specific gravity of 0.55 to 0.89.

Portia tree is known as milo or miro in Polynesian languages. It is popular in Hawaii for woodworking (commonly turned into bowls) because of the range of colours expressed (tan, through yellow, to red). Traditionally it was planted in sacred groves and used for religious sculpture throughout eastern Polynesia. In Tahiti, Milo wood is used in the making of the to'ere (slotted wooden drum), used in traditional Tahitian tribal drumming. Makoʻi was used for the rongorongo tablets of Easter Island. Since the advent of aluminium-hulled boats in the 20th century, Pitcairners have made regular trips to Henderson Island to harvest miro wood. Usually they venture to Henderson only once per year, but may make up to three trips if the weather is favourable. Pitcairners carve the wood into curios, from which they derive much of their income.

In South Asia, it is used to make the thavil, a Carnatic musical instrument of South India. The flower of the Portia tree played a part in Sri Lanka's independence struggle, when it was sold on Remembrance Day by the Suriya-Mal Movement instead of the poppy to aid indigenous ex-servicemen. The wood from the tree was used by early Tamil people to make instruments in ancient Tamilakam.

All content from Kiddle encyclopedia articles (including the article images and facts) can be freely used under Attribution-ShareAlike license, unless stated otherwise. Cite this article:
Thespesia populnea Facts for Kids. Kiddle Encyclopedia.